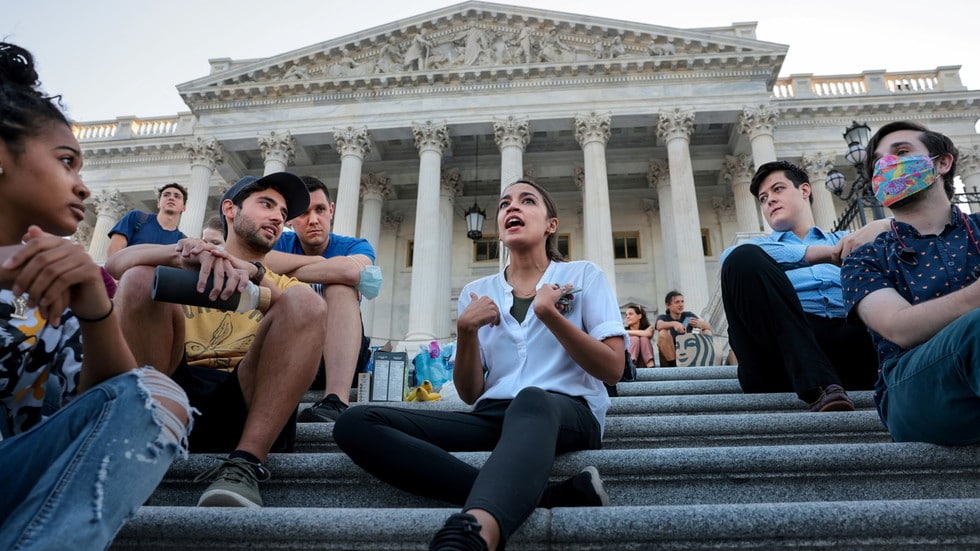 Rep. Alexandria Ocasio-Cortez is facing criticism after a video caught her masking up for a photo and then seemingly immediately removing the face covering when the picture was taken.

The video, first shared by Breitbart, shows Ocasio-Cortez joining protesters on the steps of the US Capitol. Initially, very few participants appear to be wearing masks while chatting with AOC on the steps.

Rep. Ed Markey (D-Massachusetts) also appears in the video and dons his mask for a photo with the protesters supporting a new eviction moratorium. Ocasio-Cortez also sports a grey mask for the photo, while squeezed between numerous maskless activists. Markey and Ocasio-Cortez both appear to remove their face coverings as soon as the picture is snapped.

Washington, DC recently reinstated its mask mandate in response to rising Covid-19 cases. The new mandate states that anyone over the age of two must be masked in indoor settings. Ocasio-Cortez and Markey were outside when the photo was taken, but health officials have warned that big crowds can cause spreads, especially with the more aggressive Delta variant accounting for more and more cases.

Ocasio-Cortez is fully vaccinated, but health officials have also warned the Delta strain may be able to spread from vaccinated individuals, and there have been numerous ‘breakthrough’ cases among the vaccinated, including Sen. Lindsey Graham (R-South Carolina) this week.

RELATED CONTENT: The Politics of Spectacle: On Eviction Moratorium, The Squad Talks the Walk

The congresswoman masking for a photo in an outdoor setting caused confusion, and critics accused the Democrat of engaging in “theater” to fear-monger.

“I heard the virus can only be spread during pictures,” one Twitter user commented about the video.

“So… @AOC… about the masking… are we missing some important context here?” another added.

Ocasio-Cortez has been one of numerous Democrats to promote masking even after vaccination, something that has received pushback from conservative critics.

In May, the New York congresswoman encouraged people to continue masking even after being vaccinated and said she would do so in “shared indoor public spaces.”

She called masks a “nice accessory” and said even if she felt sick with something other than Covid, she would mask up.

“Mask wearing is also something I’ll probably continue doing overall from time to time if I feel like I might be coming down with something and don’t want to spread it,” she said.