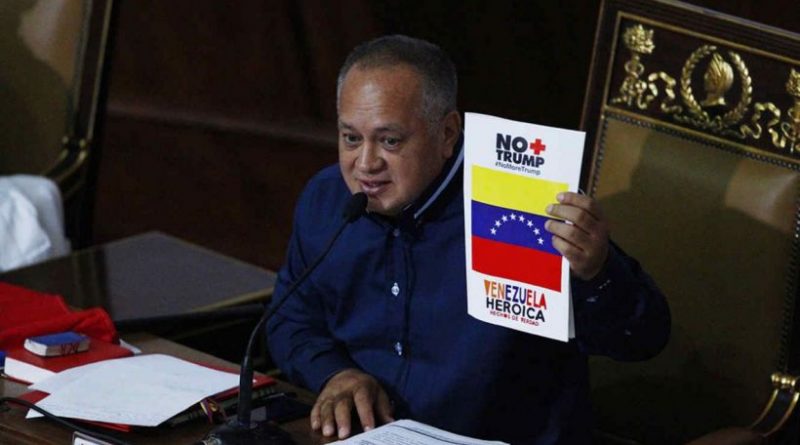 At the beginning of this week, the news agency The Associated Press (AP), in the hands of the journalist Joshua Goodman, published a piece written from Bogotá about secret contacts in Caracas, among the vice president of the United Socialist Party of Venezuela (PSUV) Diosdado Cabello and a person close to the Trump Administration.

The first thing that the report highlights is the anonymity of the senior US official; it does not reveal the name of the informant for fear of alleged reprisals.

The article caused a stir and even concern among some influencers from Venezuelan anti-Chavismo on Twitter, as in the case of Carla Angola, that two hours after Goodman’s publication, gave her impressions on the news highlighting that this approach is not a negotiation with the “regime” but, according to her notion, it is about how the United States uses a “knife fight” inside Chavismo to gain some sort of advantage.

In this way, Angola and other media operators of anti-Chavismo seek to create a confusing and intriguing trend on the supposed approach between both actors, even if it is normal that there are communication channels in confrontational contexts. It is elementary in a war.

JOSHUA GOODMAN AND HIS OBSESSION WITH VENEZUELA
Joshua Goodman is a native of Cleveland, and since 2013, AP appointed him as News Director for Los Andes, devoting most of his articles to Venezuela.

This journalist has worke for Bloomberg News, reporting on Latin America; these included works on hypothetical Chinese financing for Comandante Chavez’s campaign in 2012.

Also, his notes on Venezuela have been republished since 2013 by La Nación , and since 2015 by The Times of Israel, for example.

Goodman is remembered for a press conference offered by President Nicolás Maduro in 2014 on the murder of Deputy Robert Serra; he asked questions out of context, dedicated directly to the oil industry in Venezuela, signaling the end of the oil boom, forecasts of falling oil prices and economic consequences for the country.

In addition, last June this journalist conducted an interview with the fugitive Iván Simonovis, recounting his escape spiced with Hollywood style characteristics. It served to disguise the former commissioner as a “super cop”.

After counting the different articles made by Goodman, at least during the last eight years, it is clear that his reflections are dependent on anti-Chavista rhetoric.

His last report does not differ from that line, because Goodman points out that it is unknown if President Maduro approved such contacts or not, discrediting the talks that the Trump Administration has had and that part of the US establishment had (such as former Senator Bob Corker) with the different representatives of the Bolivarian Government team and, above all, trying to generate suspicions within Chavismo.

Even Goodman completely ignores in his “investigation” a key element in this plot: the repeated occasions in which the Venezuelan President has called for dialogue.

CLAIMING LEGITIMATION? 21ST CENTURY JOURNALISM
Goodman’s “scoop” shows various information gaps, which intentionally follow the tone of gray propaganda maneuvers (since it avoids the use of declared sources). In this case, he sees the objective of generating internal fractures in Chavismo, challenging its greatest strength: political unity.

This [tactic] is no stranger to the manual of actions that have long been developing among groups that are part of the US elite against the Chavista government. Recall the secret report published by WikiLeaks about a 2006 cable written by the then US ambassador to Venezuela, William Brownfield, who narrates his 5-point strategy.

Achieving the political division of Chavismo is one of Brownfield’s main objectives.

In this sense, the leader Diosdado Cabello, in the weekly press conference of the PSUV, after first hearing the question of a Venezuelan journalist about the controversy of the AP report, satirically answered that the meeting is secret, making allegory to the multiple times in Goodman points out the anonymity of all informants and the characteristic of being a secret meeting.

Similarly, Cabello clarified that he has four conditions to attend talks with representatives of the United States government:

Then, the South African correspondent Christopher Torchia of AP, the same agency that published the “exclusive”, asked for a confirmation of those meetings, which Cabello objects to the reasoning for seeking that confirmation, since it AP was responsible for confirming what they [themselves] disclosed.

All in all, the information complains against the legitimacy of its enunciator. “Unfortunate,” said Cabello.

The leader concluded that, for months, public and private conversations have been held, authorized by President Maduro, and he recalled the public meeting in Haiti with Thomas Shannon, highlighting the willingness of the Chavista leadership to hold talks in order to preserve peace In Venezuela.

MEETINGS ARE CONFIRMED
On August 20, at an event in the state of La Guaira, the Venezuelan President confirmed that, under his authorization, senior officials of the Bolivarian Government have maintained contact with representatives of the White House for months.

In parallel, the magnate US president, addressing some media outlets in Washington, confirmed the aforementioned talks with several high-level representatives of the Venezuelan government, without appointing any spokesperson for the opposition.

It is obvious that the AP piece, based on the methods of gray propaganda, has a mix of fake news and real information collected from different sources.

In the case of the news that concerns us, the real fact was the rapprochement between the two governments; however, its extension is done with other false information and details, or with omissions that give context and contrast to the subject.

This builds a confusing context in the middle of the process of collecting signatures for “No More Trump”. This report adds to the actions to consolidate the psychological warfare efforts aimed at undermining Chavismo in Venezuela on all fronts.

BUT THEY WERE LATE
On August 21, early in the morning, National Security Advisor John Bolton tried to give oxygen to the situation, posting on his Twitter account that the talks are taking place behind President Maduro’s back, allegedly negotiating his exit from power.

As the President has repeatedly stated, to end the pilfering of the Venezuelan people’s resources and continued repression, Maduro must go. The only items discussed by those who are reaching out behind Maduro’s back are his departure and free and fair elections.

Bolton contributes in this way to the objectives of the gray propaganda, giving a character of intrigue to the information even when the conversations were authorized by the Venezuelan head of state.
On the other hand, and without being taken into account by the AP scoop, Guaidó said that he allegedly knew about these meetings and that, according to him, they were part of a joint opposition strategy with the Trump Administration.
How, having knowledge of these conversations, does he belatedly declare about this controversy if they supposedly contribute to the coup strategy of anti-Chavez? Obviously, he is out of play.
It does not seem uninteresting that the opposition leadership does not exist in this high-level communication channel. With the suspension of the dialogue with the Venezuelan opposition due to the last Executive Order of the Trump Administration, the talks take place on another scale between both governments and directly, without Guaidó’s spokesperson as an intermediary.
That’s what Diosdado Cabello was referring to when he said the “owners of the circus.”