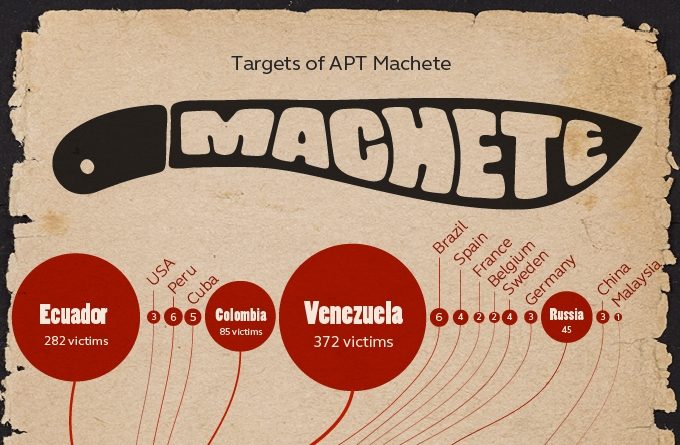 During his participation in the radio show “Al Aire”, Ossa highlighted the infection of “hundreds and hundreds” of computers and gigs of data stolen from confidential data banks in government agencies with the malware “Machete”, recently discovered by the Slovak IT security company ESET.

“There is a discovery by ESET Company, a Slovakian computer security company (…) has just discovered a computer virus called Machete, a virus that has an incidence in Latin America, but the highest number of infections have been precisely in Venezuela,” the computer and open source expert warned.

The Russian antivirus giant Kaspersky first informed about the virus in 2014 and then, Venezuela was the most affected country followed by Ecuador but, in recent months, experts have raised the same concern.

“Machete”, which infiltrates through deceptive emails, is capable of making screenshots, audio and video recordings and extracting documents from infected terminals, sending them to remote servers.

For Ossa, Venezuela is under an “excessive” cyber attack promoted by the United States, and which is complemented by economic sanctions, recently escalated by Donald Trump’s regime.

The cybersecurity firm ESET explained recently that they have analyzed more than 50 compromised computers. Among these, the vast majority – approximately 75 percent – belong to senior officers of the Venezuelan army. The main objective of the hacker group, which is very active and effective, are those confidential documents in which information regarding the positioning and movement of troops. However, they are also interested in data on education, police security and foreign affairs. In addition to Venezuela, ESET claims to have found Machete in the teams of other South American states; like Ecuador, Colombia or Nicaragua, although in a lower number.

“We can say, with all responsibility, that our people have been the object, for several years, of an excessive attack and that they are indisputably subjects of this unconventional war. It is not the only one obviously, it is not the only issue that is on the table; the economic blockade greatly affects our population in their daily lives, but it is interconnected with other elements, everything is integrated,” Ossa explained.

He also stressed that only the use of open source could protect or reduce the effects of cyberattack against the country.