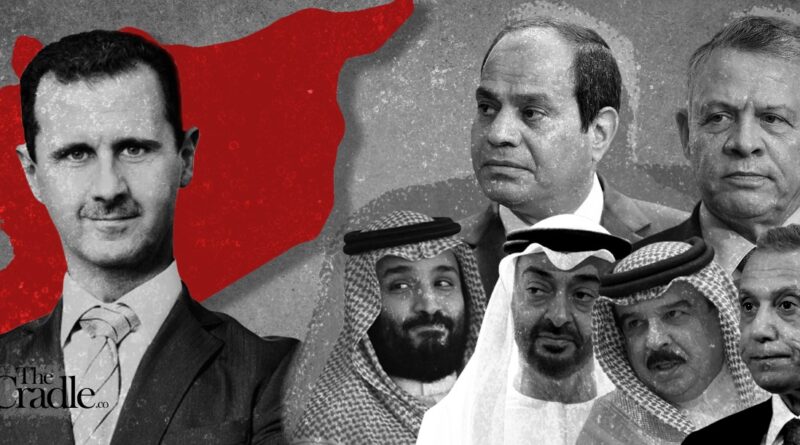 The traditional position of Damascus as regional mediator has been sorely missed in tumultuous West Asia. Now Arab states are lining up to re-establish relations with Syria, but face a hard American veto on diplomacy.

It has been ten long years since the US and its regional allies launched their proxy war on Syria, a war that caused immeasurable human tragedy and, with Syria’s diminished political role, a dangerous regional imbalance. And yet, the Gulf States and Jordan are only just waking up to the perils of leaving Syria out in the cold.

Historically, since the collapse of the Soviet Union, Damascus has maintained a high level of diplomatic proficiency and influence, even compelling the US to communicate through Damascus as a means of contact between regional powers.

Modern Syria has effectively been a bridge between the Arab states of the Persian Gulf and Tehran, a bulwark against Turkish expansionist efforts in the Arab world, and a key political factor in securing a minimum level of stability in the region.

But in 2003, the Gulf States threw their collective weight behind the US in its war on Iraq, and then since 2005, its machinations against Syria. In 2011, trembling in the wake of Arab uprisings, key Gulf States fully supported the international and terrorist proxy war on Syria, without understanding the repercussion of Damascus’ regional decline on their own fates.

Of the US’ staunchest Arab allies, only Egypt, with its deep political heritage, maintained a minimum of political-security relations with Syria, even during the days of Egypt’s Muslim Brotherhood President Mohamed Morsi.

Today, the Gulf States and Jordan are stuck hard between their own geopolitical and economic interests and the aggressive US decision to subjugate Syria at any cost. Their gamble on Syria’s collapse through either war or economic blockade has failed, and attempts to alter Damascus’ position on Israel, Palestine and the Resistance Axis have been counterproductive. If anything, the Syria-Iran-Hezbollah relationship has solidified and been empowered through years of fighting from the same command center.

The bloody war waged by Saudi Arabia and its allies on Yemen soon morphed into a strategic threat to the security of Saudi Arabia and to the commercial sea routes of the Gulf States. Saudi influence in Lebanon receded from its usual playground of political-economic affairs, and left Riyadh with only minor tools to sabotage and shake stability. More importantly, Syria has now become an advanced base for Russian forces, giving Moscow a strategic view of the Mediterranean and a corridor in the Chinese Belt and Road Initiative.

When Syrian forces liberated Deir Ezzor from its mercenary ISIS armies; when conflict hotspots resolved in favor of the Syrian state; when the Muslim Brotherhood’s influence crossed deep into Riyadh’s comfort zones; when Turkish pressures amassed; and when the military resistance by Yemen proved far too mighty to break; only then did the Saudis slowly start to back off.

RELATED CONTENT: Syria’s Truly Been a Site of World War, Their Vote for Peace & Against Foreign Interference Must be Respected

Meanwhile, countries such as Oman, Algeria, Tunisia and Iraq, who had maintained diplomatic relations with Damascus throughout the mayhem, started demanding Syria’s return to the Arab League.

The first step in Riyadh’s ‘change of heart’ was an undeclared security–political openness to Damascus. The Saudis have slowly initiated secret lines of communications, the most prominent of which are alleged meetings between the head of the Syrian National Security Office, Major General Ali Mamlouk, and Prince Muhammad Bin Salman, and the visit of the Director of Saudi Intelligence Khaled Humaidan to Damascus in May this year.

On the agenda of the Saudi-Syrian contacts are two main items: reining in Turkey and easing tension with Tehran. An Arab diplomatic source confirms that “the Saudis would have almost opened their embassy in Damascus, had it not been for the American pressure that put brakes on the Saudi initiatives.”

The UAE, which maintained back lines of communication with Syria during the 10-year war, is today at the forefront of efforts pushing Arab states toward normalizing relations with Damascus. This Emirati role, as described by more than one observer, is driven by Abu Dhabi’s desire to curb Turkey’s regional ambitions and by a need to balance out its excessive coziness with the Israeli enemy. Sources also confirm that the UAE would have taken more impulsive steps toward Damascus, had it not been for American pressures.

As for Qatar, which still maintains hostility toward Damascus stemming from its strong Muslim Brotherhood affiliation and its functional relationship as a Turkish claw in the Persian Gulf, Doha has rolled back the inflammatory, often sectarian, language it used during the war on Syria. As reflected in Al-Jazeera’s more recent coverage, Qatar has considerably changed its tone, now utilizing the official terminology of the Syrian Arab Army SAA) and President Bashar al-Assad in its reporting. Despite this, a Syrian source say that it is “Damascus [which] has reservations about the return of relations with Doha, and not the other way around.”

In Jordan, King Abdallah’s throne is increasingly vulnerable, not to his enemies, but to his allies in the Gulf and Israel, and he has moved to strengthen his ties with Egypt and Iraq and to reestablish a relationship with Syria. Sources say Abdallah discussed normalization during his last visit to Washington, where he attempted to soften Washington’s position on Damascus. Jordan re-opened the Naseeb-Jaber border crossing to Syria in April – a vital lifeline to Jordan’s pandemic-hit and flailing economy – only to shutter it again in July when violent clashes broke out between Daraa militants and the SAA. A ministerial meeting in Amman, due to be held on 8 September between the energy ministers of Syria, Lebanon and Jordan, looks to be yet another step toward breaking the diplomatic and political siege on Syria.

In August, Iraqi Prime Minister Mustafa Al-Kadhimi expressed enthusiasm about inviting President Assad to participate in his heavily-publicized Baghdad Summit. It wasn’t to be. Iraqi sources told The Cradle “The French and the Turks obstructed Syria’s participation in the Baghdad summit.” French President Emmanuel Macron, appears hellbent on establishing some international credit – and the desirable optics – for France’s presidential elections in seven months. The French hadn’t spent years working to unseat Assad, only to have him show up in Baghdad standing next to their president in photo ops. Macron’s obstruction is not limited to Iraq, however, but extends to Lebanon, where the French are engaged in some serious arm-twisting to prevent an official Lebanese rush toward Damascus. As mentioned, Turkey also weighed in to nix Assad’s Baghdad visit in accordance with Erdogan’s continued hostility towards Syria, and perhaps also to outmaneuver his Emirati foes.

Of all places, the American veto on Arab normalization with Syria may ultimately meet its demise in Lebanon. Hezbollah Secretary-General Hassan Nasrallah’s announcement that he will import Iranian fuel for the besieged Levantine state takes an axe to the meticulously-constructed US bans on Arab trade with and through Syria. Nasrallah’s decision embarrassed Washington and its clueless ambassador to Beirut, who immediately rushed to unilaterally lift the ban on fuel imports via Syria – as long as they travelled through Jordan from Egypt. The Lebanese, ultimately, won’t care where their much-needed energy supplies comes from, but this American move showed them who is actually responsible for their shortages.

General Security chief, Major-General Abbas Ibrahim, has tried several times to open up these transport channels, but failed because of Lebanese fears of American sanctions. Likewise, Lebanon’s President Michel Aoun, whose every effort and intention was foiled by a US veto. Whatever the outcome of the negotiations to import gas and electricity from Egypt and Jordan to Lebanon via Syria, the biggest beneficiary of this American opening is Damascus, which knows how to take advantage of opportunities when they fall in its lap. Syria will undoubtedly use this crack in the door to re-engage participants on various vital issues:  demarcating maritime borders with Beirut to extract oil from The Syrian-Lebanese coast, and arranging transit affairs from the Syrian Sea to the Persian Gulf through Jordan – effectively breaking the US-imposed ‘Caesar Act’ that prohibited regional financial, economic and political dealings with Damascus.

The biggest loser in all matters – from its thoroughly incompetent Afghanistan withdrawal to the collapse of its Syrian siege – is the United States of America, which will seek, in parallel with continuing – but now in the open – pressure on Lebanon, to try to re-engage with Syria. US relations with Syria will never be in earnest, always with malicious intent to serve its own geopolitical ambitions at the expense of Damascus’ allies and the Palestinian issue, and so will amount to nothing other than providing further legitimacy for the Syrian state.

With Syria’s military and political stabilization now a near certainty, most Arab countries that had severed relations with Damascus have, to varying degrees, reinstated their diplomatic representatives in Syria, either by sending an ambassador or a chargé d’affaires back to the Syrian capital.

Many European countries, among them the Czech Republic, Austria, Greece, Italy, Spain and Romania, have either started or have expressed a plan to re-open their embassies in Damascus.

Syria’s return to the Arab League remains the last hurdle in the full spectrum of eventual Arab rapprochement, something that all Arab nations – and not just Syria – urgently need. The US, however, is still trying to hold the reins of that horse tightly, refusing to allow Saudi Arabia to make its decision independently. But for the rest of the Arab world and beyond, a break from that suffocating noose could well be on the horizon.

Firas Al-Shoufi is a political and security affairs writer and a journalist at Lebanon’s daily Al Akhbar newspaper.

Featured image: Arab leaders eye diplomatic normalization with Syria, but a US veto obstructs their path. Photo Source: The Cradle