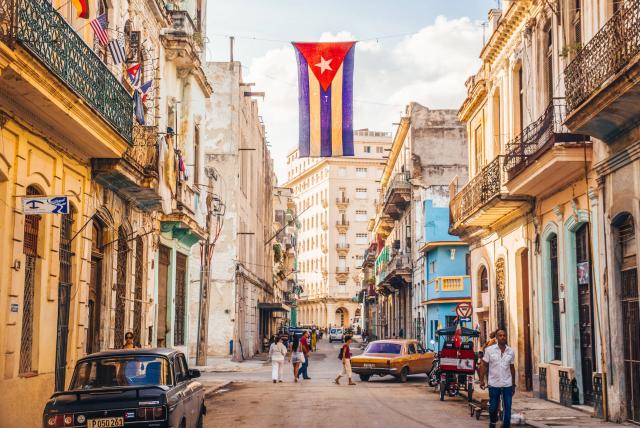 Ramón Labañino, who has a degree in Economics from the University of Havana, is one of the five heroes who in the late 80s and early 90s infiltrated anti-Cuban organizations in the United States to detect and prevent terrorist attacks against Cuba and the Revolution. The five were captured by the FBI and sentenced in illegal trials to different penalties; in the case of Ramón to life imprisonment plus 18 years in US prisons. It was thanks to the resistance and revolutionary perseverance of Fidel Castro’s government that they were released on December 17, 2014, in the framework of a prisoner exchange between Washington and Havana.

Recognized in 2015 as a Hero of the Republic of Cuba, he is currently the vice president of the Union of Economists and Accountants of Cuba and continues his work with unwavering support for the Cuban Revolution. To talk about the events of July 11 just past, in the program El Taller, Labañino graciously agreed to analyze and give his vision of the moment the island is living. Cris Gonzalez, editor of Correo del Alba, conducted the interview.

We have seen on television and social networks very worrying situations, violent protests mainly led by young people, what is happening in Cuba?

We are experiencing an attempted soft coup d’état, according to Gene Sharp’s own manual entitled From Dictatorship to Democracy. Each and every one of the rules is being applied to us. For example, that text says that there are five main stages: 1) the softening up; 2) the demoralization of the government; 3) the heating up of the streets; 4) the attempt to use other methods of struggle; and 5) the breakdown of what would be the institutional government.

In Cuba we are experiencing this brutal media invasion with the use of fake news that have been replicated throughout the planet presenting a reality that is not as it is painted. It has been applied in three phases: first with the creation of the hashtag #SOSCuba, based on situations that were being experienced in our country; second, several personalities were invited to join that movement; and third, with the incitement to violence, to take to the streets.

In the midst of a situation where the commercial, economic and financial blockade from the United States has been tightened in all senses, Cuba cannot use the dollar in any international transaction, nor can it purchase any article with dollars, transactions through banks are penalized. Cuba cannot buy any article that has 10% of raw materials from the United States. If a ship arrives in a Cuban port to bring oil or any type of merchandise, in six months it cannot dock in any US port. During the Trump administration 243 measures were applied that tried to increasingly strangle the economy against Cuban companies that generate more resources to the country; the Biden administration has not changed anything, on the contrary.

What are these measures?

First, to deny the sending of remittances from Cuban relatives from the United States to Cuba, which hits the Cuban people very hard. Sanctions have been imposed against cruise ships coming to the country. Hotels, which in some way have to do with the United States, have also been penalized, hotel and tourist investment chains so that they will no longer invest here. An almost infinite list of Cuban companies that produce fundamental goods and services for the population; the resources that are there for the country are on a blacklist that the Trump government put in place and persist.

At this juncture we have the COVID-19 pandemic, which has hit us very hard, especially with the new Delta variant, which is undoubtedly much more virulent and deadly.

What is your assessment of the political and social climate today?

Today the situation is calm, in Cuba we are calm, with social harmony, we are a country of peace. Never in the 60 years of the Revolution have we seen such unpleasant things as we experienced on July 11. Everything has been orchestrated through social networks; it has been a media coup that has been organized and mercenaries have been paid to demonstrate in the streets, but there was nothing peaceful about the demonstrations. The response was given by the people themselves who took to the streets to defend every corner of Cuba.

Was there any delay in the Cuban people taking to the streets and what was the response of the CDRs?

Undoubtedly the plan that was executed coordinated several factors and many people at the same time throughout the country, this was a very well orchestrated issue and even in recent days it has been discovered that the CIA is behind these subversive plans; there is an advertising company in Miami that was in charge of the online marketing of the protests, of how to send this type of secret information to the different groups, paying money to incite violence, they used unconventional methods, quite discreet.

The response of our people and the CDRs in the front line was excellent. Our president immediately mobilized to the area where the events were taking place, in San Antonio de los Baños, we went through several neighborhoods of Havana and, in places where the situation was a little complex, when the revolutionaries, the CDRs and the leaders arrived, everything calmed down.

We are prepared for this now, it is a new experience, we had never lived through an event like this, we have the knowledge and the preparation we learned from the soft coup they tried to carry out in our beloved Nicaragua, what happened in Bolivia, in Venezuela with the supposed humanitarian aid, that behind it were the military tanks crossing the border, behind it came an invasion. That is why we are not going to accept humanitarian aid under those precepts of militarization and above all of invasion of our homeland.

The dissemination of news about Cuba in the rest of the world is based on computer programs (bots) that multiply false news in seconds, a denunciation made by Foreign Minister Bruno Rodríguez.

We are in the presence of an international media dictatorship, the big media are in the hands of imperialism and now the social networks and the alternative media also use them in a masterful way. They have the capacity, through data engineering, bots, to replicate a tweet millions of times, which is what they have done against Cuba. A ruthless attack on social networks and in the media to show a Cuba that is not real.

It is a double blow, on the one hand, they try to show that in Cuba the situation is critical and, on the other hand, we have an invasion in our networks to disarticulate the computer systems so that, even we cannot respond to the lies. The interesting thing is the double purpose, not only that they attack us, but then we cannot defend ourselves because the media belong to them. They are media created by them and they control them at will. Within the CIA, for example, they have a special operations group that is in charge of cyber attacks of this type and there is a group called the Political Action Group (GAP) that organizes, structures and directs this type of attack. So, it is not easy to detect, not any country can detect attacks like this.

These groups that came out to protest were demanding economic issues, some logical demands, what are the Government’s proposals to overcome these shortcomings?

Undoubtedly there are problems in Cuba, limitation of products due mainly to the blockade and the international economic situation. Latin American economy is going to shrink this year by around 9%, according to data from the Economic Commission for Latin America and the Caribbean (ECLAC), and the world economy has shrunk by around 5%, while our Gross Domestic Product (GDP) fell by 11% the previous year, therefore, the pandemic has hit us all because we have had to live locked up and we cannot produce.

One of the economic measures is that all kinds of food, medicines and toiletries can be brought into Cuban airports, without limits and at no cost, until December 31. The possibility of exporting and substituting imports will be expanded. Resources are being invested in production, especially to make our fields produce. We have an inexhaustible source, thanks to the free education system, for example, of the software industry, of data engineering, of the creation of cell phones, we already have some attempts to create Cuban cell phones, and above all it is necessary to listen to the people and give them answers.

There is no need for a violent demonstration to express one’s wishes, here there are thousands of mechanisms to express oneself, those who came out violently have no justification, in Cuba that is not the right way to go about it.

Tourism has been affected by the pandemic, when will you open the doors of this sector?

Cuba, in spite of the blockade and of being an underdeveloped country with thousands of limitations, has created its own vaccines for its population and we have five vaccine projects—there is even a nasal one—and some of them have already been approved by important international organizations. The priority is the Cuban people; we hope that by December we will all be vaccinated.

We are also in the process of creating a vaccine for children from three to 18 years of age. After that, tourism will begin, organized and regulated because, without a doubt, it is bringing us pandemics from Europe and other parts of the world.

If any country knows about solidarity, it is Cuba. I remember that when the pandemic started, there was a cruise ship that nobody wanted to receive because of the terror of contagion and Cuba received it; that was one of the greatest demonstrations of solidarity and humanity. And of course the White Coats Army.

The Cuban Henry Reeve Medical Brigade has served in more than 54 countries. It has saved lives all over the world; in Europe there are huge movements asking for them to be awarded the Nobel Peace Prize. That is what Cuba does, we bring love, peace and friendship to the people. We do not bring cannons or death, we save lives.

Some dare to say that the blockade does not exist. But it is one of the oldest in the world, with the largest number of sanctions.

It exists, it hits us and it is not bilateral, as the United States claims; the blockade affects all countries, anyone who dares to have relations with us is sanctioned. Cuba cannot buy anything, we have to go to India and China to buy rice or products, when we could buy them in the most natural market, which is the United States.

And even blockaded, Cuba has five vaccines.

Just like we have free health care, free education, a healthy population. We have first world standards of living in terms of health. Why can’t Cuba sell, for example, vaccines not only against the coronavirus—we have vaccines against lung cancer, HEBERPROT-P which is a magnificent treatment for diabetic foot ulcers; in the United States there are people with that disease whose legs and feet are amputated every day and in Cuba they can be saved. Why don’t they do it? That is how the blockade works against the people of the US.

Finally, what is the Helms-Burton Act about?

The Helms-Burton Act was passed by the US Congress in 1996 and it states that Cuba cannot trade with anyone, it states amongst other things that the only way Cuba could be considered a democratic country will be when the United States brings in a chargé d’affaires and verifies that correct elections are held according to American style democracy. That is an absurd condescending demand that they are making. Cuba would never negotiate our sovereignty like that.

Featured image: Cuba fights against the pandemic and against the growing hostility of the United States and its interference in the country. Photo: Cubadebate