One month and one week after having broken the world record for open sky triple jumping, and winning the first Olympic gold by a Venezuelan woman with a mark of 15.67 m at Tokyo 2020, this Thursday, September 9 at 1:40 p.m. (VE) Yulimar Rojas will attempt a new leap to secure her first Diamond League Trophy. With her participation in this competition she will entertain the possibility of breaking her own records and exceeding the 16-meter mark in the grand final of the tournament in Zurich.

“I have had a sensational year, full of marks above 15 meters that have given me a consistency that I needed to achieve my goals,” Rojas said recently. She aspires to return to Venezuela on September 14 to celebrate her Olympic feat at various events between Caracas and Anzoátegui.

“It was a competition that gave me the push and the confidence to reach the final in Zurich,” said Rojas. “I believe, as I said at that time, that I can give much more, that I can jump farther than I have jumped, and that I can reach 16 meters soon, and continue to provide satisfaction to the world of athletics and to my country.”

In February of this year, Yulimar also broke the world indoor track record with a 15.43-meter leap that marked the beginning of a 2021 in which she has maintained her standing as a world leader, establishing her as the most outstanding athlete in the history of the triple jump, with only one pending task, which she is on track to complete this Thursday: her first Diamond League Trophy.

Five of the ten diamonds awarded in the women’s triple jump have been won by Colombian Catherine Ibargüen, who seized the gems consecutively in 2013, 2014, 2015 and 2016, and resumed with a triumph in 2018. 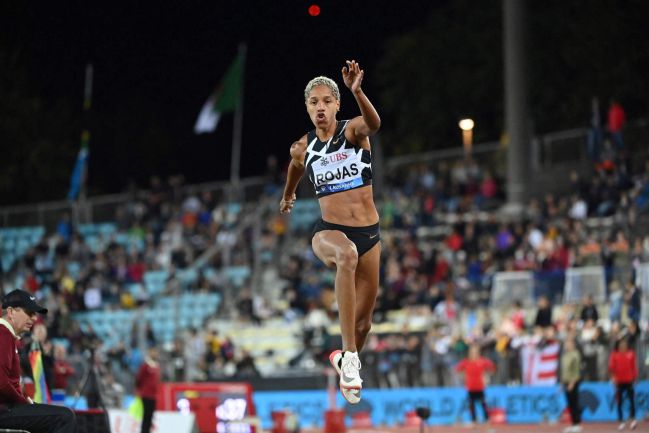 “I have wanted it very much for a long time,” said Rojas. “It is a Trophy for which I have worked hard, it means a lot to me for the value it has in the world of athletics and also, because it would also mark a new era, with my name and the name of Venezuela, of my club (Barcelona FC) and the success of my coach Iván (Pedroso).” For the four-time world champion, the Diamond is the only major award missing from her trophy cabinet.

The sky is the limit
In addition to facing the possibility of starting a new reign in the Diamond League, Yulimar Rojas aspires to even more. “The central idea was to be able to win the Olympic gold and beat the world record,” she said. “After that, the goal is to be able to jump 16 metres and be the first woman in history to do it. And that can happen here (Zurich).”

“The Olympic gold and the world record are mine and now I know that I can reach 16 meters,” added Rojas confidently.

Rivals
Patricia Mamona of Portugal, second behind Rojas on the list of this season’s best, and silver in the Olympics, will also look to finish her season in top form. They will be joined by Jamaica’s Olympic jumpers Shanieka Ricketts and Kimberly Williams, the Israeli Hanna Minenko, and Thea LaFond from Dominica.

There will be no Top 3
The controversial three-finalist format in the Diamond League will not be implemented in the 2021 Diamond League final, World Athletics announced as a prelude to the Trophy, which will have a $30,000 jackpot up for grabs, in addition to a guaranteed spot at the Oregon World Championship in 2022.

The final of the Diamond League kicks off this September 8 at the legendary Letzigrund stadium in the Swiss city of Zurich, with 25 prizes to be distributed among 23 Olympic champions, 19 world champions, and eight world record holders, including Rojas in triple jump (15.67 m) and Armand Duplantis (6.18 m) in pole vault.

The Venezuelan competition is scheduled from 1:40 p.m. (VE time), with live transmission through the Diamond League YouTube channel.