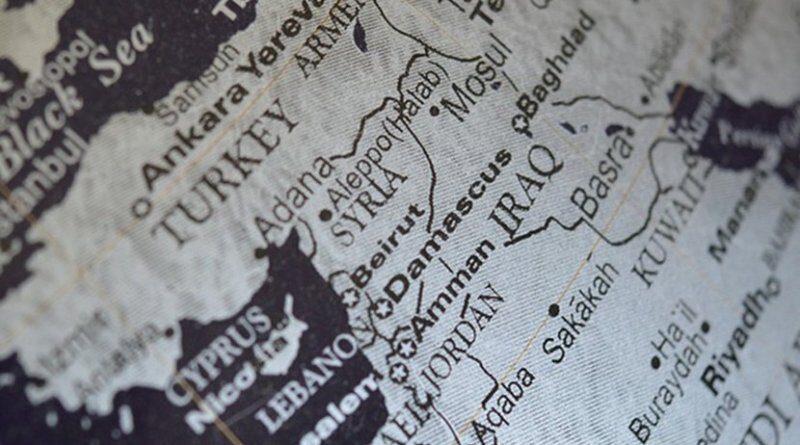 April 9, 1976. The Syrian military intervened in Lebanon to fight against the National Movement (NM) and Palestinians. Kamal Jumblatt – the leader of the NM – was too radical for the liking of Damascus. With his anti-Zionist leanings, he could easily provoke Israel into invading Lebanon – increasing the strategic vulnerability of Syria. Thus, Hafez al-Assad – with the tacit consent of the US – proceeded to thwart any possibility of a leftist regime coming to power in Beirut. Tokenistic elections are held on May 16, 1976 under the watch of Syrian troops. Assad’s favored candidate – Ilyas Sarkis – is made the president.

As was expected, heavy fighting erupted between Syrian invaders and the Palestine-NM forces. Israeli Prime Minister Yitzhak Rabin cynically observes: “Syria is currently in a state of war with al-Fatah. Its forces killed last week in Lebanon more al-Fatah elements than the Israeli army has killed in the last two years.” On October 16, 1976, the six-nation Riyadh Summit was convened to put an end to the killings. Instead of demanding the withdrawal of the Syrian troops, the conference legitimized their military presence in Lebanon by making them a part of the peace-keeping Arab Deterrent Force (ADF).

A year later, the balance of forces changed in Lebanon as Israel launched Operation Litani in March 1978 to expand its control beyond the three Christian enclaves it already controlled through proxies like Major Sa’ad Haddad and Bashir Jumayil. Israel and Syria came head-to-head with the former shooting down Syrian helicopters carrying supply to their troops. This prompted the Syrians to deploy SAM-6 missiles in prepared dugouts. Sensing the power shifts, Sarkis drifted away from Damascus, protesting Syria’s bombardment by offering his resignation, knowing Assad had no alternative to him. USA finally stepped in to defuse the crisis, sending Philip Habib to mediate. A ceasefire was agreed upon in July 1981.

Barely ten months after the ceasefire, on June 6, 1982, Israel – under the watch of USA – launched a massive land, sea and air invasion of Lebanon code-named “Operation Peace for Galilee”. Ostensibly aimed at destroying Palestinian infrastructure, the attack dealt a humiliating defeat to the Syrian army. The Lebanese parliament – encircled by Israeli guns – was called on August 23 of the same year to elect a new President. Israel’s own man – Jumayil – swiftly climbed the stairs of presidency. When Jumayil was assassinated on September 14, his elder brother, Amin Jumayil, was made the President. Meanwhile, Assad was busy mending his relations with the NM and Palestinians as the Egyptian President Anwar Sadat went to Jerusalem (November 1977) and on to Camp David (September 1978).

Assad soon began arranging his pieces on the Lebanese chess board to score gains in the wider geo-political game against Israel. The parties of the NM and the Palestinian organizations in addition to the Amal movement under Nabih Birri, Rashid Karami and the leader of Zgharta, Suleiman Franjiyeh, rallied to Damascus to launch a counter-offensive under the banner of the National Salvation Front (NSF). This was founded on July 23, 1983 to re-establish the equilibrium disrupted by the Israeli invasion. A year later, Assad invited Amin to national reconciliation talks in Geneva, Switzerland. This ended in failure. However, Assad held many trump cards, prominent among which were military pressure on the Presidential Palace exerted by his allied Lebanese and Palestinian militias, keeping Amin in check, and the formidable range of kidnappings and executions manipulated by Hezbollah commandos.

On December 28, 1985, a tripartite agreement was signed in Damascus by the three leading militia chieftains, Walid Jumblatt – the son of Kamal Jumblatt, assassinated in March 1974 – Birri and Elie Hubayqa. Hubayqa had taken over the leadership of the Lebanese Forces (LF) – originally created by Jumayil – on September 9, 1985, in association with Samir Geagea, the northern militia leader who was named commander-in-chief of the LF. Hubayqa – who completed the break with Amin and the Phalange – had tried to wash his hands of the Sabra and Shatila massacres and executed an about-face, in the direction of Damascus where he was embraced and his public image restored.

This break signaled the first division inside the Christian camp, which had hitherto been united, at least vis-à-vis Syria. The signatories to the accord pledged to end the war and dissolve all of the militias within one year. Amin opposed the accord, despite the attempts to convince him to the contrary during his many meetings with Assad; the final session, which marked the break between the two, was on January 13-14, 1986. Thereafter, Amin resorted to parliament to oppose the Tripartite Accord, while on March 12, 1986 he and Geagea engineered an armed coup that ousted Hubayqa from the mini-state of Marounistan. The Tripartite Accord thus met its end, to be resurrected after some years as the basis for the Taif accords.
RELATED CONTENT: Tightening the Noose Around Syria

In 1988, when Amin’s six-year term expired, the Lebanese parliament – or its 73 surviving members, out of an original 99 – and the outside powers which traditionally influenced its choice, could not agree on his successor. The official state authorities fell apart. For the first time since the war began, there were now two governments. The army commander, General Michel Aoun, appointed by the outgoing president as “prime minister” of a provisional military council, moved into the presidential palace at Baabda, in East Beirut. He was not, of course, the president, but, in the eyes of a large and fervent following, overwhelmingly Christian but including a fair number of Muslims too, he effectively had the popular mandate to be one; and he withheld recognition from the two candidates – the first having been assassinated – whom parliament eventually did elect. In West Beirut, a rival administration, headed by the existing prime minister, Salim al-Hoss, continued to function, and appointed a rival army commander.

Aoun’s command did not run very far – not even, in fact, inside that 20% of Lebanese territory that fell within Marounistan. There the LF militia, spearheaded by Geagea, held sway. It led an uneasy co-existence with the army. They did manage to cooperate when, from time to time, the Maronite territory came under Syrian attack. But their aims were different. Geagea and his militia were narrowly sectarian, and considered Marounistan an unsurpassable horizon. Aoun – a staunch Maronite, but a Lebanese nationalist too – wanted to use the army to establish a united Lebanon. For that the Syrians and the Israelis had to go; and in 1989 he began a “war of liberation” against the former.

It was a hapless enterprise, whose central characteristic was six more months of cross-city artillery duels, perhaps the heaviest Beirut had ever seen. The military campaign was interspersed with the far bloodier, full-scale war he also had to wage to wrest control of Marounistan from the LF. About 20% of his troops were Muslim, but essentially this was an intra-Christian contest. Its combatants were some 16,000 men of Aoun’s army, with most of the tanks and heavy artillery America had supplied during its brief, disastrous presence in the country, pitted against the 10,000 men of the oldest, largest, well-organized, Israeli-assisted militia, with an artillery strength not significantly weaker than its adversary’s. For Damascus, Aoun was a new Bashir Jumayil. He was unpredictable and had a cross-sectarian credibility that Jumayil had lacked. Even worse, there was Saddam Hussein’s intrusion. The Iraqi dictator wanted to punish his Syrian rival for backing Iran in the Iran-Iraq war from 1980 to 1988. Saddam shipped heavy weaponry to both Aoun’s brigades from August 1988.

In return for partnering with an American-led coalition against Hussein’s invasion of Kuwait, Assad won carte blanche to re-jig the Lebanese plates according to his desires. At dawn on October 13, 1990, Syrian bombers struck the presidential palace; the Americans had secured a waiver of the Israelis’ prohibition on any Syrian intrusion into Lebanese airspace – a right which, since 1976, they had reserved exclusively for themselves. Syrian military and infantry then invaded the Maronite heartland.

In October 1989, with the help of the US, and Saudi Arabia, the Arab League managed to assemble 58 of the country’s deputies in Taif, a Saudi mountain resort, where, after three weeks of hospitality, they approved a Charter of National Reconciliation. This was the final version of earlier, abortive proposals for amending those two founding texts of the sectarian state, the verbal National Pact and the 1926 constitution itself. Like all of them, it aimed at a fairer balance of power between the different communities in Lebanon, premised mainly on a reduction in the Maronites’ supremacy.

On the question of Lebanon’s basic identity, it anchored the country more firmly in its Arab environment, with the formulation “Arab in character” of the National Pact being replaced by the new “Arab in belonging”; but at the same time, it stressed that Lebanon was the “final homeland for all its citizens” – implying that it would never be subject to incorporation into some larger Arab entity. Like the original constitution, it did postulate the abolition of political sectarianism as a final goal, but in the meantime, with its formal endorsement of modifications in existing practice, it effectively reinforced it for the foreseeable future.

Under these modifications, the presidency continued to be reserved for a Maronite, the premiership for a Sunni and the speakership of parliament for a Shiite. But the powers of the first were curtailed in favour of the prime minister and his cabinet, the speaker and his assembly. And in place of the existing 6:5 ratio in favour of the Christians, parliamentary seats were to be shared equally between them and the Muslims. One of the immediately operational provision of the Taif also called for the “dissolution of all Lebanese and non-Lebanese militias”.

As is evident from a brief look at the Lebanese civil war, Syria played a regressive role by using the conflict’s dynamics for its own benefits. In 1976, at the outset of the civil war, USA had given the green light for Syria’s original military foray into Lebanon, at the Palestinians’ expense; in 1983, deeming it a Soviet-backed, “radical” Arab state, it had sought to expel it; now, in another turn-about, it saw it once again as a stabilizer of its turbulent, small neighbor. Instead of pursuing a clear-headed, anti-imperialist policy, Assad’s Syria used its own clout to undermine a strong, regional agenda against the Global North.