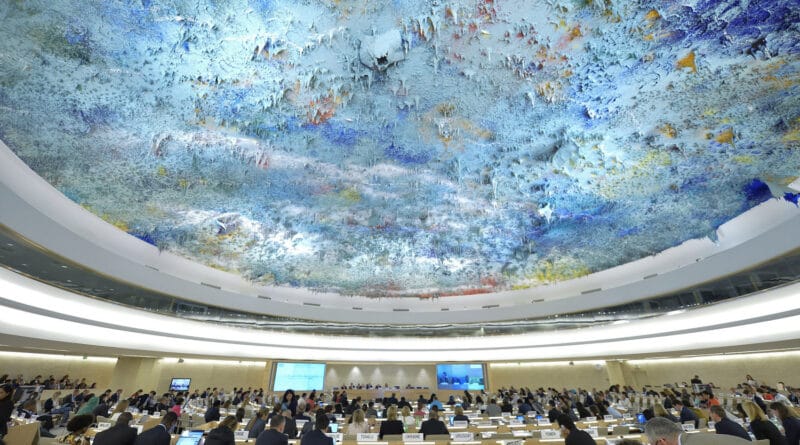 Argentina Votes at the UN against Venezuela: Not in our name!

In an openly complacent attitude towards US foreign policy, the Argentine government, through its official representative, voted against the Bolivarian Republic of Venezuela in the UN Human Rights Council. Repeating an erratic behavior that has very close antecedents, the Ministry of Foreign Affairs presided by Minister Felipe Solá, under the strict instructions of President Alberto Fernández, agreed and fully supported a fallacious, deceitful and interfering report prepared by Michelle Bachelet.

The question that Argentines must ask themselves is: what is the government of the Frente de Todos supporting with its vote? It is very easy to realize this, reading the series of barbarities expressed by Bachelet in a text loaded with hatred against a country that is ravaged by the empire every day of the year. She speaks of “extermination battalions,” “torture,” “assassinations,” “arbitrary detentions,” “rapes,” and she mixes it up with the crisis that the population is experiencing as a result of the sabotage by the right-wing opposition and fascists, or as a result of the permanent blockade, and in this way she struts around giving critical opinions about “power cuts,” “fuel shortages,” and “lack of water for 90% of the population”. The whole “story” pursues a single objective and that is to challenge the revolutionary process and to contribute, by order of Washington, to the destruction of a sovereign government, which, together with Cuba, are examples in the continent in the face of the current humanitarian contingencies that the world is experiencing.

Bachelet, like that puppet Luis Almagro, plays a disciplined game for the side of the bar and the stars. Now, with that vote given behind the backs of what millions of Argentines may think, the Fernández-Fernández government has crossed a line. Voting like Bolsonaro and Piñera should at least make one reflect on what is happening.

On the one hand, it is worth clarifying that Bachelet wrote this document without having set foot in Venezuela, and that it responds to an elaboration made from Panama by an entity designated by the Chilean official called the Fact Finding Mission, based on information gathered through social networks and internet pages, which undermines all credibility to its results. In fact, they acted as a private consultant that in addition to listening to the infamies poured out by the opposition to Chavismo, collected so much false data that the UN career officials themselves had to warn them that they must be corrected.

The final text is a true “copy and paste”, not precisely about the Venezuelan situation regarding Human Rights, but it can be applied perfectly to what happens daily in Colombia, Peru, Paraguay, Brazil or even Chile, where Bachelet governed with an iron hand and implemented against the Mapuche people many of the harassments that she now charges the Caribbean country with. Sanctions and reprimands from the OAS and the UN will never fall on all those countries with right-wing governments. They are good vassals of the master of the north.

Hence, the lightness and severe ideological deviation into which the Argentine government has fallen, which in its own name has embarked the country on erroneous and dangerous positions, is outrageous. It is necessary to say “Government” because it is no longer valid to say “Foreign Affairs” when it is well known that no Foreign Minister can have his own way in such delicate matters. And if he does, entering into contradiction with the official discourse, the most logical thing is for that official to be removed from office.

We must say “Government”, because it is President Fernandez himself who, as reported in the official statement from the San Martin Palace, gave the instructions to support “with strength the work done by the United Nations High Commissioner Michelle Bachelet”. He went even further, warning the Bolivarian government that it must implement the recommendations of that report, bringing the alleged human rights violators to justice. If this is not interference, what should it be called?

Unfortunately, one cannot remain silent in the face of such assertions. They do not represent the thought and attitude of solidarity that many Argentines (many of whom will have voted for AF) feel towards Venezuela and its legitimate President Nicolás Maduro. An attitude that is born of the understanding that the Great Homeland is one and that in that framework, the Bolivarian Revolution accompanied Argentina in very hard circumstances, when the country was also suffering from the destabilizing maneuvers of the oligarchy and imperialism. For that reason, this improper vote signifies a new concession before the Empire, in the same way that it made it before the IMF with regard to the foreign debt or to Zionism, presenting it with resolutions such as those carried out by the Foreign Ministry with regard to the definition of anti-Semitism, or the undertaking of a new war.