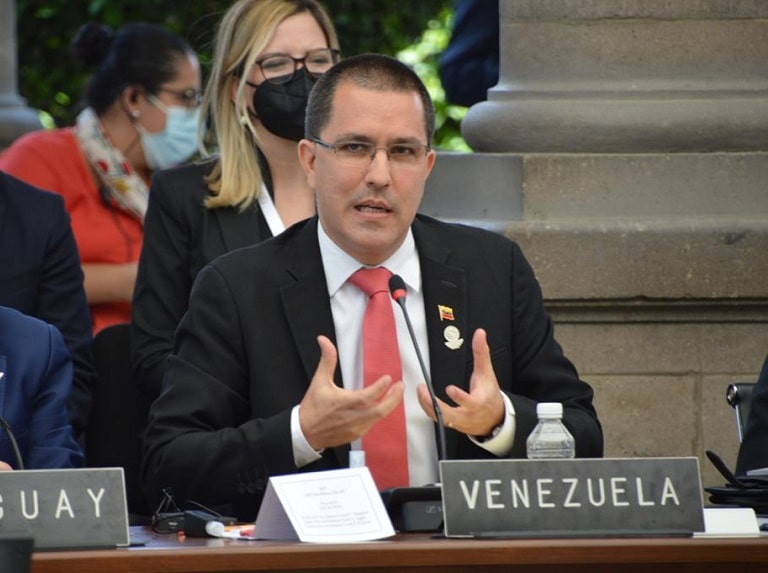 Jorge Arreaza the Venezuelan Chancellor during his speech at the CELAC summit. Photo courtesy of MPPRE.

Venezuelan Foreign Affairs Minister, Jorge Arreaza, congratulated Mexico’s work as a fundamental part in the functioning of the Community of Latin American and Caribbean States (CELAC).

During his speech, Arreaza pointed out that this country has played an important role in creating a space for dialogue. Meanwhile it has prevented CELAC from becoming a hub for the interests of right-wing Latino governments, as happened to the Union of South American Nations (UNASUR), explained news agency AVN.

He also reiterated a message from President Nicolás Maduro to sustain the work that Mexico has been doing within the organization, with the intention that the next pro tempore Presidency of CELAC also continues this work.

Below is the full unofficial translation of Minister Arreaza’s speech:

Thank you very much brother minister for this meeting.

I really feel moved, overwhelmed, in the best sense of the word, by the tributes to the Liberator Simón Bolívar and for being here, precisely, on his anniversary.

In fact, I would like to start with a quote from the Liberator from the letter that he sent to the heads of state to convene the Amphictyonic Congress of Panama which, without a doubt, is the great precursor of our Community of Latin American and Caribbean States.

He told them that: “I have written to you so that we could form a confederation of the heads of each State to meet in the Isthmus of Panama…” This is the point I want to emphasize: “it would serve us as a place for advice in great conflicts, as a point of contact facing common dangers, as a faithful interpreter in public treaties when difficulties occur, and finally, as a place to reconcile our differences.”

Look at how the Liberator proposed our unity 200 years ago, the great conflicts, the common dangers: the pandemic, drug trafficking, violence and reconciliation in the face of our differences as well as the interpretation of treaties. That is the multilateralism and the joint action of our region.

This was written by the Liberator on December 7, 1824. Two days later was the Battle of Ayacucho in Peru, a decisive Bolivarian victory. The Liberator was not in charge—the Congress of Colombia called him, and although everyone suggested that he not do so, he returned to Lima in a disciplined way. He left the great Antonio José de Sucre and José María Córdoba in command, and the Liberator carried out the battle as planned.

In 1826, the Congress of Panama was able to meet. It was not easy, even some delegates had a hard time getting to Panama. In some cases, they died on the way to Panama. However, they met, and there they discussed, once again, a great treaty of union, a confederation, and a perpetual alliance between our countries.

Unfortunately, the course of history did not favor the Liberator’s project. Right here, they met again, in Tacubaya, Mexico City, and the effort to reach consensus was almost useless. But there, the Liberator left a well-marked path to follow. We believe, without a doubt, that it must be followed.

This morning, President Andrés Manuel López Obrador’s message for us was a doctrine, and we believe that CELAC should assume it in its founding documents and truly apply it. President Andrés Manuel López Obrador was clear in the validity of Simón Bolívar’s thinking 200 years later; and it is here in CELAC where that validity is expressed in the most lively, most heartfelt, and most pertinent way.

Furthermore, reference was also made to the citizenship of the Liberator. The Liberator was born in Venezuela, for that we are grateful… but in reality, the Liberator stopped being Venezuelan alone, in his life. He became a citizen of our America, to the point that his was the precursor of a common citizenship that should exist among our countries and that will exist in the future. When the second Constituent Congress of Mexico granted Mexican citizenship to the Liberator, which was also proposed by that rebellious priest of Servando Teresa de Nieves, he said it was the best homage that could be made in his name. He remains present there.

We believe that Mexico has done a great job. In these difficult years of the pandemic, we believe that Mexico has served not only as a mediator, but it has managed to prevent CELAC from meeting the fate that UNASUR did. For us, it is important that it remains, that it stands with its head held high, that it interacts with the great powers in the world, and that it achieves concrete results in specific areas. Also, President Nicolás Maduro has told us “let’s take care of what Mexico has done,” so the next pro tempore presidency may continue it. Moreover, after so many reflections, we are no longer philosophers—we must take action, and we must also re-politicize CELAC.

As our Liberator said, it is there even to reconcile our differences. It was born as a forum for dialogue and political agreement, and here there can be no taboos or unaddressed issues. We must move forward very seriously.

This morning, President López Obrador even raised the historical dilemma of Bolivarianism and Monroeism. There is the OAS, and there is CELAC. I remembered Commander Chávez and President Rafael Correa, who told us, during the formation of CELAC, for example, that the Summit of the Americas should be the meeting point between the Community of Latin American States and the Caribbean, CELAC, with the two giants of the North. To get where? To these agreements, to this virtuous cooperation of the entire continent, of which President Andrés Manuel López Obrador spoke to us this morning. The Liberator Simón Bolívar also said to be anti-hegemonist, but there is also a balance in the universe.

Quite simply, in closing, we want to express our solidarity with the people of Haiti because we are deeply saddened by Haiti and the brutal assassination of President Jovenel Moïse. We express our solidarity with Cuba as revolutionary, socialist, and sovereign, along with Nicaragua, and all the countries that suffer difficulties. We have all suffered them throughout all these months of the pandemic. As always, we recognize the sovereignty of Argentina over the Malvinas archipelago, and the necessary decolonization of Puerto Rico.

I close with the following: yesterday we met with Alicia Bárcena. How good it was to see Alicia, ECLAC and FAO here chairing this CELAC summit? Because we must achieve self-sufficiency in all areas: in health, in food, and in energy. Venezuela once again makes its natural resources available.

We are going to revive Petrocaribe, despite the sanctions, despite the blockade. It will come back to life this year and, of course, the great project of Petrosur and other countries. We have the potential, minister, to be self-sufficient in the most fundamental needs of our people.

From Venezuela, receive our affection and hopefully we can see our presidents, prime ministers, and leaders gathered in this beautiful city on September 18.

Thank you very much!

Featured image: Jorge Arreaza the Venezuelan Chancellor during his speech at the CELAC summit. Photo courtesy of MPPRE.