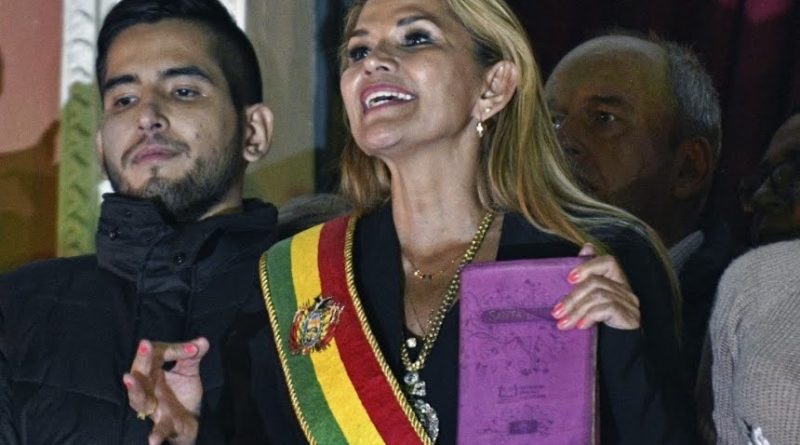 Last Wednesday, the coup government of Bolivia launched a massive military operation claiming to be a pre-emptive strike against the expected violence to occur this Wednesday during Plurinational State Foundation Day celebrations that memorializes the change in the name of the country and the adoption of a new constitution in 2009 under the Presidency of Evo Morales. Heavily armed military personnel on the streets, arrest warrants and the denouncements of deputies who are intimidated by violent groups has just continued under the U.S.-backed coup government in La Paz.

The increased militarization has occurred despite violence, vandalism and looting decreasing since November when Morales was driven out of Bolivia. However, the fear continues and justice has been politicized to such a degree that the coup government has itself reported that there are more than 64,000 judicial proceedings in progress against former authorities and officials associated with Morales’ administration – all leading up to the elections on May 3.

However, the dilemma for the putschists is a fear that Morales’ Movement to Socialism (MAS) Party may win. Morales has refused to legitimize the current leader of Bolivia, Jeanine Añez, further complicating the upcoming elections. It is for this reason, with the huge popularity of Morales remaining, that the coup government fears what might occur on Wednesday, which is not only a Morales-era public holiday, but also the date on which the constitutional mandate of the Executive and Legislative powers ends. Even if the parliament decides to ratify the extension of the mandate by the Constitutional Court, the frustrations of the people might explode.

This comes as the Bolivian people were reinvigorated with Morales stating “If between now and in a little while… I were to return [to Bolivia] or someone else goes back, we must organize as in Venezuela, armed militias of the people,” referring to Bolivarian people’s militias organized by Venezuelan President Nicolás Maduro. However, this could be a dangerous statement that could serve to justify further repression and the militarization of Bolivia.
Evo Morales then went to Twitter to say

“Peace, reconciliation and unity in Bolivia they will only be achieved by restoring the rule of law, eliminating motorcycle groups and fighting, ultimately, against inequality, discrimination and poverty.”

It is this very symbol of Bolivian sovereignty and independence that Añez has prioritized the removal of statues and images of Morales from the public sphere. However, it is very unlikely that this would be enough to remove the memory of Morales that Bolivians have for the country’s first indigenous president. Bolivians people know the removal of references to Morales publicly will not erase his achievements from their memory.

With Bolivia being mired by a political crisis for months that still has no solution, the next few days before the anniversary of the founding of the Plurinational State on January 22 has put the government on top military alert, which now realizes that it cannot erase a country’s history at a stroke or deny its identity. However, Añez has decided to silence those voices and as she cannot dissuade them by deploying the army and police to the streets.

The little widespread popularity that the coup government has will continue to decline, especially after the visit of Special Assistant to the President and Senior Director of the United States National Security Council’s Western Hemisphere Affairs directorate, Mauricio Claver-Carone, to Bolivia who reiterated his support for Añez on behalf of Trump. Claver-Carone and Añez talked about Trump’s priorities in this so-called transitional period. In the regional domain scheme, Trump cannot let the Andean country escape from his hands, which is why it is likely that he pushed Añez to rename the anti-imperialist school that Morales created in the Armed Forces of Bolivia in 2016, which was renamed on Friday to Heroes of Ñancahuazu – after the Bolivian military unit that killed revolutionary figure Ernesto “Che” Guevara in 1967, according to TeleSUR. This was of course part of a wider effort to destroy the memory of Morales in Bolivia.

The arrival of Áñez to power, by a coup d’etat in November, gave a twist to Bolivia’s international policy, which during the almost 14 years of Morales’ administration had assumed an “anti-imperialist” position, including the expulsion of the U.S. ambassador and the U.S. anti-drug (DEA) and cooperation (USAID) agencies. Claver-Carome visit certainly improved several steps of rapprochement between La Paz and Washington after the fall of Morales in November.

Although Claver-Carome said that his visit sought to deepen the links between the two countries, of which he said they had the same democratic interests and values, the attempts to destroy the memory of Morales is likely to backfire and create a renewed vigor for support behind the MAS. It is for this reason that Áñez must consider scaling down the violence and persecution against Morales’ supporters, especially as Wednesday will be a highly charged and emotive day, in which Morales supporters view the resistance to her putschist government as part of an anti-imperialist struggle.

Paul Antonopoulos is a Research Fellow at the Center for Syncretic Studies.