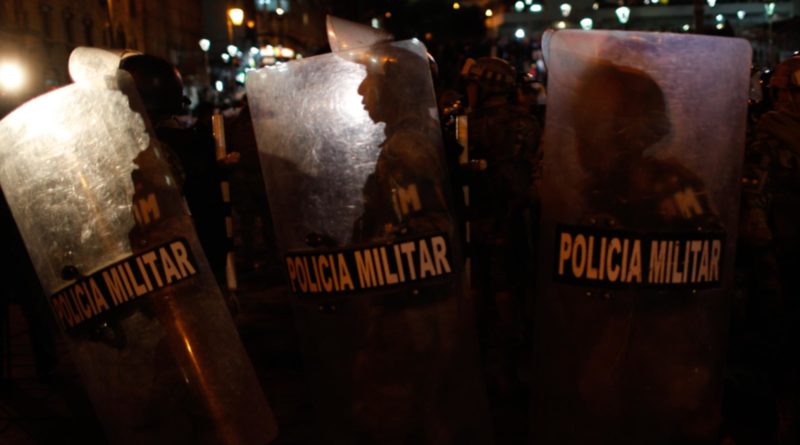 Interim President of Bolivia Jeanine Añez has ordered troops to the streets and forced opposition candidates to organize abroad for fear of arrest ahead of the country’s first elections since a US-backed coup last November.

Wednesday, January 22 marks the day that Jeanine Añez is set to stand down as “interim” President of Bolivia, beginning the process for fresh elections set for May 3. Añez came to power in November, following a U.S.-backed coup that deposed the Movement to Socialism’s (MAS) Evo Morales. However, she is certainly not acting as if she intends to relinquish her power, let alone move towards new elections. Instead, she has sent the military, replete with tanks and other armored fighting vehicles, into the capital cities of all nine departments of the country.

8pm: The Bolivian military is riding about central La Paz with their guns out and sirens on. They're not going to an incident, the objective is to intimidate the population. pic.twitter.com/Fjpt6pmuNV

MintPress News’ Ollie Vargas was on the scene in the center of the capital La Paz, where he filmed hundreds of armed soldiers performing drills outside the Cathedral of St. Francis and dozens of military vehicles circling the city, sirens on and guns drawn.

“The purpose of that is to intimidate people ahead of possible protests against the coup on the 22nd of January…This was a show of force saying you are not going to be able to march what you want. The military is preparing for a war-style operations if marches do arrive in the city. It is about intimidating the people,” he said in an interview with TeleSUR English; “The point was to be a show of force, rather than itself be an act of repression. It was there to show what repression could come.”

Huge mobilization of the Bolivian military in the center of La Paz, outside San Francisco cathedral.

In six days, social movements will be protesting here against the coup. pic.twitter.com/CxUqdV44rv

The military played a leading role in the November coup, demanding Morales resign and handpicking Añez as his successor. The police, too, were crucial, rebelling against Morales and later repressing protests from the country’s indigenous majority, even conducting massacres in the towns of Sacaba and Senkata. “It seems like the police is following the instructions of the far-right in Bolivia,” said United Nations Special Rapporteur Alfred de Zayas. Last week, Añez rubberstamped a pay rise for the country’s police, bringing their salaries up to that of the military’s.

For an interim government, the Añez administration has certainly made some sweeping policy changes, both at home and abroad. Internally, it has begun a mass privatization program aimed at conducting a fire sale of the country’s considerable natural resources. Since November it has been at war with the press, launching a crackdown on all media hostile to it, closing down multiple TV stations, with critical journalists disappearing or being found dead in suspicious circumstances. It has also set up new SWAT-like secret police battalions aimed at suppressing what is calls subversive voices, both domestic and foreign.

Añez has completely reoriented the country’s foreign policy, pulling out of multiple international and intercontinental organizations, expelling thousands of foreign nationals, recognizing Israel and inviting the Israeli Defense Forces to train the Bolivian security services and closing its own anti-imperialist military school.

It has also moved far closer to the United States than previously, recognizing U.S.-backed figure Juan Guaidó as the legitimate head of state of Venezuela. Earlier this month, a team from the U.S.-funded group USAID arrived in the country to advise the government on how to best conduct the upcoming election. Given the U.S.’ history in overthrowing heads of state across Latin America, the news has not been greeted with pleasure by all. Thus, while many inside the country have voiced their concern over the suspension of democracy, no one is accusing the new government of being lazy or unambitious.

The official candidates for Bolivia's Movement Towards Socialism:

MAS candidates forced to organize abroad
Under very difficult circumstances, the MAS party yesterday announced that its candidates for the May elections will be a ticket of Luis Arce Catacora for president and David Choquehuanca for vice-president. MAS leaders met in neighboring Argentina due to the repression in their own country. The location meant that a number of key figures accused of crimes by the new administration, including up-and-coming star Andrónico Rodríguez, could not attend. Arce, 58, Western-educated and middle-class, was Minister of Finance under Morales in an era when Bolivia generated high and sustained economic growth. Many see him as far from radical. His running mate is David Choquehuanca, an indigenous activist from a peasant background. He was Morales’ longtime Foreign Minister and was also secretary of ALBA, an intercontinental organization Añez has recently pulled the country out of. He is commonly seen as the driving force behind Bolivia’s anti-imperialist foreign policy, currently being dismantled by the coup government. Some will be disappointed that Andrónico Rodríguez, a charismatic indigenous 30-year-old union organizer groomed by Morales for a leadership position, was not chosen.

Whether those candidates will, until May, be able to remain in their positions – or even out of prison – is an open question. Many MAS officials, including President Morales and Vice-President Alvaro Garcia Linera, have been forced to flee the country or face arrest. Another MAS leader, Walter Ferrufino was arrested this weekend as he was traveling to Argentina for the meeting.

In the October election, Morales and the MAS gained 47 percent of the vote in the first round, enough to secure an overall victory. In contrast, Añez’s party, the Democrat Social Movement, received four percent. While all sides continue to behave as if a vote will take place in May, the absurdity of holding an election under the circumstances of a military takeover, where by far the most popular party is being repressed, means that there is a very real possibility the proceedings end up lacking credibility.