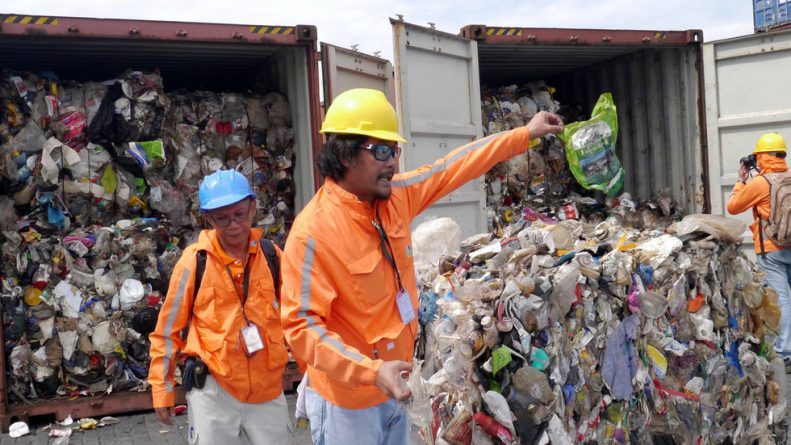 The Philippines started returning dozens of shipping containers full of garbage to Canada on Friday. The move could possibly end a six-year dispute between the two countries.

Sixty-nine containers holding some 2,500 tons of household waste (including plastic bottles, bags, newspapers and diapers) were loaded overnight onto a vessel at the port of Subic, northwest of Manila. The containers left on Friday for a month-long journey to the Canadian city of Vancouver.

“Baaaaaaaaa bye, as we say it… The garbage is gone, good riddance,” Philippines Foreign Secretary Teodoro Locsin wrote on Twitter, posting images of the leaving vessel.

Three years ago a Philippines court declared the import of 2,400 tons of Canadian waste illegal. It had been mislabeled as plastics for recycling. Philippines President Rodrigo Duterte then ordered that the waste be shipped back, threatening to dump it in front of Canada’s embassy in Manila, or personally sail with the waste and leave it in Canadian waters. “Let’s fight Canada. I will declare war against them,” he said.

Ottawa explained that the waste, exported to the Philippines between 2013 and 2014, was a private commercial transaction done without the government’s consent.

I’m crying. I’m gonna miss it so. Never mind. Another Filipino will find a way to import another batch. Boohoohoo. pic.twitter.com/RkdmhHPSdC

The country took the responsibility of shipping trash back, but failed to meet the deadline. The Philippines then recalled its envoys in Ottawa.

“The government of Canada is taking all the necessary measures to ensure safe and environmentally sound transport, handling and disposal of the waste in Canada,” Mark Johnson, spokesman for Canada’s environment and climate change ministry, told Reuters.

President Duterte’s spokesman Salvador Panelo said he hoped ties with Canada would now return to normal. Philippines Foreign Secretary Teodoro Locsin said diplomats whom he had ordered to leave Canada had now been told to return.

“Get your flights back. Thanks, and sorry for the trouble you went through to drive home a point … This is the end of the matter … There’s more to garbage between us,” Locsin tweeted.

Earlier this year, the Philippines shipped back 6,500 tons of garbage to South Korea, misdeclared as plastic flakes.

The row between developing and developed nations over garbage imports has intensified over recent years. The latter are being forced to rely mostly on themselves in their future waste treatment.

China which had for years received the bulk of scrap plastic from around the world closed its doors to foreign refuse in 2018. Huge quantities of waste plastic have since been redirected to Southeast Asia, including Malaysia, Indonesia and, to a lesser degree, the Philippines. Washington rushed to blame Beijing while urging it to reconsider its “catastrophic” ban on foreign garbage imports.

The situation got worse when India – another major waste importer – followed China’s example and banned the import of solid plastic waste as well.

Malaysia, the world’s main destination for plastic waste after China, said on Tuesday it would return as much as 3,000 tons of waste back to the countries of origin, including Australia, Bangladesh, Canada, China, Japan, Saudi Arabia and the United States.

According to statistics from the Worldwide Fund for Nature, around 300 million tons of plastic are produced every year. Much of it is ending up in landfills or polluting the seas, in what has become a growing international crisis.