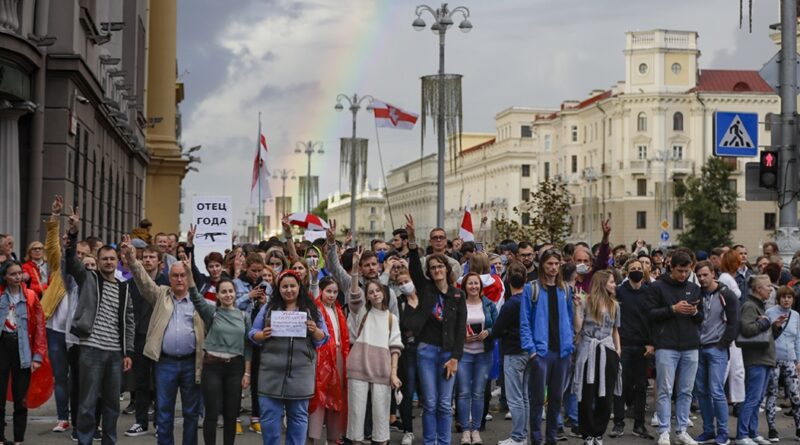 August 30, 2020.- COMMUNISTS in Belarus have called for international support and solidarity to stop a “bloody coup” to remove President Alexander Lukashenko from power.

The Communist Party of Belarus (CPB) warned of serious consequences if plans being pressed by the US, EU and their Nato allies are successful, drawing comparisons to the so-called “colour revolutions” seen in Ukraine and Georgia.

“We saw what their intervention would result in: in the lynching of communists, the destruction of monuments to Lenin and other Soviet leaders, the prohibition of our symbols, the praise of Hitler’s henchmen. And most importantly, into a disaster for the working people,” a party statement said.

The party’s appeal contrasts with calls from the IndustriALL global union for solidarity action with Belarusian protesters.

It called for protests at Belarusian embassies and warned that leaders of anti-government strikes were being arrested.

Mr Lukashenko has come under pressure to resign following August 9’s election, which he officially won with 80 per cent of the vote.

Opponents have cried foul, accusing him of rigging the vote and saying exit polls suggested a different outcome.

Mass demonstrations opposing Mr Lukashenko have taken place in Minsk and other cities and workers in many key industries, including Belarus’s potash fertiliser sector that is a major source of foreign revenue, have gone on strike demanding his departure.

The EU ratcheted up the pressure today by announcing targeted sanctions on 20 officials suspected of election fraud.

“We have general agreement on how the list will be structured and who will be, more or less, on the list,” said Czech Republic Foreign Minister Tomas Petricek.

The CPB said that Mr Lukashenko was being targeted because he has refused to open up the country to the private sector, with the EU and others eyeing-up Belarusian resources and industry.

“Under his leadership, through the efforts of millions of Belarusians, the main achievements of Soviet socialism were preserved: the anti-imperialist foreign policy, the right to work and a dignified old age, protection of the family, motherhood and childhood, free medicine and affordable education,” the party insisted.

The party said that Belarus is not ruled by the dollar, has no financial and industrial oligarchy and no criminal clans and this “arouses furious anger and hatred among reactionaries all over the world.”

It warned that the success of the “counter-revolution ends with only one thing: a firing wall of the communards at the Parisian cemetery of Pere Lachaise.

“We in this difficult moment appeal to all communist and workers’ parties of the world… to provide all-round assistance to us,” the party urged.