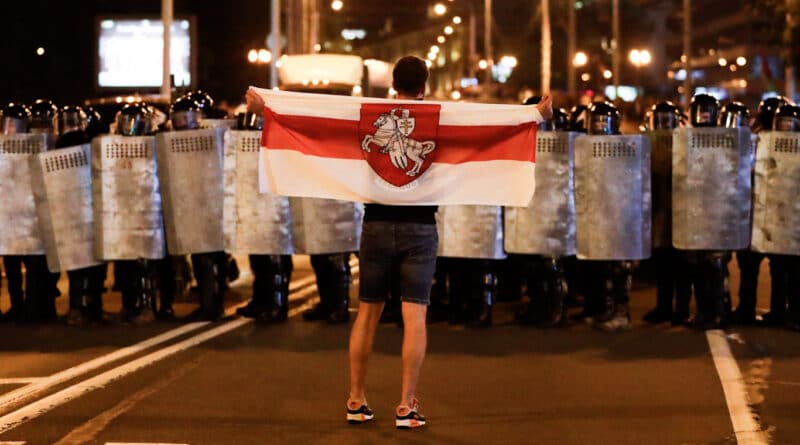 Belarus shows that any small state with a mildly socialist system and independent foreign policy invites subversion by the Yankee hegemon and its collaborators.

A “color revolution” is a media term for a movement based on legitimate grievances only to be co-opted into a regime change operation backed by the US and confederates. There have been so many – Georgia in 2003, Ukraine in 2004, Kyrgyzstan in 2005 – that they have run out of colors. Belarus is amidst the “slipper” color revolution.

Belarus, a former constituent republic of the USSR, declared its sovereignty in 1990 with the dissolution of the Soviet Union. Under its new and now contested President Alexander Lukashenko, first elected in 1994, Belarus rejected the western-imposed “economic shock therapy” that looted the public wealth of many of the other former Soviet republics.

Earning the sobriquet of the “last Soviet republic,” Belarus retained state-run industry and agriculture, the social safety net, and the relative equality of the socialist period. Along with that came the enduring Cold War enmity of the US and its NATO epigones.

In contrast, the newly “liberated” Russian Federation, with its US-installed leader Boris Yeltsin and its cabal of nouveau riche oligarchs, was plundered by western capital. (Note: The Slavs have “oligarchs,” while the US has “philanthropists” like Turner, Gates, and Soros.) Its standard of living, social services, and life expectancy went into freefall. Initially, Belarus was more prosperous than Russia, but as the Belarusian economy slowed in the early 2000s, the Russian economy surged with the ascendance of Vladimir Putin.

The sprawling US embassy in Belarus occupies an area the size of a city block. Clearly, the Yanks do more than just issue visas. The US is preoccupied with regime change. In 2004, the US passed the Belarus Democracy Act overtly funding anti-government NGOs in Belarus and prohibiting loans.

The tribulations of triangulation

The official languages of Belarus are Belarusian and Russian. Some 80% of the population is ethnic Belarusian followed by Russian. In 2000, Belarus and Russia established the Union State, a supranational confederation for economic integration and common defense. Though the two sovereigns declared the goal of a single entity, efforts at implementation have variously been stalled by Lukashenko.

Russia sells oil and natural gas to Belarus at discounted rates. Belarus permits Russia to have a missile defense system on its territory, which is considered a critical deterrent against a NATO nuclear first strike.

Following the US-backed coup in neighboring Ukraine in 2014, Lukashenko took a more independent, nationalist tack, reflecting the predicament of Belarus as a buffer between Russia and an increasingly aggressive NATO. Lukashenko has tried to triangulate between Russia and the West. Muammar Gaddafi chose a similarly conciliatory path, which ended badly for him and his country.

Internationally, Belarus has sided mainly with Russia in addition to upholding Palestinian rights, warm relations with Venezuela, and trade with Syria. From Washington’s perspective, these have been fatal moves for Lukashenko. But the primary motivator of US foreign policy – with Lithuania, Latvia, and Estonia joining NATO in 2004 and post-coup Ukraine likely on the way – is to complete the military occupation of Russia’s western border. Hence “Europe’s last dictator” must go.

Playing both carrot and stick, US Secretary of State Pompeo visited Belarus last February to conclude an oil deal to wean Belarus from dependence on Russian-sourced petrol. Then in April, the US and Belarus reestablished diplomatic relations.

The National Endowment for Democracy (NED), the quasi-governmental US agency which does legally what the CIA does extra-legally, currently lists projects in Belarus euphemistically described as “developing civil society,” “fostering freedom of the media,” and “fostering youth activism.” They sound so good that one might wish for the NED to import some “pro-democracy measures” back to the homeland.

In the run-up to the August 9 presidential election in Belarus, credible reports circulated of suppression of the opposition. Lukashenko won with a less than credible 80% of the vote. Still, most observers not aligned with the regime-change project believe he carried a majority.

The runner-up candidate, Sviatlana Tsikhanouskaya, received 10% of the vote. She absconded to Lithuania after the election, where she proclaimed herself the winner and ready to lead Belarus. The West now has their puppet president in exile.

Mass protests, including a showing of industrial workers, erupted calling not only for “free and fair elections,” but for total system change. A national protest strike, centered in Minsk, is in the making.

Angry young people wave the red and white flag that was flown during the Nazi occupation, as the opposition protest morphs into a force aligned with the West and against anything Russian. While the leadership of these protests is deeply anti-Russian, most of the protestors are not. But the winds of xenophobia are being fanned. An initially legitimate protest movement is being co-opted by foreign interests.

The call for “democracy” raises the question of democracy for whom and under what kind of system. A coalition of opposition groups published a program of the Belarusian opposition. Among the sponsors of the program is the USAID, the cover agency for the CIA. A nearly identical document had been promulgated in 2014 after the Ukrainian coup.

This published opposition program calls for a complete reorientation of the Belarusian state and society from east to west and the establishment of a neoliberal political economy.

Politically, Belarus would withdraw from the Union State and all other structures where Russia is prominent and join the European Union and NATO. In conjunction with the privatization of state enterprises and the creation of a thorough market economy, purchase of Belarusian enterprises by Russia would be prohibited while being opened to western corporate interests.

The situation is volatile

By just about all accounts, Lukashenko’s 26-year rule of Belarus degenerated with questionable elections, authoritarian practices, mismanagement, and corruption. Even if Lukashenko won the last election, he has lost much of his credibility with his people, certainly with the West, and even with his Russian ally.

The US involvement in Belarus is not nearly as overt as it was in the Ukraine coup and, given the circumstances, may not need to be to achieve desired outcomes. Obama’s former deputy national security advisor, Ben Rhodes, tweeted on August 11: “Americans have to recognize that the fight against Lukashenko in Belarus is our fight.”

Similarly, the UK, France, and Germany are fishing in these troubled waters along with Poland and the Baltic states. While Russia and China have recognized Lukashenko’s election, they have not more vigorously supported him publicly.

Lukashenko may have thought through the consequences of his previous stance: “There will be no other elections, unless you kill me.” He appears to have reassessed his options and is triangulating back towards the Union State with Russia in hopes of weathering the protests and, perhaps, holding elections in the new state.

The West is bent on Lukashenko’s ouster and Putin is at best lukewarm. Domestically the intelligentsia are alienated, workers discontented, and even his security services show signs of disloyalty. Lukashenko may try to save his skin and the quasi-socialist state he founded by a “phased leadership transition.”

A small fish in a superpower sea

Despite the complexity of contending interests, international law and the principle of non-intervention in the internal affairs of sovereign states must be upheld. Belarus needs to have the freedom to resolve the crisis without outside interference.

Based on the examples of Ukraine, Moldova, Romania, and Poland, Armin Fischer, a German observer, warns that a color revolution in Belarus could bring:

the liquidation of state enterprises, mass layoffs, collapse of collective farms, mass exodus from the countryside and the death of villages…disintegration of the social infrastructure of daycare centers, hospitals, old people’s homes and the consequences for life expectancy, alcoholism and neglect…. In return, you will certainly get new oligarchs.”

“Free elections,” Fischer admonishes, would bring the “freedom” to be migrant workers competing for low-paying, undesirable jobs in Western Europe.

The leaders of the eighteen Communist parties of the former Soviet republics recall the consequences of the dissolution of the USSR in their August 18th statement on Belarus:

In Azerbaijan, Armenia, Georgia, Moldova, Russia, and Tajikistan, a bloody conflagration of fratricidal interethnic war broke out. In the Baltic States, the neo-fascists who came to power staged a real apartheid – they divided the entire population of their ‘independent,’ ‘democratic’ States into ‘citizens’ and disenfranchised sub-humans, the so-called ‘non-citizens.’”

Belarus under Lukashenko has its faults. Even so, a neoliberal coup would be worse for the people. The economic collapse of post-coup Ukraine, now the poorest country in Europe, serves as a cautionary example. Those who condemn the excesses of the present government need also consider the greater bloodbaths that followed rightist putsches in other former Soviet republics.

George W. Bush’s declaration of “you’re either with us or with the terrorists” epitomizes the dilemma of Belarus in a world dominated by a hegemonic superpower. The playbook is familiar. Years of foreign subversion feeding on genuine domestic discontent erupts into an orchestrated regime change movement.

Belarus shows that any small state with a mildly socialist system and independent foreign policy invites subversion by the Yankee hegemon and its collaborators. Even if Belarus had met the highest standards of democracy and efficiency, a western-backed color revolution might not have been avoided.

Featured image: A protester holds an old Belarusian national flag as he stands in front of police during a demonstration in Minsk, Belarus, Aug. 9, 2020. Sergei Grits | AP