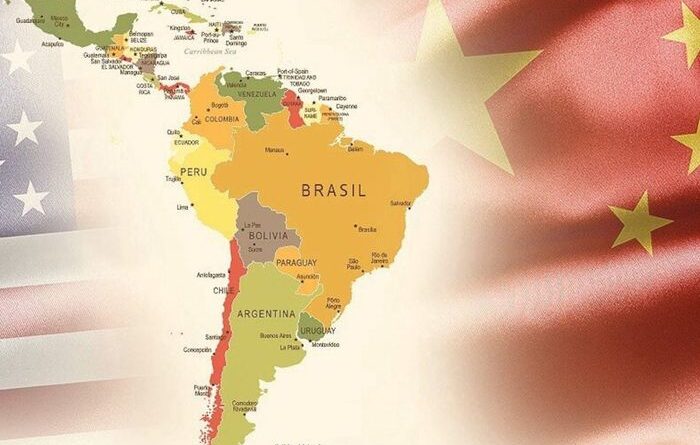 My recent pair of articles based on an interview with Professor David Arase of the Hopkins-Nanjing Center, published in Asia Times under the title Belt & Road Phase 2 moves beyond infrastructure and ‘Greater Eurasia’: Belt & Road expands in Africa, detailed the evolution of China’s Belt & Road Initiative beyond large infrastructure projects and its expansion in Africa.

This article follows up with a review of the Chinese economic and strategic presence in Latin America and the Caribbean, which is attracting more and more attention from concerned US foreign policy specialists.

For one thing, as Arase points out, “The number and distribution of port investment projects is impressive and can make China’s Maritime Silk Road circumnavigate the globe, from the South Pacific to Latin America, through the Panama Canal and the Caribbean to Brazil, and then to Belt & Road ports in West Africa.”

Overall, what’s happening undermines the notion that Latin America is the United States’ “backyard.” Admiral Craig Faller, the head of US Southern Command, recently told NBC News: “Chinese influence is global, and it is everywhere in this hemisphere, and moving forward in alarming ways.”

Cuba joins Belt and Road
On December 25, 2021, Cuba and China signed a “cooperation plan” for the joint promotion of the Belt and Road Initiative.

Call it a Christmas present for US President Joe Biden, Senator Marco Rubio and others in Washington, DC, who don’t like either country. Or a reminder that Taiwan is not the only offshore island of strategic interest.

Cuba joined Belt & Road in 2018 through a memorandum of understanding. The cooperation plan, in the words of China’s Global Times, clarifies the “key… projects for China and Cuba … including infrastructure, technology, culture, education, tourism, energy, communications and biotechnology, which are in line with Cuba’s development plans for the short and long term.”

RELATED CONTENT: China Moves Onto USA’s Doorstep by Signing Up Cuba to Belt & Road. Will it Cause a Standoff Like the 1962 Missile Crisis?

Along with communism, the US trade embargo has held down the Cuban economy since 1960. As an instrument of regime change, the embargo has failed. As a means of forcing the Cuban people into poverty unless and until they kowtow to the US, it has so far succeeded.

But now China may give Cuba a chance for economic development without American participation.

China – Latin America-Caribbean Forum
On December 3, 2021, the third ministers’ meeting of the China-CELAC Forum was held in the form of a video conference.

Founded in 2011, CELAC (Comunidad de Estados Latinoamericanos y del Caribe or, in English, Community of Latin American and Caribbean States) is an association for dialogue among its 33 members and with other countries and regional groupings including the European Union, China, the Russian Federation, the Cooperation Council for the Arab States of the Gulf, Turkey, the Republic of Korea and Japan.

The ministers adopted the “China-CELAC Joint Action Plan for Cooperation in Key Areas (2022-2024)”, a long and detailed document covering:

Did they forget anything?

Hot-button issues for strategic thinkers in Washington, DC, and Western European capitals include:

•  Strengthen exchanges between scientific and technological authorities, to increase synergies between the innovation, academic, and scientific sectors of the parties.

•  Strengthen exchanges and cooperation in the peaceful civilian use of nuclear energy and nuclear technology.

According to the IMF Working Paper “Chinese Investment in Latin America: Sectoral Complementarity and the Impact of China’s Rebalancing”:

•  “Over the last decade China’s investment in Latin America and the Caribbean (LAC) has increased substantially in volume and become more diversified.”

•  “Once heavily concentrated in fossil fuels, metals, agriculture and other natural resources, Chinese investment in LAC has increasingly tilted towards manufacturing and services industries such as transport, electricity, financial services and information and communication technology.”

•  “Asia – and particularly China – accounts for almost a third of LAC’s inward foreign direct investment stock, followed by Europe and the US, with shares of 30 and 20 percent, respectively.”

Brazil has received the most Chinese attention in the region, but investments and infrastructure project loans directed at Argentina, Peru, Ecuador, Venezuela, Colombia and Mexico have also been significant.

Electric power has become a major target of Chinese investment, with more than a dozen acquisition deals across LAC with an average size of over US$1 billion. Negotiations to build a new nuclear power plant in Argentina are currently underway.

Sizeable investments in port and harbor facilities have also been made, with projects in Mexico and Central America, the Bahamas and Cuba, Panama, Peru, Brazil, Uruguay, Argentina and Chile.

Geographically, these range from Ensenada, Mexico, about 100km from the US border, and the Bahamas, off the coast of Florida, to Punta Arenas at the southern tip of Chile.

Port and harbors, which could potentially be used by the Chinese navy, are of particular concern to the US government. In 2019, American and Japanese pressure put a stop to a project in El Salvador, but now it has reportedly been revived.

China has also built a radio astronomy and satellite tracking station in Argentina, about which a spokesman for the White House National Security Council stated: “The Patagonia ground station, agreed to in secret by a corrupt and financially vulnerable government a decade ago, is another example of opaque and predatory Chinese dealings that undermine the sovereignty of host nations.”

In telecommunications, to take another example, despite the US government’s attempts to shut it down, Huawei’s market in Latin America begins in Mexico and extends to Venezuela, Brazil, Chile and Argentina. A Huawei-built undersea cable connects Brazil and Africa.

This, it adds, will “enable us to offer new technologies like 5G, internet of things (IoT) and smart city technologies that will greatly benefit the region.”

CTA’s network also serves Sao Paulo, Brazil, Panama and the United States, and it connects to Europe and Africa.

As of December 2021, 19 out of 33 countries in Latin America and the Caribbean had signed up for the Belt and Road. In addition to Cuba, they include Jamaica and six other island states in the Caribbean; El Salvador, Costa Rica and Panama in Central America; and Venezuela, Guyana, Suriname, Ecuador, Peru, Bolivia, Chile and Uruguay in South America.

But some of China’s biggest Latin American investment partners – notably Brazil, Argentina and Mexico – have not formally signed up to the Belt and Road.

Nevertheless, China is now the largest trading partner of Brazil, Argentina and most of the rest of South America – the exceptions being Colombia, Ecuador and the Guianas.

America responds
In September, US President Joe Biden dispatched to Columbia, Ecuador and Panama a delegation consisting of: Daleep Singh, the deputy national security advisor for international economics; David Marchick, chief operating officer of the US International Development Finance Corporation; Ricardo Zúniga, principal deputy assistant secretary of state for Western Hemisphere affairs; and officials from the US Agency for International Development, the Department of Commerce, the Department of Treasury and others.

Their mission: to hear directly from a range of Latin American stakeholders to better understand the infrastructure needs within these countries and around the region.

This visit, the White House said, “demonstrated President Biden’s commitment to strengthening our ties with Latin America and to narrowing the massive global gaps in physical, digital, and human infrastructure that has been widened by the Covid-19 pandemic. The President’s vision for B3W is to work with partners that share our democratic values to finance and develop infrastructure in a manner that is transparent, sustainable, adheres to high standards, and catalyzes the private sector where possible.”

B3W is short for the Build Back Better World Initiative announced by the G7 in July 2021to counter China’s Belt & Road Initiative.

The extent of the new US and G7 commitment to Latin America should become visible in the months ahead. At the very least, the competition should enable countries in the region to get better deals from the US, Europe, Japan and China.

Featured image: China is moving in a big way into Latin America, a traditional sphere of US influence. Map: Ole Miss Center for Open Source Analysis