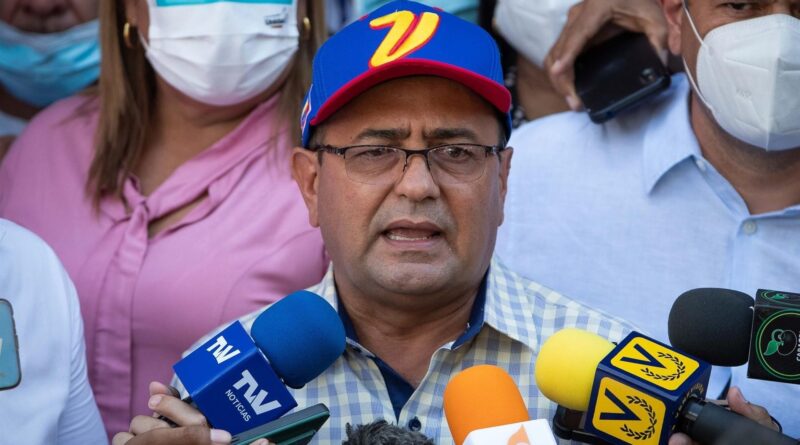 The Venezuelan opposition won on Sunday the gubernatorial election in the state of Barinas. Its candidate, Sergio Garrido, of the Mesa de la Unidad Democrática (MUD), defeated Jorge Arreaza, former Foreign Minister and Minister of Industry and National Production. The former obtained 55.37% of the support, against 41.26% of the latter, more than 13 points of difference, in an election in which 52.23% of the voters participated. The third, Claudio Fermín, also part of the opposition, obtained 1.77% of the votes.

The result was acknowledged by Arreaza, who, before the National Electoral Council (CNE) issued the official bulletin tweeted: “Barinas my beloved. The information we received from our PSUV (United Socialist Party of Venezuela) structures, indicate that, although we increased in vote, we have not achieved the goal”. Garrido, on his part, announced his victory from his campaign command: “Barinas won, Venezuela won, Unity won”, he affirmed, accompanied by different opposition leaders.

The election in the plains state of palm and sun was particularly important for several reasons. In the first place, it was a re-run of the November 21 contest, when, after the opposition appeared as the winner over Chavismo by a slim margin, the Electoral Chamber of the Supreme Court of Justice declared that the election had to be repeated. The reason given was the disqualification of the opposition Freddy Superlano since 2019, a decision which was questioned by the opposition, as well as by some public figures of Chavism.

The history of the Chávez family
The new date announced by the CNE was later accompanied by denunciations of the disqualification of other opposition candidates, such as Aurora Silva de Superlano, wife of the former candidate, and the candidate of the Communist Party of Venezuela, Aldemaro Sanoja. In this context, the campaign for an election took place in a state of strong symbolic charge for being the birthplace of Hugo Chávez, and for having been governed by Chavism for 23 consecutive years: first by his father, Hugo de los Reyes Chávez, then by his brother Adán Chávez -currently Ambassador to Cuba-, and finally by his other brother Argenis Chávez, who resigned his intention to be Governor after the defeat of November 21.

Barinas, the town of Sabaneta where Hugo Chávez was born and raised, is one of the foundational points of Chavismo’s history, part of its mythology, as, in terms of historical events, is the caracazo of February 27, 1989 or the uprising of February 4, 1992 in which Chávez appeared in the public scene. But Barinas is also a state marked by numerous material difficulties, of gasoline, gas or electricity services -like most of the country-, as well as by criticisms to the governors’ management, something repeated and known since several years ago. A popular Chavista organization, with work in the state, attributed, for example, the defeat to “a part, not all, of the leadership, which practices an autocratic way of doing politics, distanced from the bases, without ideological content, merely assistance-oriented, which treats the people as a reservoir of handouts”.

This situation of attrition in Barinas was implicitly recognized by Arreaza, who raised Chavez’ old slogan, “revision, rectification and reinvigoration”, within the framework of a campaign that placed the former President in the center, as opposed to other electoral bets of Chavismo which, for November 21, opted to leave aside, or put in the background, the most traditional red symbolism. Arreaza bet on a display of chavismo elements, from music to the sword of Simon Bolivar. “We managed to reconnect with the feeling, we managed to reconnect with the Chávez we carry inside (…) there was a disconnection, but we have managed to reconnect”, he affirmed in a press conference on Monday.

Arreaza pointed out that it was on the one hand a “quantitative defeat”, but on the other hand, a “qualitative victory of the Bolivarian Revolution in a difficult and adverse scenario”. The quantitative dimension was visible in the difference of Garrido and the growth of votes: between the election of November 21 and that of Sunday, January 9, the MUD went from 103,809 votes to 172,693, 66% more, while Chavismo grew from 103,693 to 128,583 votes, that is, 24% more. Garrido, a native of Barinas and a militant of Acción Democrática in Henry Ramos Allup’s sector, was not, until then, a leader of great strength or nationally recognized trajectory.

The result opens different doors of interpretation and possible courses of political action for each side. On the side of Chavismo, the new defeat in Barinas confirms the adverse situation in Chavez’s state, which could not be reverted even with a candidate of national scope and the great deployment of forces and resources. A question may be if this scenario is extensible to other states of the country or not. Although seen in terms of map, Chavismo has 19 out of 23 governorships, in the mayoralties it won 205 out of 322, and in terms of votes its tendency is, as seen in the last years, to a decrease. Chavismo, with a hard and largely organized core, is facing the question of how to grow again in a framework of strong generalized political erosion, where the division of the opposition is not, as was seen on Sunday, a guarantee of victory.

What strategy will the opposition face?
On the opposition side, despite the celebrations for Barinas, the panorama continues to be marked by fragmentation and lack of certainty as to the strategies to be followed. Sunday’s result was used, for example, to position in social networks the idea of a presidential recall recall referendum, which could be initiated this year. However, that proposal does not appear to be shared in the ranks of an opposition that can be subdivided into about four sectors, divided by public disputes within some sectors, with the figure of Juan Guaidó who was once again recognized as “interim president” by Washington, but who within the country is reduced to a grotesque virtuality.

Will the opposition seek a process of unification and accumulation of strength in the horizon of the 2024 presidential elections? Will it attempt the recall first? Will it opt again for a shortcut? The questions, which have several of their answers in the State Department, occur within the framework of what appears as the brake to the economic fall that has been maintained since 2014, a possible new growth of the GDP, with a visible greater circulation of money, dollars, consumption, areas of opulence in the east of Caracas, which coexist with the chronic difficulties of lack of water, electricity, gasoline or gas in many parts of the country.