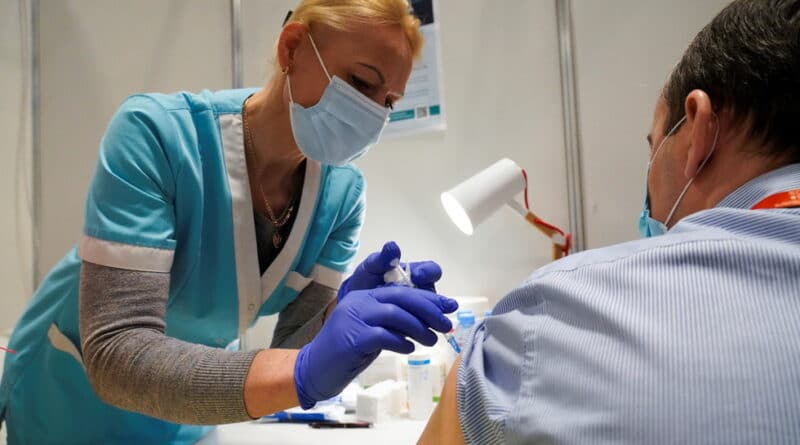 A potentially fatal blood-clotting disease is 30 times more common among people who have received the Covid-19 vaccines produced by Moderna and Pfizer than those given the troubled AstraZeneca jab, researchers have found.

A team of scientists from the University of Oxford has found that after vaccination, Vaxzevria (formerly AstraZeneca Covid-19 vaccine) recipients were less likely to suffer portal vein thrombosis (PVT) – blood clots in the artery from the intestines to the liver.

For recipients of the viral vector Vaxzevria vaccine, the incidence rate for splanchnic thrombosis – clotting in the portal and other abdominal veins – is 1.6 per million people, according to data from the EU drugs regulator the European Medicines Agency (EMA). By contrast, some 44.9 cases of PVT per million people were seen among those who had been injected with the mRNA vaccines made by Moderna and Pfizer, the Oxford research, published on Thursday, said.

Oxford University published an important study based on more than 489k mRNA vaccine recipients that shows that the risk of portal vein thrombosis appears to be 30 times higher with mRNA vaccines (Pfizer and Moderna) than with AstraZeneca’s. pic.twitter.com/boxPFjAOO4

MRNA vaccines work by teaching the body how to produce some of the Covid spike protein in order to generate an immune response to fight the virus.

Viral vector vaccines, including the Covid-19 jab made by Johnson & Johnson, instead work by introducing a mild form of the virus to trigger the body into producing antibodies.

RELATED CONTENT: Confirmed: There is a Link Between AstraZeneca Vaccine and Reported Thrombosis Cases – Haiti Rejects the Controversial Vaccine

The Oxford research comes after weeks of uncertainty for AstraZeneca’s vaccine after the EMA concluded that unusual blood clots with low blood platelets should be listed as “very rare side effects” of the jab.

Among the Oxford team’s other findings were that contracting Covid-19 exposes people to an “approximately 100 times higher” risk than normal of suffering another type of clotting called cerebral venous thrombosis (CVT).

The risk of the rare condition, which stops blood draining from the brain, was found to have an incidence rate of 4.1 per million people for those who’d gotten an mRNA vaccine, and 5.0 per million people among those who received the AstraZeneca jab, researchers said.

However, the study’s lead authors Professor Paul Harrison and Dr Maxime Taquet from the University’s Department of Psychiatry and the NIHR Oxford Health Biomedical Research Centre urged “caution” over the results.

“This data should be interpreted cautiously, especially since the data on the Oxford-AstraZeneca vaccine come from EMA monitoring, whereas the other data uses the TriNetX electronic health records network,” Taquet said.

RELATED CONTENT: The Business of COVID-19 Vaccines: The Most Heartless Example of Capitalism

Global blood-clotting concerns over AstraZeneca’s vaccine have persisted following the EMA’s review into the reports, which found that most cases were in women under 60 years of age.

Political commentator Anthony Webber told RT that the vaccine rollout should be “paused” until its effectiveness and safety can be properly assessed. He noted that reports linking the jabs to adverse reactions should come as no surprise because the vaccines have only received emergency approval and are still undergoing trials, a fact that the public should be made more aware of.

“We must remember that all of these vaccines are experimental. They’re officially experimental until about 2023. If the Covid vaccines hadn’t been rushed out, we would have had more time for experimentation” he said.

Scores of countries have since imposed minimum age restrictions for those receiving the vaccine, including France, the Netherlands and Germany.