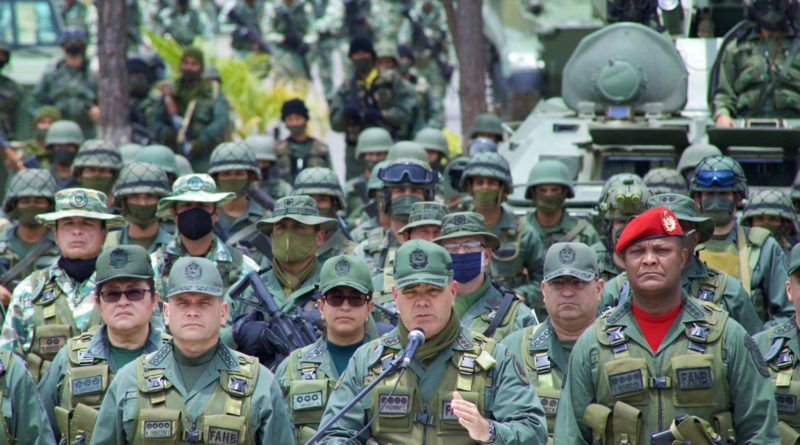 Defense Minister Vladimir Padrino López indicated that the Bolivarian National Armed Force (FANB) managed to neutralize a terrorist maritime incursion in La Guaira, which sought to assassinate high ranking government officials, promote a coup d’état and create chaos in the population. The FANB “categorically rejects these acts of irrational violence,” said Padrino, who indicated that President Maduro ordered the second phase of the Bolivarian Shield Military Exercises, which will begin in the next few hours throughout the country and will have special emphasis throughout the coastal region.”There will be strong searches, by air, sea and land, to detect any irregular element or conspiracy cell that wants to enter to destabilize the peace of the nation.”

It should be noted that in the early hours of this Sunday the Venezuelan state security forces neutralized a US led paramilitary incursion from Colombia, on the coast of La Guaira. The raid was attempted with speedboats and was neutralized by the immediate action of the FANB and the Special Actions Forces of the Bolivarian National Police (FAES). In the operation, some of the terrorists were killed, while others were arrested, and they also seized a military arsenal. “Thanks to the efforts we have made with all the intelligence and state intelligence agencies and the coordination promoted by the Strategic Operational Command and also all the military and police networks, we have tenaciously faced an incursion that was intended to project from the water to enter Venezuelan territory and continue their effort to destabilize the country and violate our sovereignty, which for us is sacred,” said Padrino López.

In his statement from Fort Tiuna, in the city of Caracas, he stated that “they are meddling with the most sacred thing that a soldier of the country has, which is his sovereignty, the integrity of our geographical spaces, which is our independence, are the inalienable rights that the Bolivarian Constitution invokes and commands us. We are never going to renounce those principles, those values, those rights, and, clinging to them, we have given forceful responses through different expressions to the oligarchic conspiracy.

The head of Defense reiterated that there is a strong leadership in the homeland of Bolívar, despite the constant aggression that countries of the world undertake against Venezuela. “Today civility and popular union have become a victory in defense of the Republic,” he said. Below the full text of the statement:

Today, Sunday May 3 of 2020, in the early hours of the morning, a group of terrorist mercenaries, organized and trained in Colombia, carried out a raid against our national sovereignty, by pretending to land with war material on the coasts of Macuto, La Guaira state.

This attack could be detected in a timely manner, thanks to the professional and scientific work of the intelligence and counterintelligence agencies, as well as the permanent execution of the military and police operation “Bolivarian Shield” , which guarantees the continuous surveillance of our entire geographical space. In this way, a new attempt at destabilization has been neutralized, which sought to wreak havoc and generate a spiral of violence in the Venezuelan community. As a result of the immediate reaction, several of the aforementioned mercenaries were killed in a confrontation, and others were captured, some linked to drug trafficking, who participated in the organization of the terrorist operation. A significant amount of weapons and equipment was also retained, highlighting part of the weapons that were stolen and used in the subversive action of April 30, 2019.

Divers from the Bolivarian Navy carry out in-depth search efforts to locate and recover equipment and weapons intended to be used by terrorists, who may be underwater, due to the capsizing of a boat. Likewise, the entire Territorial Defensive System, with the support of security agencies, carry out patrol and search operations, especially in the coastal region, in order to locate other possible parties involved and determine their connections, so that additional arrests are not ruled out.

This last action is added to a long list of attacks by the North American empire and its allies, which include criminal international sanctions against state officials and entities, economic – financial blockade, attempted assassination, assaults on military installations, sabotage of public services, and many others that only seek to affect the peace of the Venezuelan people, and overthrow the legitimately constituted government.

The Bolivarian National Armed Force categorically rejects these acts of irrational violence, before which we have always been victorious for the defense of the Homeland , unfailingly clinging to the Constitution, loyalty, our libertarian and democratic convictions, and the civic-military union that Supreme Commander Hugo Chávez bequeathed to us.

On this occasion, the Republic’s weapons have once again triumphed!

All military units throughout the national territory remain on alert, prepared to respond forcefully to any other threat. Likewise, we reiterate absolute loyalty to the citizen Nicolás Maduro Moros, Constitutional President of the Bolivarian Republic of Venezuela, our Commander in Chief, and the irreducible commitment to guarantee the sovereignty and independence of the Nation.

“Independence and Socialist Homeland … We will live and overcome”