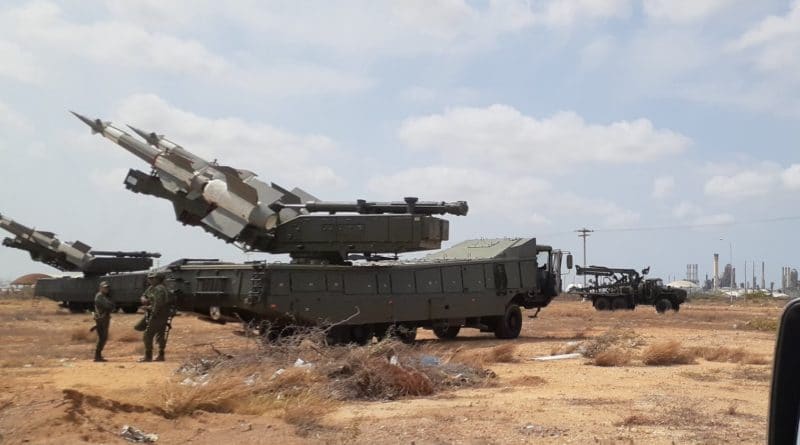 Right wing @ConflictsW reports the deployment of S-125 air defense system near Amuay refinery (biggest refinery in Venezuela). Fascist call for US invasion and they think we will be hiding under a rock. Rest assure that we won’t make it easy for you “gringos de mierda”… #amuay https://t.co/r7FOEAvm12

“We are working on the mobilization stage for the military exercise, Bolivarian Shield II 2020 “, which will be in the execution phase on March 9 and 10. This is how the FANB is on high alert, being guarantor of independence, sovereignty and territorial integrity,” said the high military chief during an interview in the program “Territorial Defensive System Guaranteeing National Sovereignty!”, broadcast by the Circuit Radio Tiuna FM, “The voice of the Bolivarian National Armed Forces”, this March 7.

Solís Martínez said that framed in the military exercise “Bolivarian Shield II 2020,” the FANB is prepared to participate with impetus in the defense of the homeland, raising the operational readiness of the military institution and its Bolivarian militia, indicating that they have been practicing exercises to simulate situations that may occur according to threats to national sovereignty.

He described the military drills “Bolivarian Shield 2020” executed on February 15 and 16 as a resounding success, referring to the continuity of this exercise now called “Bolivarian Shield II 2020,” which will be carried out in the next days.

In addition, he announced the different functions performed by the Joint Strategic Planning Directorate of the CEOFANB. Among them, he mentioned the following: Direct scenarios elaboration processes, Programming and planning control of the CEOFANB with the Bolivarian Militia and the Strategic Regions of Integral Defense.

The Joint Director of Strategic Planning also referred to the Sucre Plan, which consists of the development of the Bolivarian national armed forces, aligned with the constitution of the Bolivarian republic of Venezuela, with the constitutional law of the FANB, with the plan of the homeland and its historical, national and strategic objectives. Thus, the main objective is to adapt the FANB to the new scenarios and threats, reinforcing the territorial defensive system, allowing all this to affirm that “it is a perfect organization of a FANB deployed territorially to make it impregnable aligned with the civic-military union”.

Finally, the GD Solís Martínez gave a message of unity to the entire Venezuelan population to continue achieving the objectives and thus achieve the mission of maintaining the integrity of the FANB and the integral defense of the Nation.