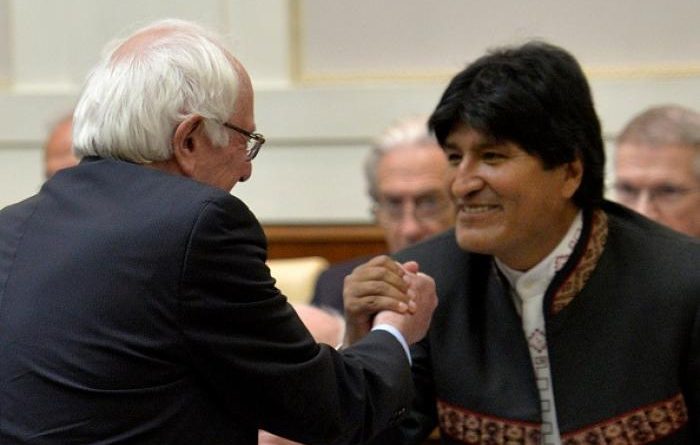 The lack of criticism about the destruction of democracy in Bolivia from the presidential candidates in the so-called democratic party of the faking United States of America is possibly the single most revealing non-event in the charade of the 2020 electoral scheming. It is more telling than all of their words. The only one of this group who has so far made a statement about the military pushed resurgence of fascist impunity in Bolivia is Bernie Sanders. His tepid expression of concern included an avoidance of saying this was a coup (he said it “appears to be” a coup) and he made an appeal to peaceful and democratic processes in Bolivia (as if the reality of the violent destruction of democratic processes had not just happened!). So, a mealy-mouthed concern is the best the would-be presidents who call themselves democrats could muster to supposedly counterbalance the enthusiastic and deceitful endorsements of fascism by the republicans and Trump administration. The fact that Morales still had a couple of months left in his term as president of Bolivia as he was removed under the threat of greater violence definitely makes this a coup. It “appears to be a coup” because it is a coup. Saying it only “appears to be” something is a way of possibly later backtracking and is suspiciously unnecessary.

The silence over this latest display of international fascism by those who would lead the government of the faking USA can only be heard as a silent affirmation of what has transpired in Bolivia. This silence is NOT part of a counterbalance at all. The silence and the tepidity of these democrat would-be presidents is a bland, blank backdrop upon which the smug privatization and militarized cruelties of fascists can be be displayed and celebrated while the so-called democrats may appear to be “very concerned” about democratic processes.

A very interesting component of this fascist coup is that it clearly shows that Trump and Canada’s Trudeau are openly seeking the same results. No wonder Barack Obama tried to manipulate the voters in Canada recently to keep Trudeau in power. In a very real sense, the democrat’s darlings are in the same corporate capitalist church as the Trumpians. Throughout the Bush II and Obama administrations, Bolivia’s Morales was held in contempt because of his lack of fealty to internationally predatory corporatists. It is no wonder Trump and Trudeau are celebrating this fascist destruction of democracy. Trump’s presidency has helped finally achieve (through the manipulations of the Organization of American States – which is largely funded by the faking USA and the faking Canada) the Hope and Change which the Bush and Obama presidency were seeking.

The faking democrats in the faking USA are notorious for their ability to say one thing and then do the opposite, just like their partners who call themselves republicans. Neither of these corporately controlled militaristic organizations really believe in a republic which has boundaries or in democracy. They both believe that capital worshipping domination of life and private power are the pragmatic attributes of freedom.

Private capitalist impunity is in the process of disemboweling Bolivia under the encouragement of elitist bible-waving fascists and the closest any prominent presidential candidate (Sanders) in the faking USA can get to addressing this assault on democracy is to promote the idea that the assaulted and crippled democracy will be allowed to challenge or (even less likely) resolve any part of this coup. Bolivia is in a process of being returned to its pre-Morales status as an internationally driven poverty state of detrimental extraction and the first thing being removed by this fascist corporatism – which is overwhelmingly being given silent approval by democrats – is democracy.

If there was “fraudulence” in the recent Bolivian elections (as was claimed by the OAS tool of privatizing capital), it was of an extremely minor sort when compared with the mountainous amounts of fraudulence which are throughout the electoral systems and international manipulations of the faking USA and Canada. Also, the fact that Russian interests are not served by this Trump supported coup in Bolivia (as was also the case in the coup attempt in Venezuela and the offensive against Cuba) is another indicator that the years of obsessing and pouring energies into trying to portray Trump as a Russian asset was a phony ploy by the democrat wing of this predatory corporate bipartisanship.

As of this writing, two congressional democrats have definitively called this a “coup.” Ilhan Omar and Alexandria Ocasio-Cortez. Unlike Sanders, they are not hedging their description of events and together they represent just over 1/3rd of 1% of the 535 members of both “houses” of the congress. They are clearly out of step with the preferred bipartisan corruptions of the congress. I can only imagine the crap they are getting from their own party.

The calls for democratic process in Bolivia are, at this point, delusional. That avenue has just been ripped apart by internationally supported, liberally deceitful fascists and rendered a desolate arena for displaying greater injustices by predatory corporate pirates.

The silence of the democrats is part of an endorsement by the congress toward the events in Bolivia and is of the same arrogance as the approval of this coup by Trump and the republicans.