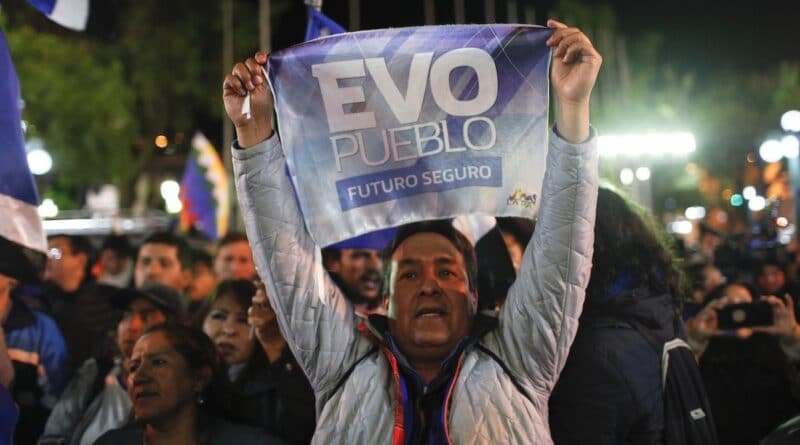 Massive support for Bolivia’s Movimiento al Socialismo at the polls is a rejection of last year’s Canadian-backed coup against Evo Morales. The vote was also a blow to Trudeau’s policy of seeking to overthrow left-wing governments in the region.

On Sunday Morales’ former finance minister, Luis Acre, won 55% of the vote for president. His MAS party also took a large majority in the Congress.

The unexpectedly large victory is a decisive rebuke of Ottawa’s support for the ouster of Bolivia’s first indigenous president. Hours after the military command forced Evo Morales to resign on November 10, then foreign affairs minister Chrystia Freeland released a celebratory statement declaring, “Canada stands with Bolivia and the democratic will of its people.”

Ottawa provided significant support for the Organization of American States’ effort to discredit Bolivia’s 2019 vote, which fueled opposition protests and justified the coup. Ottawa promoted and financed the OAS’ effort to discredit the presidential poll and two Canadian technical advisers were part of the audit mission to Bolivia. “Canadacommends the invaluable work of the OAS audit mission in ensuring a fair and transparent process, which we supported financially and through our expertise”, noted Freeland at the time.

But, the OAS audit mission was designed to precipitate Morales ouster. A slew of academic and corporate media studies have demonstrated the partisan nature of the OAS audit mission and the weekend’s election results confirm it. Still, Global Affairs promoted the organization’s involvement in Bolivia’s elections. On Saturday their Canada in Bolivia account tweeted, “Canada is pleased to support the Organization of American States (OAS) electoral observation mission to Bolivia.”

For a year Ottawa stayed silent while the unelected Jeanine Anez regime ramped up repression and anti-indigenous measures as well as drastically shifted the country’s foreign policy. Worse than silence, on Bolivia’s national day in August Global Affairs claimed Canada and Bolivia’s “strong bilateral relationship is founded on our shared values of democracy, human rights and a celebration of diversity.”

Global Affairs ignored the ‘caretaker’ government’s repeated postponement of elections. Even worse, when the country’s social movements launched a general strike in August to protest the ‘caretaker’ government’s repeated postponement of elections Global Affairs echoed the coup government’s claims that the protests undermined the fight against the pandemic. Canada in Bolivia tweeted, “Canada calls for humanitarian aid to be allowed to circulate freely in Bolivia to fight #COVID19 & calls on all social actors to support the country’s democratic institutions and to use those mechanisms to resolve any disputes.” (Protesters let ambulances and other medical vehicles circulate with little disruption.)

Looking at a year of the Canada in Bolivia Twitter account I did not find a single criticism of the coup government. But, there were more than 15 posts critical of the Venezuelan government. On October 14 Canada in Bolivia tweeted, “the conditions needed for free and fair elections do not exist in Venezuela” and linked to a Lima Group statement declaring renewed “support of President Juan Guaidó.” (After usurping power Anez joined the Lima Group of countries seeking to oust Nicolas Maduro’s government.) Two months earlier the account called for “concerted international actions in support of a peaceful return to democracy in Venezuela” and linked to a Lima Group statement reiterating their “firm commitment to interim president Juan Guaidó.”

Contrasting the Trudeau government’s response to an unelected, anti-indigenous, elitist government in Bolivia to that of Venezuela’s elected, pro-poor president is telling. So is their silence on the election results in Bolivia. Nearly 72 hours after the polls closed Ottawa has yet to release a statement congratulating Arce or the MAS on their massive victory.

The election results in Bolivia are a major blow to Canadian policy in that country and Ottawa’s bid to wipe out the remnants of the leftist pink tied in Latin America.

Further, the victory of MAS shows Canada for what it has always (unfortunately) been: an imperialist power seeking to maintain the world’s massively unfair status quo.

Featured image: A supporter of Bolivian President Evo Morales outside the presidential palace in La Paz, Bolivia, after a first round presidential election, Sunday, October 20, 2019. Photo by Juan Karita.