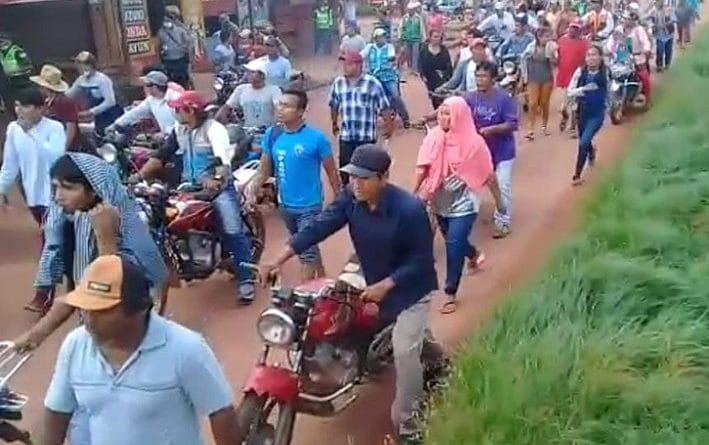 On Tuesday the population of Riberalta and Trinidad, in the department of Beni, in the north of the country, near the border with Brazil, decided to break the quarantine and take to the streets to demand the delivery of the family basket promised by the de facto government which has not been fulfilled to date.

The population was called upon to march to make their demands heard in order to demand food and work. The military was overwhelmed and could not contain the people who have not been able to comply with the quarantine because they were forced to go out to look for food. Let’s remember that, in Bolivia, a high percentage of the population lives from street vending and personal ventures, and depends on these for its livelihood.

The sector of taxi drivers went to the front of the march with horns, demanding that they be allowed to work at least half a day since they argued they live from day to day. A lady from Trinidad demanded that, “The president should not forget her people, because they supported her here. Now we don’t have anything to eat, they don’t let us work and our children ask us for bread because they are hungry. Beni is the department where Jeanine Áñez was born and where she had important political support in the past, but it had begun to break down some time ago and with the arrival of the pandemic, it became more pronounced with no turning back. Another woman said “I have my son who is three years old and he tells me that he wants to eat but I cannot go outside because I am afraid that they will arrest me and if I am arrested who will look after him? I demand that they let me go out and get food for my children because if not they are going to die of hunger, not from the disease.”

The mayor of Riberalta, Enzo Roca, washed his hands of the situation and stated, “That is not in my power, it is in the power of the military and they are the ones who enforce the decree.” But that was dismissed by others who said, “We can no longer wait. This is not about politics; it is about the Bolivian people who do not have anything to eat.”

In their demands, men and women of Beni said that they need to be able to work at least half a day to subsist, because people have no other option, even if they are exposed to the infection of the coronavirus. They do not receive any economic aid from the de facto government, the state in Bolivia is totally absent for the humble people. So it has become impossible for people to comply with quarantine for much longer as the only way to avoid Covid-19 is through isolation and social distancing.

The de facto government not only fails to help the Bolivian population economically but has also deepened the violence towards the people as can be seen in the harshness of the excessive fines for violating the quarantine, which run above $100. In addition, they have been threatened with up to 10 years in prison for those who violate the measure. This social situation that Beni is going through is being repeated in every department of Bolivia, but it has not yet exploded throughout the country but it’s likely only a matter of time before that happens. This is the main reason why the call for the resignation of Jeanine Áñez is growing stronger and it is being expressed the clearest in the strong “cacerolazos” that the Bolivian people carry out every day.

This panorama of political and social crisis, which already existed due to the coup d’état, and which has been deepened by the pandemic, is added to the health crisis that the country is going through, where we observe that the de facto government does not have a serious strategic plan on how to deal with the pandemic, and like in the US it does not even know how many respirators the country has, it doesn’t have a comprehensive tally of how many tests to detect the disease have taken place, there is no professional training on the subject, there are no supplies or personal protection equipment for health care personnel, there are no isolation centers, there is no serious repatriation plan, and despite the pleas of the Bolivian people, the coup government is refusing help from the Cuban doctors. Both the health personnel and the Bolivians are being abandoned by the de facto government to their own fate that instigates an [attitude of] “every man or woman for themselves.”

Meanwhile, this has not stopped Jeanine Áñez from proselytizing and takes advantage of the quarantine to paper and paint the cities with advertising for her party, which shows that she does not take the pandemic seriously and shows what little value she places on the lives of Bolivians. Even the right-wing Página 7 newspaper has criticized this attitude, asking her to give up her candidacy in the postponed elections that were to be on May 3.

Bolivia is at a crossroads, which can only be addressed by a government that takes on the crisis by assuming the responsibility to take care of its population, for example, as the Argentinean government is doing. They need to call for unity among different sectors of society, leaving aside ideological differences to face a moment of social and health emergency, but for this Áñez lacks legitimacy as hers is a government that did not arise from the popular will. To see Áñez take up anything close to this challenge, that is her responsibility as president of Bolivia, seems very distant. How the political crisis and the health crisis evolves in the country can have unpredictable consequences. This situation is also framed in a context in which the U.S. does not stop watching over its interests in Bolivia, which is why last January Mike Pompeo, the empire’s secretary of state, ordered Jeanine Áñez not to let Cuban doctors enter the country.

In response to the demands of the people, Áñez set a date for the delivery of the family basket.

During the march on Tuesday people shouted: “Let the president come out”, which finally happened on T.V. in order to set a date for the delivery of the family basket, and will be in cash so as not to delay the delivery any longer: “This coming April 3rd we will begin to deliver the family basket that we promised in cash. We will deliver 400 bolivianos (about $57 USD) to the poorest households. More than one million citizens will receive these resources in cash. This cash basket is for; 1) people who receive the dignity rent, but who do not receive any other income or retirement. 2) For mothers who receive the Juana Azurduy bonus. 3) For persons with disabilities. In the second week of April, we will give another cash aid to the families, the family bonus, it is a bonus of 500 (about $71 USD) bolivianos per child that all the families that have children studying in the initial cycle, that is, pre-kindergarten and kindergarten, in the primary and in the public schools. At the same time, and as has already been announced, we ratify that electricity and water are reduced by three months, but today we also add to this aid a reduction of 50% for household gas, and in the same way we ratify that the payment of taxes and credits for families will be postponed.”

After the message of Jeanine Áñez a wave of complaints were unleashed about how these measures remain insufficient, and that these one time handouts were to try and release tension. They only reach a small sector of the population because they leave out, for example, free transportation and that also spurred people to break the quarantine and march.

The de facto government recently received a $1 billion loan from the Central Bank of Bolivia, so it is clear that it is not short of money to invest in health and social assistance. What is missing is a serious political decision to take care of the lives of Bolivians in the face of the pandemic, taking measures to address the health emergency and economic aid that the people are begging for. Instead, what is happening is that repressive policies are being reinforced. On the other hand, in the midst of the world’s quarantine, when the virus in Bolivia was already apparent, $5 million was invested through Decree 4168 in the purchase of more arms to repress the population.

Evo Morales’ government had left a GDP of US $40.581 billion, the highest in the country’s history, and consolidated itself for six years as the fastest growing economy (2009, 2014, 2015, 2016, 2017 and 2018) in South America. This was the favorable context self-proclaimed President Áñez inherited, who has just received a million-dollar loan from the Central Bank of Bolivia and who now has the IMF neoliberal doors open to her, which shows that the problem of the de facto government in dealing with the pandemic is not an economic one, but one of the purely political issues.

Featured image: Protest in the Department of Beni