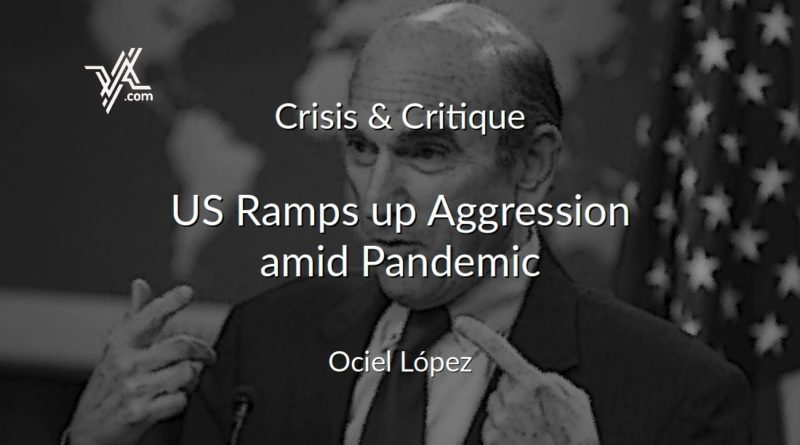 Washington’s latest escalation may have blocked an urgently needed political settlement in Venezuela to battle the coronavirus.

Venezuela has been one of the countries least affected by the coronavirus pandemic in the region so far. Nevertheless, the US government is attempting to exploit the situation in order to force a violent outcome to the country’s political standoff, putting a price on the head of Maduro and other top functionaries as well as pushing a new “transition” plan to depose the government in exchange for sanctions relief. Meanwhile, Venezuela’s attorney general has summoned Guaido for questioning on April 2. Far from bringing about a truce, the coronavirus has raised tensions to new heights.

On the verge of a truce

The pandemic has caught Venezuela’s opposition in a rather uncomfortable position. Their strategy of not recognizing Maduro and the never ending simulacrum that is Guaido’s “interim presidency” is, fourteen months later, an abject failure in terms of concrete achievements. Guaido’s virtual staying power is owed almost exclusively to Donald Trump, who invited him to the White House at the close of his international tour in February.

But this strategy leaves a vacuum in the opposition. The existence of an “interim president” precludes that of an opposition leader who can channel requests, critiques, and demands toward the government. Guaido is instead forced to speak as a president but without any state resources at his disposal to confront the COVID-19 crisis. Some of Guaido’s spokespeople such as his foreign relations envoy, Julio Borges, issue statements that are woefully out of touch with the gravity of the international conjuncture: “The coronavirus is Maduro and there will be no cure until he leaves power.”

For his part, Maduro, comfortable and without internal resistance, rapidly implemented the World Health Organization’s guidelines, decreeing a national quarantine within days of the first case being reported on March 13.. Maduro also managed to meet not only with the country’s principal chamber of commerce, FEDECAMARAS, but also with Colombia’s health authorities, a fact which Colombian President Ivan Duque publicly denied. He additionally secured aid from Cuba and China, which have emerged as global leaders in COVID-19 response. Meanwhile, the United States and Guaido’s other Western sponsors are mired in an unprecedented health crisis due to the number of dead and infected.

On March 23, the European Union publicly called for the International Monetary Fund to accept emergency loan requests from Venezuela and Iran and for relief from US sanctions, which according to EU foreign policy chief Josep Borrell, “block them from receiving income by selling oil.” UN Secretary General Antonio Guterres also urged the lifting of unilateral coercive measures in the face of the pandemic.

The situation seemed favorable for Maduro’s struggle against the US economic blockade.

In this context, the coronavirus was on the verge of bringing about the unthinkable: an agreement between the opposition and the government. Henry Ramos Allup, the president of Venezuela’s main opposition party, announced on March 10 that Democratic Action would abandon its prior abstentionism and compete in parliamentary elections scheduled for 2020. Amid the global COVID-19 hysteria, former presidential candidate Henrique Capriles opened the possibility for an agreement with Maduro when he stated on March 25:

This pandemic must create an opportunity to pursue some kind of agreement that looks after people’s wellbeing…Let’s work together: you have internal control, and I have international support. You are willing to come to an agreement to join hands. Could it be that difficult? I don’t think so.

That very night, there were two, almost parallel reactions. Maduro said, “I agree with Capriles’ proposal,” and asked the Vatican’s representative in the country to mediate and open its offices for a meeting with the different opposition factions as soon as possible.

Minutes later, Guaido stated, “we are willing to do everything we have to do,” implicitly recognizing the need for an agreement to address the health emergency. However, he did enumerate certain conditions regarding the distribution of humanitarian aid, which should be managed by multilateral organisms and not the Maduro government.

Venezuela’s dueling political factions appeared to be on the verge of engaging in substantive talks, but it was not to be.

The next day, on the morning of March 26, US Attorney General William Barr gave a press conference announcing “narco-terrorism” charges against Maduro and other senior government officials.

As expected, the charges were endorsed by Trump in the midst of the COVID-19 crisis, effectively torpedoing negotiation efforts and once again raising tensions to a boiling point.

This is hardly the first time that the US has blocked dialogue. When in early August 2019 rumors were circulating of something resembling an electoral pre-agreement emerging from Norway-brokered talks, the United States ramped up sanctions with an August 5 executive order banning all dealings with the Venezuelan state and freezing its assets in what some analysts have linked to the Cuba embargo. The next day, Maduro abandoned talks.

The government had also previously claimed in February 2018 that a last minute call by then US Secretary of State Rex Tillerson to the head of the opposition negotiating team, Julio Borges, led the opposition to walk out in lieu of signing a finalized electoral deal. This was the fruit of months of negotiations mediated by former Spanish President Jose Rodriguez Zapatero and the Dominican government, and the agreement concerned guarantees for the 2018 presidential elections, which the main opposition parties opted to boycott.

With this latest decision, Trump ups the ante. On top of punishing economic sanctions, the US now places a multi-million dollar bounty on the head of Maduro and other top officials, giving the green light to renewed violent actions aimed at killing or capturing them.

But the move also aborts the nascent negotiation efforts recently underway. Rather than paving the way for an invasion, indictments open the way for paramilitary operations of the sort one might find in a Hollywood movie. Recall that neighboring Colombia is a country littered with irregular armed outfits. Just a few days ago, following the seizure of an arms cache in northeastern Colombia, retired Major General Cliver Alcala confessed to a plot to overthrow Maduro in coordination with Guaido and US advisors. Paradoxically, the general confirmed the coup plan only after he was indicted by the US Justice Department, subsequently turning himself in to Drug Enforcement Agency officials and traveling from Colombia to the US.

Several days later, on March 31, US Secretary of State Mike Pompeo, in a more conciliatory but equally arrogant tone, unveiled a “transition” plan proposing the creation of a “council of state” comprised of opposition and Chavista representatives, with both Guaido and Maduro stepping aside and new elections called. The Venezuelan constitution contains no provisions permitting such an arrangement, which has already been rejected by Foreign Minister Jorge Arreaza.

The government did not delay in rolling out its response. The attorney general summoned Guaido to appear for questioning on April 2 and it is very possible that he could be taken into custody after Alcala publicly named him as responsible for terrorist actions to be carried out with the arms confiscated in Colombia. With Guaido behind bars, another scenario opens up, and all that is left is to await a more decisive response from the US.

Meanwhile, we must not forget the arena that has taken center stage at present: healthcare.

Coronavirus and the collapse of the health sector

This escalation of conflict comes not only in the context of coronavirus, but also at a moment of deep crisis in Venezuela’s healthcare system, which could be rapidly overwhelmed if Venezuela’s curve mirrors that of other countries.

I have seen myself how the health system is on the verge of collapse, with many hospitals lacking the most basic water and electricity infrastructure. Hospital patients, many of whom are already critically ill, are at high risk of losing their lives from new infections they are acquiring while they are in hospital, because basic cleaning and disinfection cannot be done. This is exacerbated by a lack of medicines, and a shortage of doctors and nurses to administer them. Preventable diseases including malaria and diphtheria are back with a vengeance. People with chronic health conditions, pregnant and nursing women, infants and those living with disabilities are among the most vulnerable.

No matter how much the government emphasizes its strength in the health sector owing to the support of its allies, the reality is that the system has suffered severe deterioration. If we project a Italy or Spain-style curve in Venezuela, the result could be not just a health sector collapse, but a catastrophe in every arena of life.

For this very reason, Washington’s bellicose measures provoke widespread animosity among diverse national and international constituencies. On the one hand, Chavismo automatically closes ranks behind the government, which implements stronger security measures that block efforts to open up the political field. On the other, the opposition factions that were engaged in or calling for dialogue with the government are now shut out of the game because it will be very difficult for them to compete in parliamentary elections to be held later this year. And if the main opposition parties do not participate, like in the last few elections, they will lose the only real power they have left: the National Assembly. The majority of opposition political actors have reacted with caution and have not automatically supported the US’ actions.

Washington’s latest maneuvers also fly in the face of positions taken by US allies like the European Union, as well as other multilateral bodies, which have called for lifting sanctions on Venezuela and Iran. Washington’s “kick them while their down” approach may appear disproportionate in the face of the current crisis, but we must remember that the US presidential campaign looms large and the Venezuela issue is key to winning the critical state of Florida.

For his part, Guaido may try to dust off the “humanitarian aid” discourse that he had dropped from his political repertoire after the opposition’s US-backed effort to force food and other supplies across the Colombian border in February 2019 ended not only in failure but in a corruption scandal that has dogged the “interim president” ever since. The US, Colombia, and Guaido’s other allies could make a fresh attempt at “humanitarian intervention” amid the current situation of international panic. US Deputy Assistant Secretary of State for Cuba and Venezuela Carrie Filipetti recently prepared the ground for this possibility, stating that the COVID-19 contagion in Venezuela could pose a regional threat.

This discourse is illogical given that according to official figures Venezuela has much fewer cases than its neighbors, while the US is now the global epicenter of the coronavirus outbreak. But when it comes to US-Venezuela relations, official discourses have little concern for facts. Anything can happen, above all, if elections requiere putting a face on the “invisible enemy.”

Featured image: Ociel Lopez looks at the escalating US aggression against Venezuela amid the coronavirus pandemic. (Venezuelanalysis)