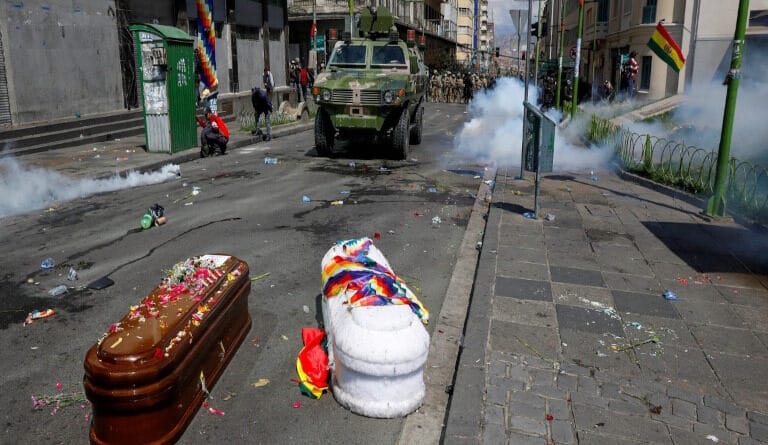 On Friday, September 3, families of victims and survivors of the massacres that took place in the Bolivian towns of Senkata and Sacaba after the 2019 coup marched in the capital, La Paz, demanding justice for these and other acts of violence that were perpetrated by Jeanine Áñez’s de facto government.

November 2019 is remembered by Bolivians as one of the most violent in the recent history of their country, due to the extreme repression unleashed by the police and military under orders of the coup administration that had usurped the government at the time, overthrowing the democratically elected government of Evo Morales.

Victims of Bolivia's Senkata & Sacaba massacres are marching together, now in La Paz, to demand justice and to reject attempts to free the 'murderer' Jeanine Añez. pic.twitter.com/mcUMhxLY21

Back then, security forces harshly repressed peaceful protesters who were defending democracy and demanding the return to power of the constitutionally elected president, Evo Morales, who had been forced to resign and flee the country. As a result of the repression, 38 people lost their lives in Senkata and Sacaba.

Roberto Jucumari, vice president of the Association of the Deceased, Injured, Prosecuted and Persecuted Victims for the Defense of Democracy of Sacaba, informed that this was a massive march that had summoned all social organizations and representatives of all those who had suffered from the coup violence.

The association also announced that it will carry out a national survey to identify everyone who had been killed, injured, detained or tortured in the aftermath of the 2019 coup.

Meanwhile within the Plurinational Legislative Assembly of Bolivia, the opposition has tried to create maneuvers to prevent trials of those responsible for the massacres. The trial would try to deliver to the victims of the coup justice and comprehensive reparation.

In this regard, Bolivian Deputy Minister of Communication, Gabriela Alcón, called for legal action to be made viable as an indispensable step to overcome the trauma that the 2019 coup d’état left in Bolivian society. Alcón, in a local television interview, stated, “We urge the Legislative Assembly to respond to the 38 victims and all the families who were affected by the violation of human rights, by extrajudicial executions, by massacres; by what has happened in our country and, in this way, we will comply with the mandate of true justice and comprehensive reparation.”

Featured image: At least 38 people died in the massacres carried out by police, military, and paramilitary forces in Sacaba and Senkata during November 15-19, 2019. File photo.