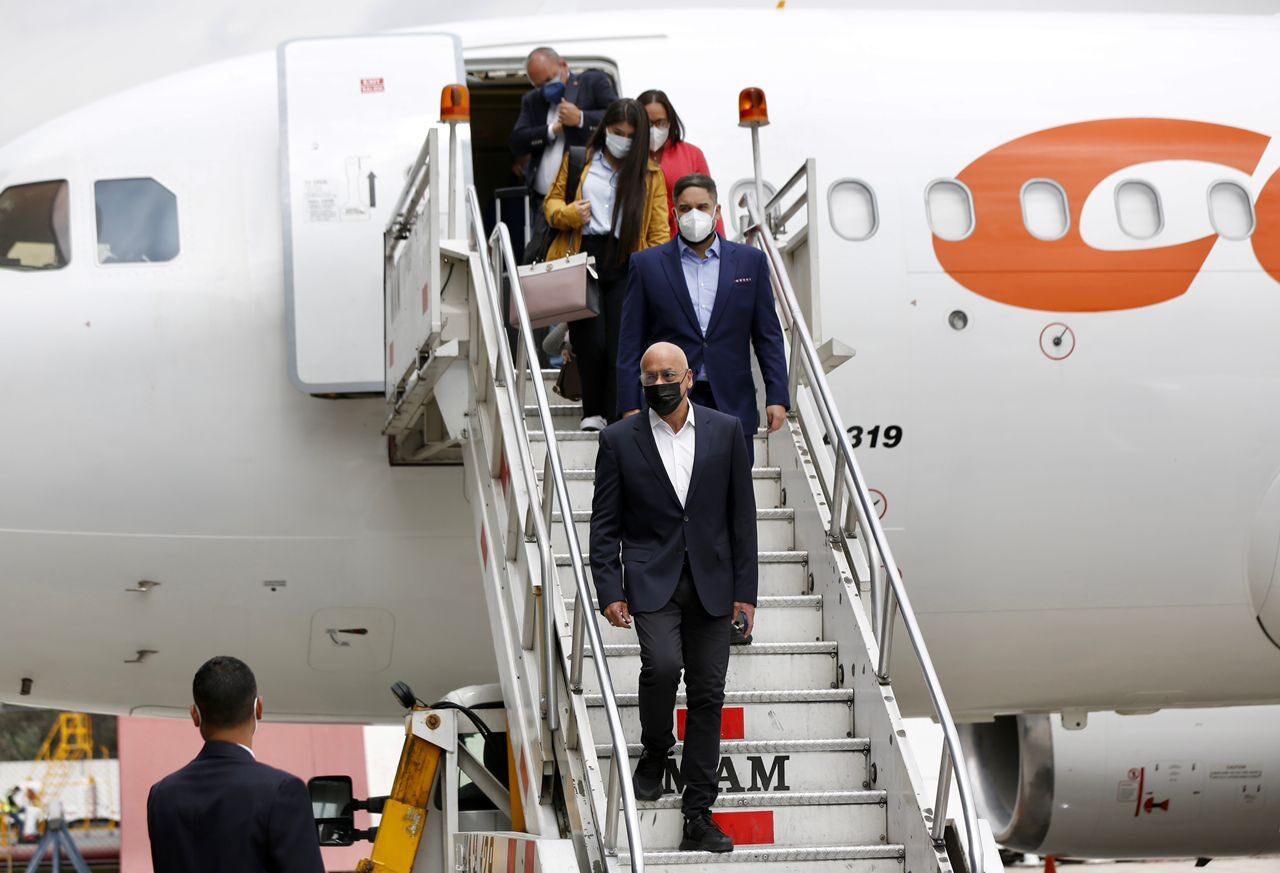 Venezuelan government delegation arriving to Mexico for participate in the second round of the Mexico Talks. Photo courtesy of Twitter / @jorgepsuv .

In compliance with the recent request by the Venezuelan head of state, Nicolás Maduro, the Venezuelan government’s delegation for the Mexico Talks, headed by deputy Jorge Rodríguez, arrived in Mexico today for the second round of talks with a segment of the opposition.

In his first statements at Benito Juárez airport, in the Mexican capital, Rodríguez introduced the entire delegation to be seated at the negotiating table on behalf of the Venezuelan government, and expressed his conviction that the sessions would be fruitful.

Besides Jorge Rodriguez the delegation members are:

“We arrive with sizable expectations,” said Rodríguez. “We have received the request of President Nicolás Maduro to emphasize, in these first hours of the talks, the return of the assets that have been stolen from the people of Venezuela.” Rodríguez referred to the government’s primary agenda objectives: lifting of the US and European economic blockade, and the restoration of Venezuelan assets abroad illegally seized by representatives of former deputy Guaidó, with the aid and support of Washington and some European countries.

Similarly, Jorge Rodríguez, President of the Venezuelan Parliament, thanked the government of  Mexico for the very generous reception provided to the delegations involved in the dialogue.

“I think it is reassuring, for Venezuelans, that those who promoted violence, invasions, illegal actions against the tranquility of the people, now return to what the Constitution establishes as rights,” he commented, in reference to the announcement by the political parties united in the G4 that they will participate in the regional elections scheduled for November 21.

Meeting with President Maduro
On the eve of the second round of talks, the Venezuelan head of state, Nicolás Maduro, met at Miraflores Palace with members of the delegation, led by Rodríguez.

Also participating in the meeting were Héctor Rodríguez, governor of the state of Miranda; Gabriela Jiménez, Minister of Science and Technology; and Nicolás Maduro Guerra, Francisco Torrealba, Diva Guzmán and Génesis Garvett, members of the National Assembly. In addition, the Deputy Minister of Anti-Blockade Policy, William Castillo, and the Executive Secretary of the National Human Rights Council, Larry Devoe attended. 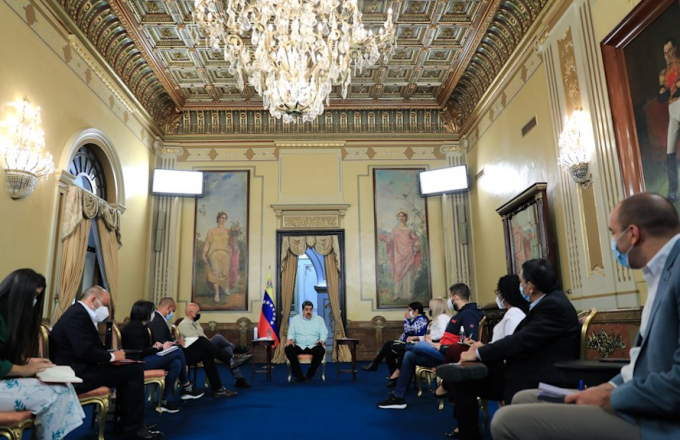 President Maduro highlighted hours before that these conversations are the product of effort, work, dedication, and patience. At the evening meeting, a document was approved specifying the economic demands that will be raised in the new round of the Mexico Talks.

At the end of the first round of the Mexico Talks, President Maduro suggested that delegates emphasize the importance of the nation’s economic recovery for the Mexico City dialogue’s agenda. This includes the return of companies such as Monómeros, CITGO, and other assets belonging to the Venezuelan people, seized by right-wing elements in complicity with foreign governments.

Lines of action
When ratifying the significance of these economic issues for the new phase of the dialogue, Rodríguez recalled that the unilateral coercive measures imposed by Washington on the South American nation have done a great amount of damage to businessmen, workers, housewives, artists, representatives of the healthcare sector, and peasants.

“We have all been affected by the blockade, theft, and by compliance with the illegal sanctions with which the hegemons have tried to subdue the people of Venezuela,” he said.

On the other hand, Rodríguez added that the process that is advancing in Mexico does not necessarily require complete agreement. At the very least, they aspire to reach partial agreements that would allow sufficient confidence to move forward in discussions.

He added that, with all this, a process that takes several months of conversations with sectors of the opposition is materializing, a process which has been fruitful already, with the return to the constitutional route by right-wing elements who had previously chosen a course that was detrimental to the tranquility, civility, and political rights established in the Venezuelan Constitution.

“It is very auspicious that at this time they have decided to participate in the elections for mayors and governors on November 21,” said Jorge Rodríguez upon his arrival in Mexico. “Hopefully that position will be maintained.”

Rodriguez hopeful after first meeting
In the afternoon of this Friday, at the end of the first meeting, Jorge Rodríguez was approached by journalists asking about the meeting. Using the noncommittal language expected from one engaged in these complex and fragile negotiations, he managed to state that “we come here so that all the [Venezuelan] people can benefit from this dialogue. That is why we advancing an agenda that directly affect the lives of Venezuelans, in the economy, in the social sphere, in the pandemic. I believe that this work will bear fruit.”

The second round of talks will last until Monday, September 6, when all the delegations, including the mediators from Norway, will return to their respective bases, after issuing a final press release reporting on the primary achievements from this second round of talks.

Featured image: Venezuelan government delegation arriving to Mexico for participate in the second round of the Mexico Talks. Photo courtesy of Twitter/@jorgepsuv .