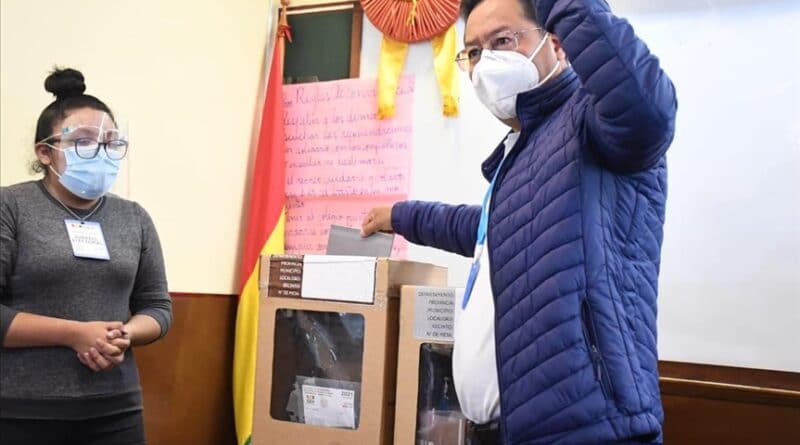 The president of Bolivia refused to participate in an electoral event alongside representatives from the Organization of American States (OAS) due to the “nefarious role” played by the group in the 2019 coup.

On the day of Bolivia’s regional elections, President Arce explained his absence at the official opening ceremony in the Supreme Electoral Tribunal (TSE), stating that neither he nor anyone from his government will participate in an activity in the presence of representatives of OAS—the organization heavily criticized for supporting the 2019 coup against Evo Morales.

TSE recently confirmed the presence of OAS delegates as observers of Bolivia’s elections for various regional authorities of the Andean country.

“While the OAS is present, we are not going to respond to any invitation from the Electoral Tribunal. You know the nefarious role of the OAS in the 2019 election, so they have no credibility,” the head of state commented after casting his vote in the city of La Paz (the administrative capital of Bolivia).

The Bolivian people voted on Sunday to elect some 5,000 governors, assembly members, mayors, councilors, and other local authorities from among 20,000 candidates registered with the TSE. The elected representatives cover 27 regional, 583 departmental, and 4,352 municipal posts. These regional elections are being held after a delay of one year, due to the 2019 coup and the subsequent COVID-19 pandemic.

President Arce considered the importance of these subnational elections for consolidating the recovery of democracy that began with his party’s victory in the general elections held on October 18. “We’re voting not only for our authorities but for the confirmation of the plurinational state,” he said.

Acting as electoral observers for the 2019 presidential elections in Bolivia, the OAS published an ill-advised preliminary audit report in which it stated that the country’s former president, Evo Morales, had not obtained enough votes and was committing an alleged fraud. The OAS claims instigated a series of events culminating in Evo Morales’ resignation at the “request” of the head of the Army and the National Police.

Following the sweeping electoral victory of Arce—candidate of Morales’ Movement for Socialism (MAS)—criticism has increased against the hemispheric body [OAS] and its secretary general [Luis Almagro] regarding its role in the coup. After Morales’ resignation Bolivia entered a period of political crisis for about one year, defined by the repressive rule of the right-wing interim President Jeanine Áñez, who with US backing committed a number of questionable offences.