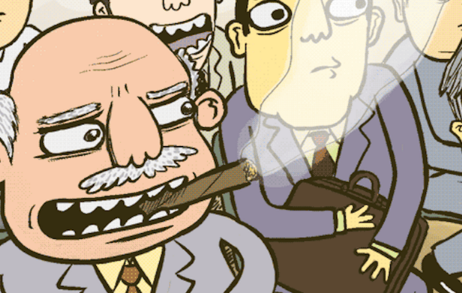 Invariably, in a conversation about environmental destruction, war in the Middle East, or the pandemic, someone eventually asks the question: “Yes, but what’s their endgame?”

Behind this question is the assumption that an elite cabal of capitalist overseers controls everything and foresees the outcome of all their decisions—that they possess an unassailable plan that can never be defeated. Behind this question also lurks capitalist realism, characterized by Zizek and Jameson as the mental state in which “it’s easier to imagine the end of the world than it is to imagine the end of capitalism.”

“We find ourselves at the notorious ‘end of history’ trumpeted by Francis Fukuyama after the fall of the Berlin Wall,” wrote Mark Fisher in Capitalist Realism: Is There No Alternative? “Fukuyama’s thesis that history has climaxed with liberal capitalism may have been widely derided, but it is accepted, even assumed, at the level of the cultural unconscious.”

This mindset is so common that many of us don’t think twice before asking “What’s their endgame?” We believe that in posing the question we’re making a meta-critique of capitalism. The mere formulation of the question supposes that there’s such a thing as organization—a system—a concept that in itself is truly revolutionary for many of us, who don’t even realize that we live within a system, and that alternatives are possible.

The question “What’s their endgame?” is often posed in the context of the pandemic. In this case, the assumption behind the question is that capitalism, if it wanted to, could have reacted better to the pandemic, and could have saved more lives. Therefore, the pseudo-intellect wonders, was there perhaps not a master plan behind letting hundreds of thousands die? Perhaps the US colluded with the leaders of Brazil, Britain, China, Cuba, and the United Nations, and they all agreed on a plan to usher in a police state? The theory falls apart when we accept that various communities had divergent responses to COVID-19. It’s more likely that the agenda behind allowing mass death was the same that capitalists always have: to make as much money as possible with little thought for the consequences.

On the topic of environmental destruction, we aver that billionaires are building spaceships to colonize Mars; that they’ve already planned for the destruction of planet earth and its ecosystems. Whether it’s the singularity, or life on Mars as imagined in books and film, we’ve internalized the idea that the contamination of earth and humanity’s exile into space—or at least an elite fraction of humanity—is actually an ingenious plan devised by the super-intelligent billionaires, not the inevitable result of an economic system that ignores the most basic principles of nature in order to line the pockets of the oligarchy.

Global war? We’re supposed to believe that the imperialist wars in Syria, Afghanistan, or Yemen, are going exactly as planned; that the US withdrew from Iraq in 2011 strategically—the US actually won the war. We’ve internalized the fallacy that Vietnam’s Resistance War Against America went according to US plans; that powers beyond our control act unilaterally on our beings, that we’re not actors in history.

I’m reminded of a comment someone posted on my Facebook wall this week: “if one wishes an answer, there is none, to war and chaos. When it all spills over it becomes a world war, and history repeats itself, over and over.” There are elements of truth to these ideas, which is why they’re so appealing.

“This malaise, the feeling that there is nothing new, is itself nothing new of course,” wrote Fisher.

History repeats itself: an appealing idea
Perhaps the root of this idea is the oft-repeated saying that “those who do not learn from history are doomed to repeat it.” It turns out that this is really an altered version, or a misquote, of the original written by Spanish philosopher Jorge Santayana in 1905: “those who cannot remember the past are condemned to repeat it.”

From this deeply ingrained idea we extrapolate the notion that history repeats itself—but that’s not at all what Santayana meant. Neither of these maxims is meant to teach us that history repeats itself. Santayana’s statement warns us that if we don’t learn from history, we won’t be involved in the making of the future. While there are certainly cyclical elements in both nature and human history, to believe that either nature or history truly repeats itself is simply to bow out of the game—to quit before we’ve even played. A similar logic is at play when we ask “What’s their endgame?”

The reasonable alternative is to recognize that reality is always changing, and will continue to change; to recognize that humans play an active role in creating the future. Our realities are not determined by forces entirely outside of our control. This recognition gives us both strength and optimism.

“For revolutionary hope to come into being, we need to discard determinism,” writes Yanis Iqbal. “Instead of dialectically locating an individual in the interconnected economic, political and cultural systems, institutions and structures, determinism considers him/her to be unilaterally influenced by it. A determinist conception is based on the dichotomous division of existence into an ‘external world’ and ‘human consciousness.’ In this conception, the external world and consciousness are two different components of human existence.”

In truth, humans are not separate from the world around us. It’s self-evident that we’re part of it. We require air, water, and sustenance to live and to think. Conversely, we alter and metabolize the world around us by our existence. The oligarchy and the elite, while they may live in ivory towers, are subject to the same forces of nature as we are, with the same powers and limits of agency. They may have various plans, and diverse strategies, but none of this ensured that their plans worked perfectly in the past, nor will in the future.

Despite its popularity in academia—particularly in philosophy, cultural studies and postmodernism—it’s easy to demonstrate that capitalist realism is incorrect. One only has to imagine other mental states or cultural tropes such as apartheid realism, feudalist realism, or hunter-gatherer realism.

Understanding and analyzing the plans of our opponents or enemies is important. The assumption that we are powerless before them is fallacious and futile.

Often, what lies beneath the question “What’s their endgame?” is conspiracy theory. Yes, many elements of conspiracy theory are certainly true and yes, groupings of like-minded people marshal increased power to guide events. However, blind adherence to conspiracy theory ignores the self-evidence of the greatest conspiracy of all: that we, as humans, all conspire together to create the future.