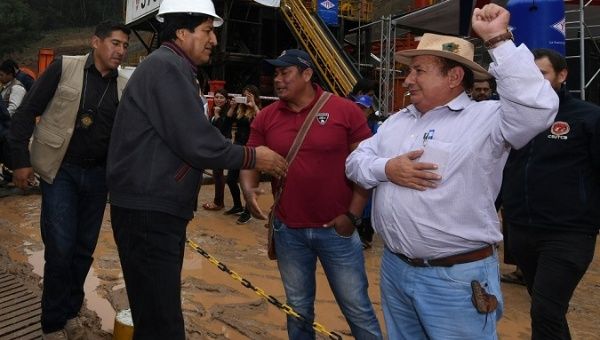 The oil well is the property of the country’s state enterprise Bolivian Fiscal Oil Fields (YPFB).

Bolivian President Evo Morales confirmed on Friday that a new natural gas reserve was found by the country’s state enterprise Bolivian Fiscal Oil Fields (YPFB). Since the country’s natural resources, such as gas, have been nationalized, profits from the new gas reserve will remain in the country.

The new gas reserves were found in the municipality of Carapari, located in the southern department of Tarija- home to much of Bolivia’s natural gas and oil reserves. Hydrocarbons Minister Luis Alberto Sanchez called it a “sea of gas.”

The well is the deepest in South America, standing at 7,640 metres deep. The investment for the drilling came to US$133 millon and was provided by the YPFB and some private investors. As the oil well is property of YPFB, a nationalized company, the profits are state revenue.

The South American country is becoming a leading exporter of gas. Bolivia used to be a net importer of refined gas, used for cooking and heating. However, since nationalization in 2006, the exploratory and productive capacity of YPFB has increased and the country now exports both natural and refined gas to all of its neighbors.

Recently, it was announced that the YPFB will expand and start providing contained gas to much of Southern Peru at low prices. Furthermore, a new pipeline is expected to be built between Bolivia and Paraguay, a country that now imports 95% of its gas from Bolivia. These expansions are due to the industrialization of Bolivia’s natural resources.

Celebrating the new discovery on friday, Morales highlighted the importance of the nationalization of natural resources.

“This economic model gave us important results not only in the hydrocarbon issue, but also in other sectors. Despite the price of oil, Bolivia remains in first place for economic growth in South America,” the president said.

On thursday, he contrasted the current policy, with that of the previous neoliberal administrations. He argued that “policies set by the North American empire were only aimed at the permanent looting of (Bolivia’s) natural resources.”