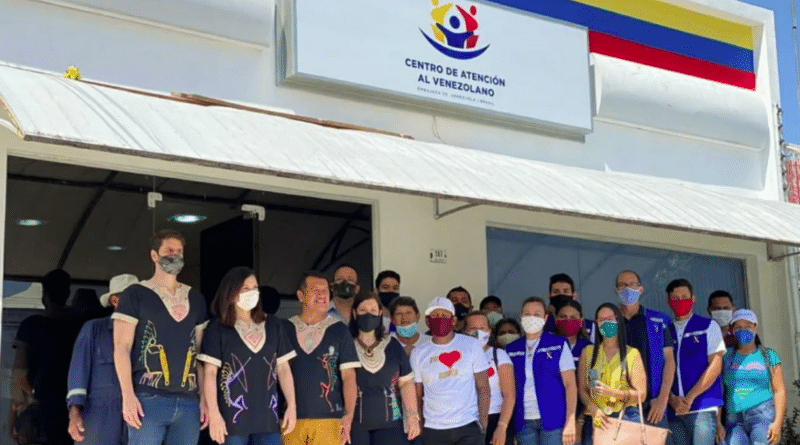 The Foreign Affairs Minister of the Republic of Venezuela, Jorge Arreaza, published a communique this Sunday denouncing how the government of Jair Bolsonaro has led crimes of consular fraud by allowing false Venezuelan officials to issue documentation to fellow Venezuelan citizens residing in Brazil.

The head of the Ministry of Foreign Affairs detailed how the government of Brazil has consented to this fraud: “With the unusual consent of the Brazilian government, some alleged meetings of consular attended by fictitious authorities without endorsement or any contact with Venezuelan state institutions, who lack the authority to issue or alter legal documents.”

Likewise, it warns all Venezuelans who are in Brazil not to be carried away by fraudulent consular calls made by people who seek to usurp the legitimate service offered in this instance by the neighboring country.

The virtual ambassador of the self-proclaimed Juan Guaidó, María Teresa Belandria, published photos on her Twitter account on October 3rd delivering certificates of documents, without any national endorsement from the Venezuelan Foreign Affairs Ministry.

This Venezuelan agency has been emphatic in highlighting the invalidity of this documentation, outside the endorsement of official agencies, which has the legal authority for its issuance: “The documents issued through this mechanism will be null and void and their alteration, as well as falsification of official seals, are classified as a crime, not only in the Venezuelan legal system, but throughout the world, and carry penalties.”

Below is the official translation of the communique:

Venezuela denounces fraud and usurpation of consular activities in Brazil
The Bolivarian Republic of Venezuela addresses the international community and the Venezuelan People on the occasion to refer to the fraudulent activities of alleged consular nature, carried out by persons who intend to usurp the legitimate Venezuelan consular service.

On this occasion, reference is made to the information recently disclosed in the Federative Republic of Brazil, which announces, with the unusual consent of the Brazilian government, some supposed consular attention days in charge of fictitious authorities, without any endorsement or contact with the institutions of the Venezuelan State, which lack the authority to issue or alter legal documents.

Therefore, it is necessary to warn Venezuelan citizens who, in good faith, resort to the use of these fraudulent services abroad, that the documents issued through this mechanism will be null and void and that their alteration, as well as the falsification of official seals, are criminalized, not only in the Venezuelan legal system, but also worldwide and carry penalties, both for those who facilitate the falsifications and for those who make use of such altered documents or falsified seals.