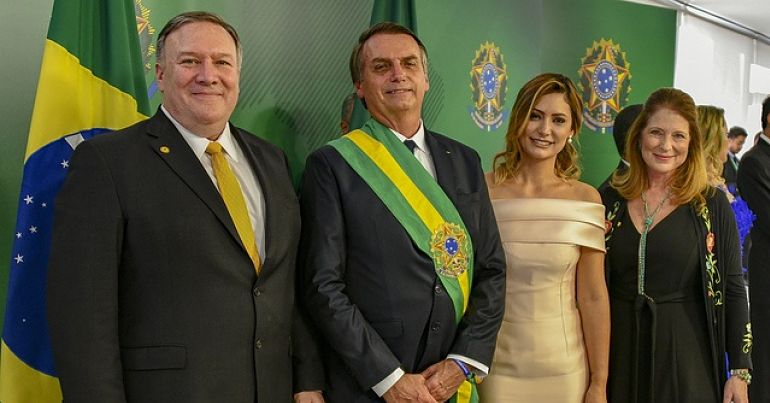 Brazil’s far-right leader Jair Bolsonaro is pushing Latin America’s largest nation to the brink of catastrophe. In a country of over 210 million people, Bolsonaro’s inaction and outright denial of the real threat that the coronavirus (Covid-19) pandemic presents is risking the premature and unnecessary death of hundreds of thousands of people. With the stakes so high, Bolsonaro is facing unprecedented opposition from millions of Brazilians as pressure builds for him to resign as president.

Bolsonaro is not the maverick outrider that the mainstream media is making him out to be. His extremely dismissive attitude to the coronavirus, which he persistently describes as a “little flu“, emulates Donald Trump’s repeated downplaying of the pandemic.

Bolsonaro’s approach is essentially to allow coronavirus to spread uncontrollably through the population, taking no serious measures to prevent it. This approach is very similar to the “herd immunity” strategy initially advocated by Boris Johnson and the British government on 12 March, which was only modified after a public outcry. The UK’s modifications, however, have proved too small and come too late to prevent the catastrophe which is now unfolding. At the time of writing, around 3,000 people have died from coronavirus in the UK, and the number of new daily cases continues to rise. Data from the Financial Times suggests that the UK and US responses to the coronavirus have been the worst in the world, with the death toll accelerating on a steeper trajectory than Italy and Spain.

There is a common theme to the global right wing’s response to the coronavirus pandemic: prioritise saving the economy (i.e. private profits) at the expense of saving people’s lives. But Bolsonaro’s stance and rhetoric represent the most extreme and crude version of this line. In countries where such an approach is being pursued, it has caused dangerous delays in the governments’ implementation of measures that are necessary to save lives. And when measures are taken, they’re insufficient half-measures – such as partial lockdowns or a failure to carry out widespread, timely testing – rather than the comprehensive approach set out by the World Health Organization (WHO).

Ultimately, the approach of Trump, Johnson, and Bolsonaro is failing to contain the virus; and this threatens the lives of hundreds of thousands of people. At the time of writing, the US is currently the epicentre of the global pandemic with around 240,000 cases. With Bolsonaro at the helm, Brazil could be on course for a similar catastrophe within the next few weeks.

Over the past month, Bolsonaro has been relentlessly downplaying the threat that the coronavirus poses. His comments on 10 March, when he suggested coronavirus was a media “fantasy” (or later, a “trick“), have not aged well. On that day, the WHO reported that there were over 113,000 confirmed coronavirus cases worldwide. Now, there are over a million cases globally. The number of cases in Brazil has dramatically increased from 25 confirmed cases on 10 March to around 8,000 on 2 April. In the week upto 1 April, the number of cases in Brazil almost doubled. About 300 people have now died.

Experts in Brazil, however, believe that the government’s official statistics on the coronavirus grossly underestimate the reality of the situation. Scientists at the Oswaldo Cruz Foundation (Fiocruz) in Rio de Janeiro – a world-leading public health institution – estimate that the real number of cases is ten times higher than official figures due to a lack of testing.

The rapid spread of coronavirus in Brazil, however, has not convinced Bolsonaro to contain the disease. On 29 March, he defiantly stated:

The virus is there. We need to face it like a man, dammit. We will all die someday.

Trying to smash up lockdowns

Governors in a number Brazilian states have taken the decision to implement lockdowns in major cities by closing shopping malls, schools, public buildings, and sporting events, including in Rio de Janeiro and Sao Paulo. But Bolsonaro has savagely attacked these governors – a number of whom were former allies. He has denounced them as “job killers“, determined to wreck the economy. Bolsonaro has also actively encouraged Brazilians to break the quarantines imposed in these cities.

Despite suspicions that Bolsonaro was himself infected with the coronavirus, he has been trying to lead Brazilians onto the streets by very publicly disobeying social distancing guidelines.

Bolsonaro’s callous approach is facing mounting resistance within Brazil, though. 64% of Brazilians reject his handling of crisis, and 45% want him impeached. ‘Pots and pans’ protests, meanwhile, have exploded across Brazil every night for the past two weeks as people in self-isolation have expressed their opposition to Bolsonaro from their balconies and windows in major cities nationwide.

The massive crisis has destabilised Bolsonaro’s own government after he publicly clashed with his own health minister. Meanwhile, a Brazilian Supreme Court justice has reported to the attorney general that Bolsonaro has committed a crime and should therefore be removed from office for 180 days for endangering the Brazilian people by attempting to end the “lockdowns”.

Politicians from across the political spectrum are also taking measures to protect people in spite of Bolsonaro’s defiant opposition. Nine governors from the Northeast of Brazil, for example, have issued a letter to Bolsonaro expressing their outrage at what they regard as his “genuine attack on life” and calling for Brazil’s coronavirus response to be guided by science and in line with WHO advice. Progressive leaders in Brazil from a variety political parties, meanwhile, have united to demand Bolsonaro’s resignation. In a fiery joint statement titled Brazil cannot be destroyed by Bolsonaro, they state:

Bolsonaro is the biggest obstacle to making urgent decisions to reduce the spread of contagion, save lives and guarantee the income of families, jobs and companies. …

The prospect of coronavirus spreading uncontrollably through Brazil’s favelas (slums) is truly harrowing. A combination of poor infrastructure, a lack of clean running water, and the overcrowded conditions in these areas provide a fertile environment for coronavirus to spread quickly and potentially cause a humanitarian disaster. Every day that Bolsonaro refuses to implement the preventative measures needed to contain the virus is risking catastrophe and putting the lives of hundreds of thousands of people in danger. In this life and death situation, the people of Brazil urgently need international solidarity as they resist this highly dangerous approach.