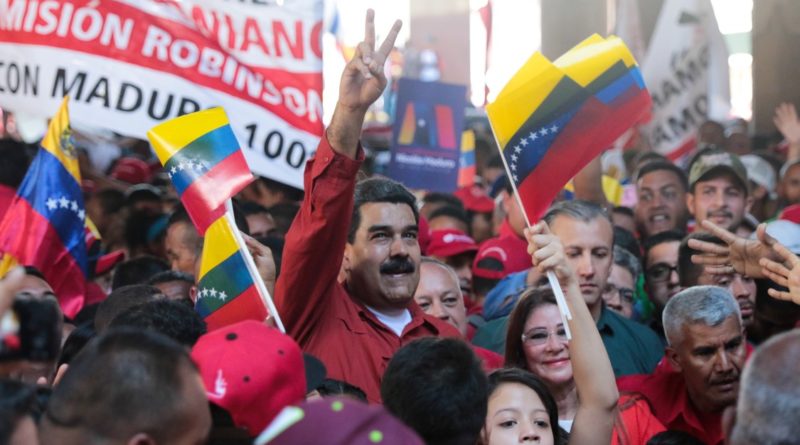 There was never any doubt. However, February 4, 2019 in Caracas, constituted an opportunity for me to briefly shake hands with Nicolás Maduro, to fleetingly gaze into the former bus driver’s humble eyes, and then listen to him address a small, intimate foreign delegation. In this unique setting, one’s political and personal appreciation skyrocketed to a new qualitative level. Today, glancing (and cringing in anger it must be admitted) at the false U.S. charges against Maduro, preferring not to transcribe the ugly words on paper so as to maintain the purity of the written sentiment already almost impossible to put into words, the accusations are patently unbelievable.
Analyzing the phoney charges, not from the legal/judicial point of view, but rather from a moral/political optic, a person characterized by these false accusations would be one who is completely individualist. It would concern a person guided and consumed by the unique and exclusive goal of serving oneself by amassing a fortune. The pursuit of an egotistical lifestyle driven by the goal of accumulating the profits arising from the criminal activities being alleged constitutes the epitome of the values at the very base of capitalism and imperialism. Part of that moribund system with no future, now consumed by its own individualism, indicating to what extent such selfishness may even lead to self-destruction, and have no qualms at all of bringing down others in its wake, as we saw in World War II.

However, the Nicolás Maduro I heard speak on February 4, 2019, from a very close vantage point, personified the very opposite of individualism. The encounter took place only a few weeks after the first coup attempt led by the U.S. and the Lima group. He spoke to us for about two hours. His complete devotion to the cause of the Bolivarian Revolution, Venezuelan sovereignty, the legacy and teachings of Commander Hugo Chávez was unmistakable. The audience was riveted, and as far as the author of these lines is concerned, it could only be compared to the magnetic attraction of a Fidel Castro, laced as it was with Fidel’s style of sincerity and coherent logic, and an appropriate mix of seriousness and humor.

RELATED CONTENT: Network in Defense of Humanity Against the Recent Threats and Unfounded Accusations by the US Against the Government and People of Venezuela (Statement)

As far as the themes Maduro touched upon, one that stood out that day and which takes on even more importance in view of today’s false accusations, was Venezuela’s civic-military union. This subject takes on further significance now because it is central to the success of Maduro’s stance since January 2019. It has clearly frustrated the U.S. to the point of taking this latest desperate step. Returning to the Caracas meeting, Maduro took the audience through what seemed to be every step of the meetings he had held across the country, and an on-the-spot check-up of all sectors of the armed forces, as well as with the militia and local social organizations. It was as if we were there with him. He embodied the notion of being just one more soldier among the millions of Venezuelans ready to give his life to defend their cause.

Ready to sacrifice his life? Yes, this is the impression he left. Only several months later there was in fact a U.S.-inspired assassination attempt against him. However, he survived and bounced back to work. In fact, since January 2019 and leading up to March 26, 2020, when a bounty was placed on his head, just like in the old Wild West, there has been an unprecedented, non-stop media campaign, attempting to conduct a political and psychological war against Maduro, coupled with further coup attempts.

History has catapulted Maduro into a unique position. He has become, so to speak, a “martyr” in his own lifetime, such is his heroic resistance to the U.S.-led alliance aiming to smash him and the Bolivarian Revolution. Thus, when Cuban colleague Iroel Sánchez “nominated” Maduro as “Man of the Year” for 2019, irrespective of Time magazine preferences, it rang a bell. Maduro’s ability to seemingly enjoy the “cat’s nine lives” throughout 2019 “endorsed” this nomination. From January 2019 to March 26, 2020, how many times was he supposed to have been eliminated?

The evolution of this incessant U.S.-led offensive against Maduro, and the heroic and historical resistance, served to further embody the notion that Maduro is completely and selflessly devoted to the common good of Venezuela. It seems evident that Maduro’s personal conviction is that he would die only with a rifle in his hand defending Venezuela, if it would ever come to that. This altruistic quality is diametrically opposed to the selfish individualism embedded in capitalism, which is the basis of the type of charges falsely imputed to Maduro.

Can anyone seriously imagine that someone completely devoted to the collective well-being of his people, including making the ultimate sacrifice if necessary, would in any way be involved in the alleged underground illicit activities?

Does this evaluation take the issue too far by personalizing Maduro? It is obviously just to assert that one should oppose the U.S. attempts to overthrow Maduro by any means necessary, irrespective of what one thinks of Maduro. However, on March 26, 2020, the U.S., by putting a bounty on his head, is forcing world public opinion to take a stand on Maduro. This is a good situation because it forces the issue of Maduro to emerge in public, front and center. The historical evolution since Maduro was first elected president in 2013, demonstrates that the leading antidote to the U.S. goal of regime change for Venezuela, is President Nicolás Maduro himself.

The author of these lines has never been a great fan of those who claim to defend the Bolivarian Revolution and Venezuela’s right to self-determination and sovereignty, while smuggling in establishment buzzword narratives of “authoritarian government” and “dubious elections” in reference to Maduro.” Of course, they have a right to their opinion and their verbal support for Venezuela’s right to self-determination is most welcome. However, by providing credibility to the U.S. narrative, does this not do more harm than good, providing as it does a “respectable” cover for the U.S. narrative as a pretext foreign intervention? After all, in the indictment, the very first sentence describes “the former Maduro regime.”

Whether one likes it or not, especially since the bounty has been put on his head, the leadership which has maintained Venezuela’s sovereignty is definitively embodied in the person of Maduro. He also allows Venezuela to go to any negotiating table from a position of strength, rather than on its knees. As far as progressives are concerned, is there a middle ground between Maduro on the one hand and the defence of Venezuela’s right to self-determination on the other?

Why not just tell the truth, turn the tables on the U.S. and state that the alleged crimes against Maduro are exclusive to the U.S. and its capitalist system, from which the Bolivarian Revolution and its present leader, Nicolás Maduro, are immune? History has proven this. As the saying goes, the best defence is an offence.

It is time for Canadians to once again go on the offensive, even in the current difficult conditions caused by Covid-19. After all, it is obvious that the Trump administration is sadistically counting on the spread of the virus in Venezuela and the fact that this Latin America country is fully dedicating its resources, already hit by crippling U.S. sanctions, to contain the deadly virus and save lives, sparing no cost.

Venezuela and its president are simultaneously engaged in a war on two fronts, against the virus and now the escalation of the March 26 indictment by the U.S. As Canadians, we have to rise up to this historic situation with its impact for Venezuela, Latin America and indeed the world.