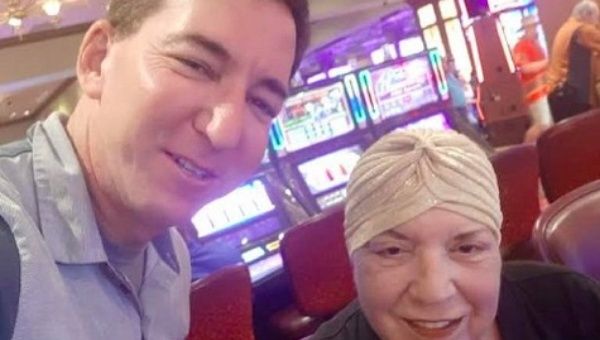 People to Arlene Greenwald’s Facebook page to attack her, saying she wasn’t suffering from stage 4 cancer following a similar statement by far-right blogger.

Arlene Greenwald, the mother of journalist and author Glenn Greenwald, was attacked via social media Thursday by supporters of Brazil’s president Jair Bolsonaro.

A blogger named Oswaldo Eustaquio questioned the terminal cancer Glenn’s mother is suffering from and wrote on his Twitter account that Glenn lied about his mother’s health situation. Eustaquio concluded she was in good health based of her Facebook posts.

“Glenn lied about his mother’s state of health to get emergency visas [to the United States]. He said she is terminally ill while she is having fun on social media. Well, I hope she always feel well, but this lie hurts the families of cancer victims,” the blogger wrote.

Arlene responded to the attacks in a letter she published on social media.

“For those of you who think they have a right to know about my private health issues, yes I do have Stage 4 cancer. Ask yourself if anyone would lie about having cancer,” she said, adding that she was very proud of her two children to whom she tried to teach to “have the courage to do what they think is right.

“Nothing has made me prouder watching Glenn’s bravery over the last few years,” her letter read.

Glenn Greenwald reacted strongly and accurately to Eustaquio’s post, calling it “total garbage,” adding that even people who are dying of cancer still have the ability to post on social media.

“You must be the sickest and most disgusting person on the planet to invent that my mother is not terminally ill,” Glenn responded, saying at the same time that he felt very proud of his mother’s gracious response to the attacks.

Eustaquio has a relatively large following and blogged July 30 that Greenwald should be imprisoned for “participating in Brazil’s biggest virtual crime,” for publishing the Moro leaks last month.

Sometimes the ugliest and most grotesque acts produce grace, goodness, and inspiring strength of character. I am sorry for what was done to my mother because of my work, but I am so proud of how she responded. She is the one who taught me about courage and conscience.

The journalist, co-founder of the online news outlet, The Intercept, was harshly criticized on several occasions over the last weeks by Bolsonaro, after he disclosed incriminating conversations involving former federal judge and current Justice Minister Sergio Moro. The conversations show that Moro overstepped his power and plotted with the state prosecutors to imprison former president Luiz Inacio Lula da Silva in 2018, which eventually preventing his re-running for president, opening the way for far-right Bolsonaro’s electoral victory.

Bolsonaro went as far as to say that Glenn Greenwald “may be imprisoned” for the information he and co-authors of the June expose, published.

The journalist’s mother lives in Miami, U.S. and is currently facing terminal cancer. Greenwald recently asked the U.S. consulate for emergency visas for his two children, born in Brazil and adopted by Greenwald and his partner, David Mirando, so they could meet their grandmother as soon as possible.

After initially denying the request, the consulate finally provided the visas.