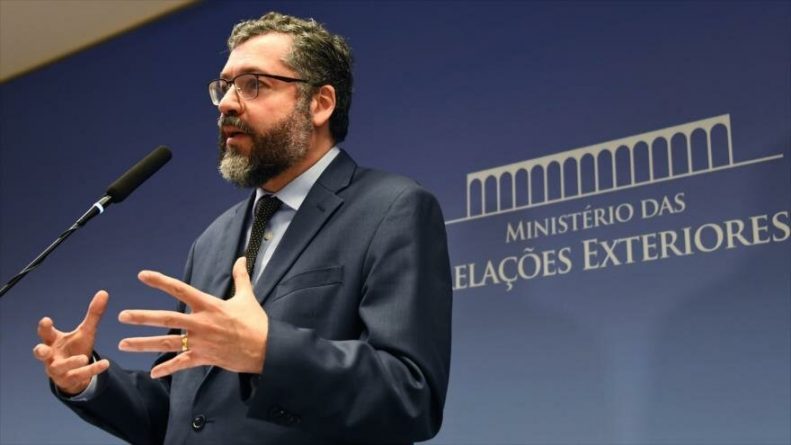 The foreign minister of Brazil, Ernesto Araújo, says that the Russian military must leave Venezuela, if its purpose is to maintain Nicolás Maduro in the government.

In a telephone interview with the British news agency Reuters , Araújo has said he expects Russia to recognize that supporting Maduro will only deepen the collapse of Venezuela’s economy and society, and that the only way out of the crisis is to hold elections under an interim government, led by the opposition Juan Guaidó.

“If his idea is to keep Maduro in power longer, that means more people will die of hunger and flee the country (…) Anything that contributes to the continuation of the suffering of the Venezuelan people must be eliminated,” he said. Minister.

In the opinion of the head of the Brazilian Diplomacy, the presence of Russian soldiers in Venezuela is a sign of Maduro’s weakness. “If he needs to bring troops from abroad, it is clear that his own Armed Forces are not totally with him,” he said.

If his idea is to keep Maduro in power longer, that means more people will die of hunger and flee the country (…) Anything that contributes to the continuation of the suffering of the Venezuelan people must be eliminated, “said the foreign minister. Brazil, Ernesto Araújo, referring to the sending of soldiers by Russia to Venezuela.

RELATED CONTENT: US can use Curacao for Intervention in Venezuela, Warns Diplomat

The statements of the Brazilian foreign minister come after the demands expressed by the US president, Donald Trump, who insisted that he would take Russia and the Russian forces out of Venezuela “by any means”, declaring that “all options are open”.

In response, the spokeswoman of the Russian Ministry of Foreign Affairs, Maria Zajarova, has declared this Thursday that Russia and Venezuela are not US province, therefore, Washington has no right to tell them how to develop their diplomatic relations.

On Saturday, a group of Russian military arrived in the Venezuelan capital, Caracas, to participate in consultations with the country’s officials on issues of cooperation in the defense industry. Moscow has ratified its support for the government in Caracas, betting to tighten the bonds between both countries and to challenge, in this way, the USA.