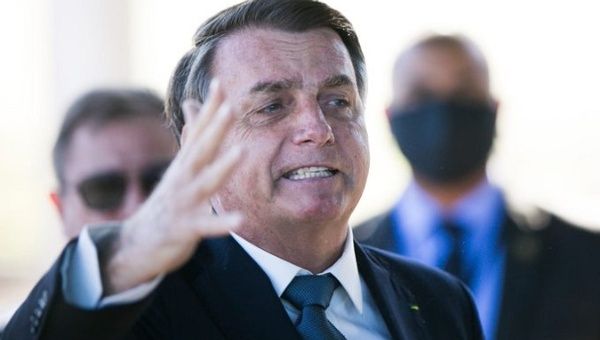 The press asked Brazil’s President about a change of officers that could be related to an attempt to obstruct justice.

Brazil’s President Jair Bolsonaro lost his head on Tuesday morning and told reporters to shut up after they asked him about his interference in the Federal Police, of which he was accused by Sergio Moro, his former Justice Minister and political ally.

As the far-right politician left the government headquarters in Brasilia, he protested to journalists for being part of a “rogue and lying press.”

According to local outlets, the change in the police leadership would be related to an attempt to obstruct an investigation supervised by the Supreme Court after the complaint made by the former Justice Minister.

When journalists asked Bolsonaro about this issue, the former captain reacted violently by ordering them to close their mouths on at least three occasions.

“It is roguery. Shut up, ask nothing… scoundrel, liar. You, from the media, be ashamed… You just post rogueries,” Bolsonaro shouted.

As the philosopher said, history repeats itself, the first as tragedy, then as farce. The press had to shut up during the dictatorship. That order comes back with Bolsonaro’s even colder tones. It is time to act before 2020 definitely repeats 1964. Bolsonaro, Step down! The meme reads, “If you censor a verse, I’ll write another one.” In the images, General Newton Cruz orders a journalist to shut up in Dec. 1983 when the dictatorship was nearing its end.

His request was supported by his followers, who also verbally assaulted journalists. These attacks, however, were not unpublished.

On Sunday two photographers were beaten while covering a rally in which Bolsonaro asked his followers to support him to close the Supreme Court and Parliament, an action that would be equivalent to the establishment of a dictatorship in Brazil.

The “Bolsonaristas” also demanded that the health measures to restrict the movement of people, which were adopted by governors and mayors, be eliminated although Brazil registers over 7,300 deaths and 108,620 infected COVID-19.

The attacks and insults against the press were then condemned even by the Defense Ministry, which stated that “all attacks on press professionals are unacceptable”.

Besides ordering an investigation on Sunday’s attack, the Attorney General’s Office is currently carrying out investigations that could compel Bolsonaro to answer for various crimes, one of which is obstruction of justice