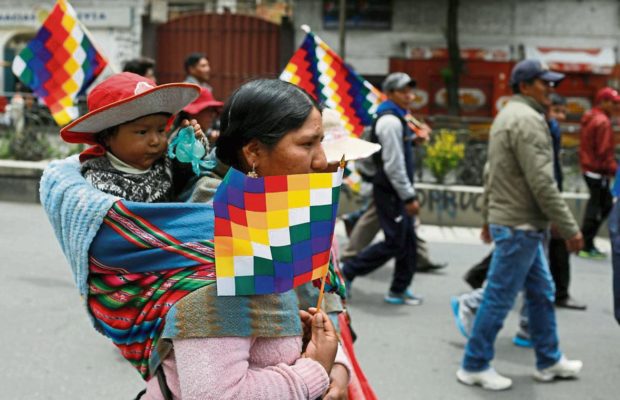 How does the left stand a chance of winning representatives in Bolivia’s bourgeois-democratic elections?

Is an efficient and effective electoral strategy, regardless of the relationship of forces between the dominant and subordinate classes, what is predominant, even unique, for a leftist candidate to be able to win over a high percentage of the population and crown himself as a winning formula? Is it a general political strategy, with its political-electoral correlates, that builds “from below” a favorable relationship of forces in the social struggle, and then that translates into votes greater than those received by right-wing candidates, leading to a political-electoral victory?

It is clear that much thought can be given to each of those questions. Other questions can even be incorporated in the same direction and make the subject even more complex. However, at the risk of appearing too simple, let’s go over some criteria.

The first is that the ways of doing electoral politics depend on the general political situation of the time. There is an intimate relationship between the political characteristics of a certain general historical period and the characteristics of a specific electoral situation. A correct electoral strategy that makes abstraction of the political characteristics of the period and the conjuncture, no matter how seductive it is presented before the eyes and ears of the people, will not mechanically give the expected victor. On the contrary, an electoral strategy based on the people as a social force with an effective territorial presence will be capable of seducing and attracting various fractions of the petty bourgeoisie and other backward sectors of the popular camp to lean towards a leftist candidate.

Second, it is true that the conditions and tools existing in this second decade of the 21st century are different, even radically different, from the conditions and tools that the left developed and used to win electoral victories, first, and install governments of its ideological-political court at the end of the 20th century and the beginning of the 21st century, later. There is no doubt that the role of the media and social networks – as ideological state apparatuses – has an increasingly greater degree of influence in the configuration of electoral results, but whether or not it is predominant depends on the type of social formation, the nature of the class confrontation at the time, and the nature of the political strategies of the actors.

But not even the first and second criteria (forms of electoral participation, on the one hand, and conditions and tools, on the other), modify the main aspect of representative democracy which, based on the fetish of “one citizen, one vote”, is generally structured to ensure the reproduction of the capitalist type of state in the long term. Except for a certain relative autonomy of the State from its dominant classes, in moments of general crisis, the left can take over the government, although previously building from “below” a relationship of favorable social and political forces.

Based on these two considerations, it is good to point out that, as a general rule, the left has been the winner of electoral competitions when its electoral strategy has succeeded in establishing or expressing the trend of social availability of the subordinate classes. In other words, to build and condense through them a present state of mind and subjectivity of a social majority that is unwilling, for various reasons, with the government of the moment, and that is inclined to change through an option would answer the current state of affairs. It is when the general crisis or even the indisposition with the government of the moment is made to lean to the side of a popular project. In other words, it is not only the candidate’s attributes that win over most voters but, above all, when that candidate or party synthesizes the “common sense” of what the people want and what they are fighting for at that moment.

However, this “common sense” does not arise spontaneously, even more so when the majority of the state system (repressive apparatus and ideological state apparatus) is against a leftist candidacy. Rather, it is the result of a patient and skillful construction of relations of force favorable to change. This requires a conscious leadership. It is when, without abandoning modern techniques of inducing people to vote, the fragmented social tissues are gradually being articulated into a single large, strong, and vigorous fabric. The right-wing options have, in an otherwise always costly electoral marketing campaign, the predominant form of winning an election, since the whole of the state apparatus (repressive and ideological) works for its benefit. But the left, even if it is reformist, is obliged to find in the organized strength of the people the main source of its strategy, its tactics and its tools of victory. Moreover, even if the left obtained an electoral victory as a result of a high level of rejection by the population of the parties of the right, due to an unprecedented generalized crisis (ideological crisis of the classes and fractions of the block in power), its degree of stability and the possibilities of deepening its governmental measures will be very limited to face the medium and long term challenges if it does not count on the organized people as a social force.

Does that mean that the left should abandon the use of modern techniques, such as social networks, to face an electoral competition? No, it does not mean that. The progressive and leftist forces should use it to the fullest, but they should be convinced and not fall into “self-deception” claiming that their hypothetical victory was due to other, larger causes. Only the naive or those who are unfamiliar with the laws of political operation are prone to be deceived by certain technicians or tawdry electoral advisors who assume the victory of a leftist candidate on his “correctness”. In fact, a measurement of the level of impact of the battle on social networks will show that the right-wing alternatives are the biggest beneficiaries. The territorial work, the grassroots work, to organize the people and prepare them for a victorious battle that will translate into a vote will never be replaced by the forms of political incidence “from above”. These techniques compliment, yes, but do not replace the conscience and organization made material force.

For that, perhaps it is good to differentiate, as René Zavaleta did, between democracy as a mere aggregation of votes and democracy as self-determination. The sum of votes in representative democracy can give the government, but not lay the foundations for the construction of a power different from the existing one. This implies that a triumph within representative democracy for the right is in its condition of possibility since it does not alter in any way the existing power relations. But for the left, it is insufficient since it is supposed to want the construction of a power different from the capitalist one. For the left to triumph in elections of representative democracy, it must first constitute itself as the leadership of society, and this is only possible when the people become historical subjects who install their “common sense” as predominant over others.

In short, it is not “from above” that the left wins elections with the sole use of modern advocacy techniques, but, above all, with the ability to constitute itself “from below” as a political reference and as part of the historical subject. The left wins elections not only because of the charisma of a candidate, which is important but insufficient but also because of the benefit it derives from that space within representative democracy, which is not its own, to build itself as a power (hegemony translated into political practice) before becoming a government. These are the lessons of history and this is the challenge of the present time.