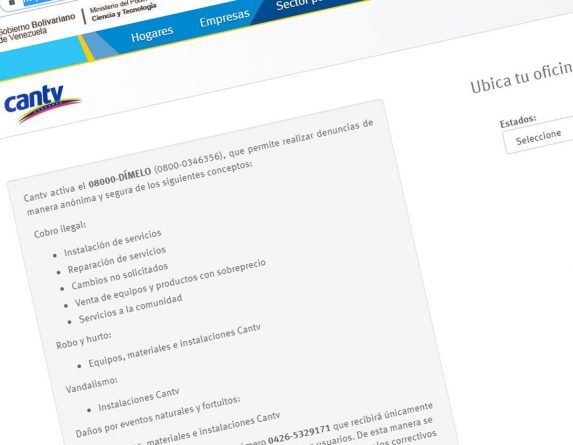 The National Telephone Company of Venezuela (Cantv) reported on the recent activation of a new service through WhatsApp (0426-5329171) to report illegal charges for installation or repair of services, theft of materials, and sale of equipment with surcharge.

It’s well known that CANTV, the main telecommunication corporation in Venezuela, nationalized by President Chavez in 2005, currently is experiencing severe service problems, with vast areas in important cities without internet and telephony services. Orinoco Tribune is affected by this reality because the lack of internet and telephony since the end of December 2018 has forced us to do our work using expensive cellular data networks.

The new complaint mechanism was made viral by the Venezuelan Chavista influencer Luigino Bracci who posted it on his twitter account on May the 24th.

This was outlined by the national company on its web portal, in which it explained that damage caused by natural and unfortuitous events, unsolicited changes, as well as other aspects related to service in the communities,will also be reported along the same route.

“In this way, a co-responsibility is established that will allow the company to apply the necessary corrective measures that affect a better provision of the service,” says the text.

President Maduro has raised the issue of the urgent need of improvement in the quality of service providers in Venezuela, but Cantv has not translated this into effective and noticeable changes.