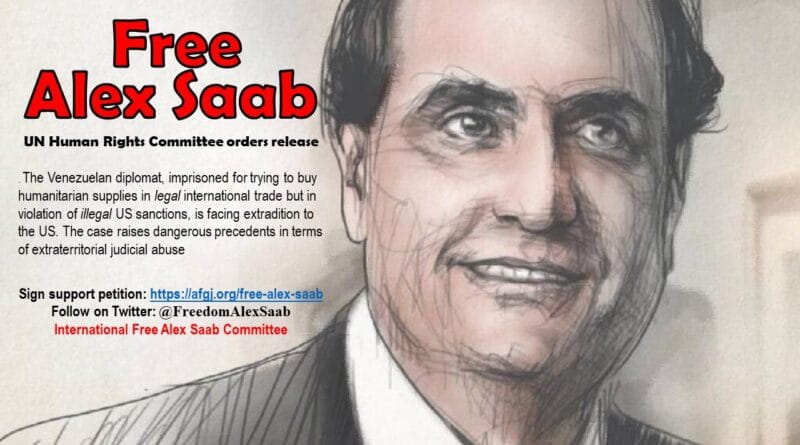 The president of Cape Verde, Jorge Carlos Fonseca, decided to turn a blind eye to the international clamor and ignore the request made on June 8 by the Human Rights Committee of the United Nations (UN) to suspend the extradition process that the United States that is carried out against the Venezuelan diplomat Alex Saab, who has been illegally detained in Cape Verde since June 12, 2020.

According to a review published by the Cape Verdean news outlet Noticias do Norte, President Jorge Carlos Fonseca said that “only the Constitutional Court (TC) has autonomous constitutional jurisdiction to decide on the case,” in an attempt to justify his complacent position on the case.

The agencies confirmed that the Head of State of Cape Verde Jorge Carlos Fonseca said that the justice system of that country will enforce, or not, the recommendations of the United Nations Human Rights Committee on the process of the alternate permanent representative of Venezuela in the African Union, Alex Saab.

Fonseca argued that “for the moment, the process is in the Constitutional Court, which is an autonomous jurisdiction. That is why people have to understand, and I believe that everyone understands, that there is no one involved in the process who does not know that neither the President of the Republic, nor the Prime Minister, nor the Minister of Justice can intervene or suspend anything in a process that is being deliberated in the court.”

In general, some media recognized that the president of Cape Verde decided to wash his hands of Alex Saab’s case, using the apparent autonomy of the Constitutional Court as a mask, allowing the violation of due process in international matters that prevents the correct application of the law.

Previously, the Barlavento Court of Appeal had ruled twice on the extradition of the diplomat. His detention, however, was denounced by Venezuela as arbitrary and a “violation of international law and practices.”

On March 26, 2021, the Telesur website reported that prosecutors from Geneva, Switzerland closed their investigation of Venezuelan diplomat Alex Saab, concluding that the evidence was insufficient to bring formal charges against Saab.

According to Telesur, the Geneva prosecutor weighed the information from the Union of Swiss Banks (UBS) which showed movements between accounts in banks only in Switzerland, and stated that “as it is, there is no further evidence to continue the investigation for the alleged charge of money laundering and the Swiss Public Ministry will move to suspend the criminal proceedings.”

A cursory glance at the details is sufficient to conclude that the United States, within the framework of its economic harassment campaign against Venezuela, has accused Saab of being suspected of alleged illegal commercial contracts and money laundering, without legal grounds or legal power to reach a conviction.

Bishop Filipe Teixeira, currently heading a humanitarian delegation in Cape Verde, responded to the request of the Human Rights Committee of the United Nations. He referred to its statement as “an important decision,” and believe that it would provide “another reason for the Constitutional Court in Cape Verde to hopefully make the right decision, so that diplomat Alex Saab is not extradited to the United States of America.”

“Secondly, it will give him the opportunity to have independent doctors come visit him, for his cancer, and to see where he is at, as he has been deprived of medical care for one year in the Republic of Cape Verde,” Bishop Teixeira added.

Teixeira, a respected religious leader serving the largest Cape Verdean community in the United States, in Boston, told the Telesur channel on June 8 that “Alex Saab is not in good condition, as anybody with a cancer diagnosis needs to see a doctor every so often, and being deprived of medical care is a bad sign… We are on the island of Sal, we tried to go visit him but we were apprehended by police officers and military with machine guns. We confronted them but they would not allow us to go.”

Venezuela, as evidenced on the official social media accounts of the Foreign Minister, Jorge Arreaza, had welcomed the decision of the Human Rights Committee of the United Nations to request the Republic of Cape Verde to adopt a set of measures to guarantee the human rights of Ambassador Alex Saab.

Through a statement published on Twitter, the diplomat reiterated the call to “put an end to the illegal detention” of the Venezuelan diplomat and to initiate “a constructive dialogue on this matter on the basis of full respect for human rights and international law.”

In this sense, in strict adherence to international law and within the framework of friendship and respectful relations, Venezuela has reiterated the call to the Cape Verdean State to respect due process and release Alex Saab, facilitating his return and protecting his basic human rights.

Featured image: #FreeAlexSaab poster by Task Force in the Americas.