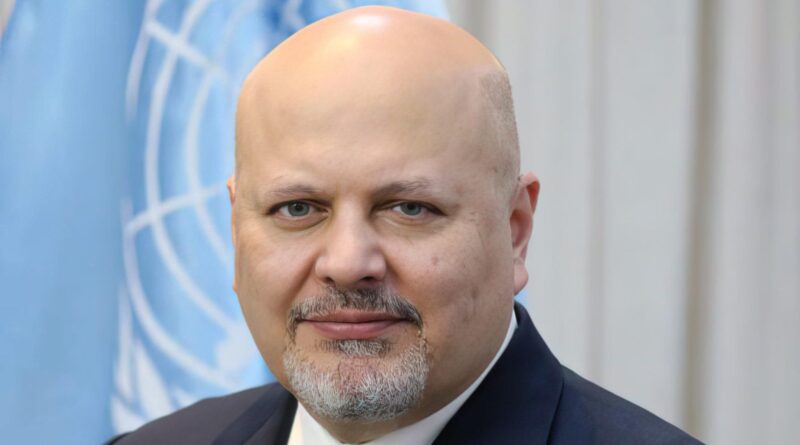 British lawyer Karim Khan took over the Office of the Prosecutor of the International Criminal Court (ICC) on Wednesday, June 16, inheriting a long list of cases from his predecessor, Fatou Bensouda, including cases dealing with tensions with African countries, crimes in Afghanistan committed by the US Army, and crimes against humanity committed by Israeli authorities in Palestine.

“I solemnly undertake to fulfill my duties and exercise my powers as an ICC prosecutor honestly, faithfully, impartially, and conscientiously,” declared Khan during the swearing in ceremony at the seat of the court. On February 12, Khan was elected to the position of chief prosecutor for a period of nine years.

In his first speech after taking office, Khan said that the ICC considered it “an awful testament to the horrors of mankind that in this 21st century, as we send rovers to Mars… medieval crimes are being committed by modern people” including rape, slavery, murder, torture, attacks against identity, and the destruction of cultures.

In addition, Khan stressed the need to prioritize justice in the countries of origin or in the regions where victims live, because the ICC is a court of “last resort,” far from the place where crimes are committed.

He also mentioned the “lack of gender balance and geographical (representation)” in the prosecutor’s office, something that he considered “should be dealt with urgently,” as well as the harassment reports by employees.

Along with the challenge of extending the jurisdiction of the ICC to other states, Khan faces tasks such as deciding on the fate of several cases under preliminary examination, such as Bolivia and Venezuela, the admissibility of cases regarding Colombia, the Philippines or Guinea, and the investigations for crimes against the Rohingya in Myanmar, crimes in Darfur (Sudan), the Central African Republic, Libya, Kenya or Mali.

The ICC must also decide whether to continue investigating war crimes committed in the Palestinian territories, after Bensouda confirmed that there was sufficient evidence that both Israeli forces and Palestinian armed groups committed crimes for which the ICC has jurisprudence, a decision fought tooth and nail by Israeli officials.

Likewise, Khan inherits the controversial investigation of war crimes committed in Afghanistan, an issue that sparked a fierce dispute between Bensouda and former US President Donald Trump and prompted the US to issue illegal US sanctions against the prosecutor’s office. Neither the United States nor Israel recognize the ICC, but that does not legally prevent the court from ruling in these cases.

In her last words before her term ended, Bensouda delivered a clear message to Khan. The decisions of the ICC must be made “with careful deliberation—but without fear or favor,” she said. “Even in the face of adversity.” Bensouda warned of the political pressure being applied to the ICC.

In a career spanning over 25 years, Khan has worked for several international courts, both as a prosecutor and as a defender. He was the main defense attorney in the trial of the former president of Liberia, Charles Taylor, before the Special Court of Sierra Leone, and defended suspects of crimes in Kenya, Sudan or Libya before the ICC, among others.

Before moving to The Hague, Khan, 50, lived between Baghdad and New York, and since 2018 was head of UNITAD, the United Nations team in charge of obtaining possible evidence of the crimes of the Islamic State (IS), for use in an eventual trial of the terrorist group.

Khan, the third prosecutor of the ICC since its creation in 2002, is faced with the task of accelerating investigations, seeking funding for his office, and trying to increase the legitimacy of the Court, which has been criticized recently, particularly by African nations that levied accusations of bias, as they were subjected to probes while the ICC failed to investigate powerful nations like the United States.