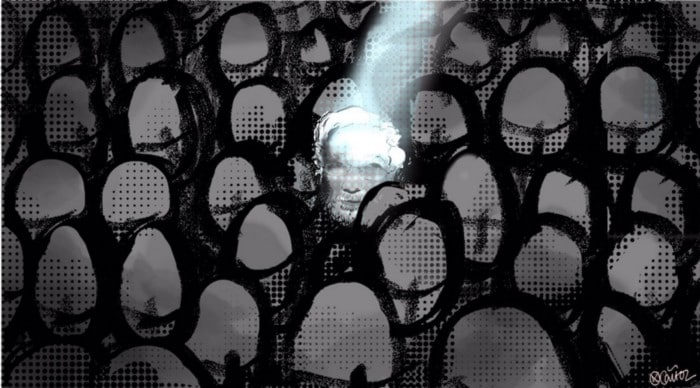 Capitalism will keep getting more and more unjust and exploitative until people force its end. You can try making it about elite globalist conspiracies and corrupt governments all you want, but ultimately it’s really just capitalism following its natural and inevitable course.

People whose ideology prohibits them from admitting capitalism is responsible for humanity’s existential crises need to make up other reasons for those crises. It’s the globalists. It’s the Jews. It’s corrupt politicians. No, it’s just capitalism doing what capitalism has to do. There are no specific groups or individuals you could eliminate from the equation to make capitalism move in a healthy way. As long as depravity is profitable and human behavior is driven by profit, humanity will always necessarily follow a depraved trajectory.

This doesn’t mean criticisms of individuals are invalid, they’re just not striking the root. Get rid of all the elites poisoning the world today and if you leave the same systems in place we’ll find ourselves getting screwed by the Whateverski family and some guy named O’Donnell.

So many of the popular theories in today’s conspiracy circles ultimately boil down to “Oh no, the elites are ruining the capitalism!”

No they’re not. They are perfectly embodying it.

The Assange case is this generation’s Nelson Mandela moment. Get on the right side of it or be forever judged by history.

Every news outlet and every journalist who is not speaking out for Assange with urgency and force is admitting they have no intention of ever challenging power in any meaningful way; they’re saying this trial poses no threat to them. They are admitting they are propagandists.

It’s so interesting how all these pedantic little transnational legal quibbles about Assange and WikiLeaks can be stitched together into a prosecution whose end result just so happens to look exactly the same as powerful governments imprisoning a journalist for exposing US war crimes.

The Assange trial looks different when you realize it’s actually just a collaborative performance by the US and UK governments to explain why it’s good to jail journalists for telling the truth.

If you can’t see that the US-centralized empire is the most destructive and oppressive force on this earth, then you won’t see any part of the rest of the world clearly either.

Prisoner: Let me out of this cell! I’ve done nothing wrong!

Prisoner: This key is three feet long and made out of foam!

Prisoner: This is impossible! What the hell is this?

Warden: We call it voting.

The outcome of the US election in November will have no meaningful impact whatsoever on humanity’s rapidly accelerating trajectory toward extinction, but it’ll be great for news media ratings.

Believing this new cold war is safe because we survived the last one is as sane as believing Russian roulette is safe because the guy passing you the gun didn’t get his head blown off.

The position that detente should be sought with China and Russia is not a position that says their governments are wonderful, it’s the position that the neoconservative ideology of US unipolar domination at all cost is not worth gambling the life of every terrestrial organism on.

The Iraq invasion killed hundreds of times more people than 9/11 and was vastly more evil than 9/11. If they lied to us about Iraq, they’ll lie to us about anything.

In a remotely sane world, war would be the last thing anyone ever wants and would be turned to only as a very last resort. In a world that’s dominated by an empire which seeks total planetary control, wars are planned as an ends in themselves and excuses are invented to get into them.

Psychology is the tool propagandists use to manipulate us into consenting to the status quo. The more you understand about the workings of your own mind, the easier a time you’ll have spotting all manipulations. See how you fool yourself and you’ll see how they fool everyone.