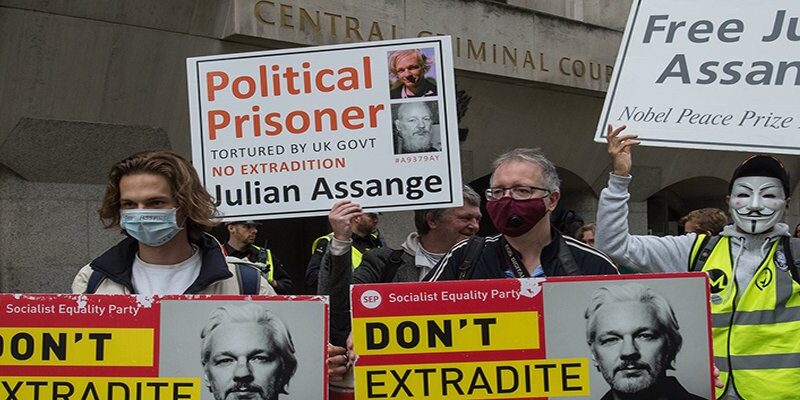 Trevor Timm, co-founder of the Freedom of the Press Foundation, tells a court that if the US prosecutes WikiLeaks founder Julian Assange, every reporter who receives a secret document will be criminalised

The prosecution of Julian Assange by the US government would set a legal precedent that puts journalists reporting on national security at risk worldwide, a court heard yesterday.

Trevor Timm, co-founder of the Freedom of the Press Foundation (FPF), told a hearing at the Old Bailey that the case poses extreme danger to journalists if it is allowed to go ahead.

“This would criminalise every reporter who received a secret document whether they asked for it or not,” he told the court.

Timm said this was almost a consensus opinion among first amendment experts, media law experts and lawyers, and was why “virtually every newspaper in the US has condemned proceedings before the court”.

Timm was giving evidence on the third day of an extradition hearing against WikiLeaks founder Julian Assange at the Old Bailey in London.

Assange, 49, faces 18 charges, including 17 under the US Espionage Act 1917 related to WikiLeaks publishing a series of leaks from Chelsea Manning, a former US Army soldier turned whistleblower, in 2010-11.

Assange has been charged with a superseding indictment, which introduces new allegations that he conspired with hacking groups to obtain classified documents, including publishing a list of the most wanted leaks.

Under cross-examination by Mark Summers QC, representing Assange, Timm told the court there was a rich history of reporters of all stripes reporting on sensitive or national security issues that the government considers classified.

“Every important story published in US papers contains secret or classified information,” he said.

Timm told the court that the FPF had developed a platform called SecureDrop to allow whistleblowers to share documents securely, which is being used by 80 news organisations.

Journalists and publishers had used SecureDrop to encourage whistleblowers to leak government documents.

The website Gizmodo, for example, bought advertisements to encourage government employees to leak information about US president Donald Trump and the Trump administration.

The US indictments suggest that Assange alone was encouraging people to illegally disclose classified information by publishing a list of most wanted leaks, but that was simply not correct, Timm said in a written submission.

The list was a collaborative document that anyone, such as journalists or human rights advocates, could edit, he said, and its use was not criminal.

“My position is that this indictment is clearly unconstitutional. WikiLeaks has a First Amendment right to say we would like to receive documents that show illegality,” he said.

If charges against Assange go forward, that would potentially incriminate other news organisations, Timm told the court.

James Lewis QC, representing the US, questioned whether Timm was acting as an unbiased expert witness with no conflict of interest.

Timm said the FPF considered the charges against Assange as a dire threat to the First Amendment of the United States and had donated $100,000 in legal support.

“My interest is press freedom,” Timm told the court. “Every single expert witness has some sort of fear that a prosecution of Assange will lead to the prosecution of many other reporters.”

It did not matter whether the US government considered Assange a journalist, that was beside the point, said Timm.

“He was engaging in journalistic practice as a publisher.”

“My interest is press freedom. Every single expert witness has some sort of fear that a prosecution of Assange will lead to the prosecution of many other reporters”

Lewis asked why Timm, as an unbiased expert, had not reported statements by the Department of Justice that the US was prosecuting Assange for publishing thousands of documents that identified informants, rather than obtaining classified documents.

Timm said he had not based opinions on reading Department of Justice press releases, but on what was contained in the indictment.

“There are several charges in the indictment that deal with the mere fact that WikiLeaks had documents in its possession,” he said.

Prosecuting Assange would rewrite First Amendment law whether you believe Julian Assange is a journalist or not, Timm told the court.

Publishing names of individuals ‘not illegal’

Lewis asked Timm whether a responsible journalist would publish unredacted documents that would put lives in danger when there was no need to have done so.

The idea of responsible journalism is entirely different from the idea of legal or illegal conduct, said Timm. “In this case, no court has said that the publication of those names would be illegal.”

Congress had debated introducing a law to make it a crime to publish human intelligence sources, following WikiLeaks’ publications, but the law was not passed.

“This tells me that publishing names was not illegal then and that it is not now,” he said. “In my mind, and the minds of many First Amendment scholars, this is protected by the First Amendment.”

Lewis read out an article by The Guardian criticising a decision by WikiLeaks to publish its full archive of 251,000 secret US diplomatic cables without redaction, “potentially exposing thousands of individuals named in the documents to detention, harm or putting their lives in danger”.

RELATED CONTENT: The Assange Trial, and Other Notes From the Edge of the Narrative Matrix

The five newspapers have since said that the prosecution of Assange is a direct threat to press freedom and are worried about the threat it poses to them, said Timm.

“There has never been a publisher charged with a crime for publishing this type of information. The Supreme Court precedent is almost wholly on the side of Mr Assange in this case,” he said.

Timm said that Trump had made thousands of disparaging remarks against the media, had sued journalists dozens of times in his life for reporting on him, and had privately mused about punishing journalists.

Timm said in his written evidence that if journalists could be charged with “conspiring” with sources to obtain newsworthy information for publication, that would fundamentally alter public discourse.

He said he was glad that Bob Woodward and Carl Bernstein, the journalists who brought down president Nixon, had not been charged with soliciting information from former FBI deputy director Mark Felt on the FBI’s investigation into Watergate.

Timm agreed with Lewis that he had not said anything about the role of grand juries in deciding if there was probable cause to bring charges against Assange in his testimony, as it was not his area of expertise.

“I do know in 2010 a study found that 99.9% of grand juries came back with charges to the point that if a prosecutor went to a grand jury it was almost guaranteed they would come back with an indictment,” he said.

Summers asked Timm about a charge against Assange under the US Computer Fraud and Abuse Act (CFAA), which alleged he had offered to assist Chelsea Manning with decrypting a password hash.

Timm said the government was not alleging that Assange stole documents himself or that he furthered the ability of Manning to obtain the documents.

“It is clear that this was a passing conversation, maybe 30 seconds, during many weeks that the journalist and source were talking about how to remain anonymous,” he said.

Manning was worried that she needed to protect her identity and the whole conversation was about anonymity, not Manning getting more documents.

“In general, journalists have always argued they have a strong right to protect their sources,” he said.

The government was using the charges against Assange as a fig leaf to bring a prosecution that would affect journalists everywhere, Timm told the court.