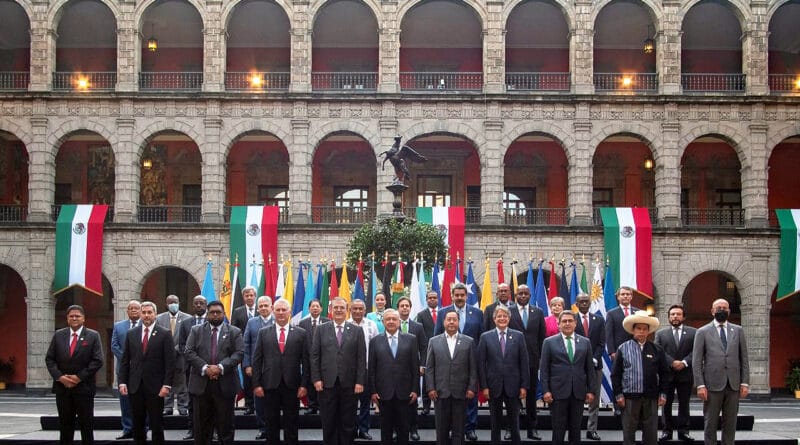 Saturday the world’s eyes were upon Mexico, which hosted the Sixth Summit of the Community of Latin American and Caribbean States (CELAC).  The historic summit saw the participation of 31 countries with 17 leaders of the member countries, including Cuba and Venezuela, who traveled to the capital of the North American nation to outline joint strategies to help overcome the COVID-19 pandemic and underdevelopment. While there was some dissension the overriding atmosphere of the meeting was to come together to get things done for the improvement of life in the region and concluded with a 44-point declaration.

The questions on the leaders’ minds were: How can equitable access to vaccines be guaranteed? How can we all get ahead amid the crisis since this is the region hardest hit by the pandemic? What is the best strategy to face climate change? Why does the Organization of American States (OAS), a group at the service of Washington that only promotes disunity in Latin America, remain relevant?

Cuba’s President Miguel Díaz-Canel, one of the first voices to be heard at the summit, began his speech by highlighting the country’s efforts to immunize the Cuban people with its own vaccines and in record time, despite the obstacles posed by the U.S. blockade against the island.

“We are proud to have succeeded in producing three vaccines and two candidates in recent months, thanks to the dedication of our scientists and our strong science and technological innovation system, created and promoted by Fidel Castro Ruz,” Díaz-Canel said. “Consider these successes as a Latin American and Caribbean accomplishment.”

The island has moved forward even under the economic harassment and limitations imposed by Washington. This achievement proves the solidness of our public health system and the capacity to continue cooperating with other countries, the leader added.

This reality is far from that of other Latin American nations, which have been forced to wait for vaccine donations from the great powers or for vaccines to be available in the international market.

For this reason, one of the main consensuses reached during the meeting was to approve a regional plan to have access to vaccines, equipment, and COVID-19 tests, according to the Executive Secretary of the Economic Commission for Latin America and the Caribbean (ECLAC), Alicia Bárcena.

To achieve this goal, member states will promote coordination between national regulatory agencies, create purchasing mechanisms to ensure universal access to vaccines, and implement a regional platform for the antidotes’ clinical trials. Several immediate actions were approved including the creation of a fund to address the impacts of climate change, and calls for the creation of infrastructure to produce and distribute medical supplies and vaccines, especially the Cuban-produced ones, to help countries face the COVID-19 pandemic.

“We created our fund to counteract the climate change effect due to the delay of capital offered to us by developed countries long ago. Although it seems a modest sum, in the last few hours, we have raised more than $15 million USD,” Mexican Foreign Minister Marcelo Ebrard stated. “It means that Latin America and the Caribbean will no longer face the same situation as we did in 2020 and 2021.”

This proposal is in line with the call made by Cuba at the regional meeting, which resonated as one of the most important reflections of the meeting: “In the face of growing attempts to divide us, it is urgent to promote solidarity and cooperation to consolidate Latin America’s greatest strength, our unity in our diversity.”

Another idea that marked the meeting was that CELAC needs to become the main instrument to consolidate relations between our Latin American and Caribbean countries, and achieve the ideal of economic integration within a framework of respect for our sovereignty.

“CELAC is the best alternative for our peoples, and not the OAS, which acts against the principles of democracy,” said Bolivia’s President Luis Arce. “Its interference in Latin American countries’ internal affairs hinders the peaceful resolution of local conflicts.”

For Mexican President López Obrador, it is time to end the lethargy and propose a new and vigorous relationship between the peoples of the Americas: “We need to replace blockades and bad treatment policies with the option of respecting each other, walking together, and partnering for the good of the continent without infringing on our sovereignty.”

And Díaz-Canel agreed. “It is urgent to strengthen CELAC, which is this unique mechanism that allows us to dialogue as a group of nations with similar needs and interests. Let us not miss the opportunity to continue making history.”

Featured image: CELAC Summit of Heads of State and Government stand for photo in front of Mexico’s government building.