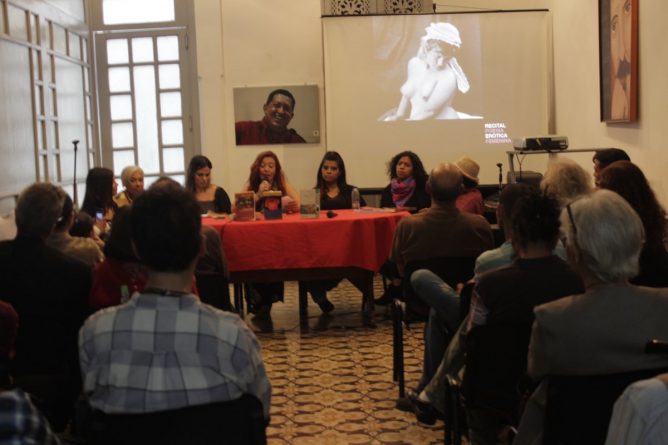 The activity, held at the Casa de Nuestra América José Martí, in Caracas, was attended by Maribel Prieto in moderation and the poets Ivonne Thompson, Yanuva Leon, Maria Eugenia Inojosa, Indira Carpio, Nidesca Suárez and Rossana Marín, who went through the most intense poems of the writer, among them “Root”, “Ama”, “For the beautiful faun snatched away “,” The woman of fire “,” He has looked at me again “,” I knew you should arrive “.

This meeting, allowed to delve into the eroticism present in the lines of the Maracaibo born, recognizes the avant-garde value of Calcaño, whose work, although brief, has a place in the collective memory of poets.

In addition, in her work you can find overtones of class recognition, by naming the workers, the poor mendicant woman, who not only does it to make the disadvantaged visible, but also because to some extent her subject of poetic discourse seems to be recognized in a class that is not that of the rich.

According to the poet and researcher Maribel Prieto, Calcaño was a passionate woman with a shocking poetry that “gives possibilities of human emancipation to women.” Yanuva León, who read the poem “Ama”, defined the author’s work as audacious; “We are directly concerned with women,” she said.

Calcaño, whom the gender obstacles encountered in life and the fact that her work was hidden for decades led her to obtain a late recognition, knew how to work with great versatility both the form and the content, transiting through the verse and the prose, according to her convenience.

Her poetry can be presented as follows: Fatal wings (Santiago de Chile, Edit Nascimento, 1935), Annotations and other fragments (1920-1940), The Hermetic Astonished (1938), Songs that my last dolls heard (Caracas, Association of Writers of Venezuela, 1956), and Between the Moon and Men (Maracaibo, Ediciones Amigos, 1961); finally, her diaries and fragments of letters are published in Pages of a forgotten newspaper and other stories [1916-1956] (Caracas, Monte Ávila, 2012).