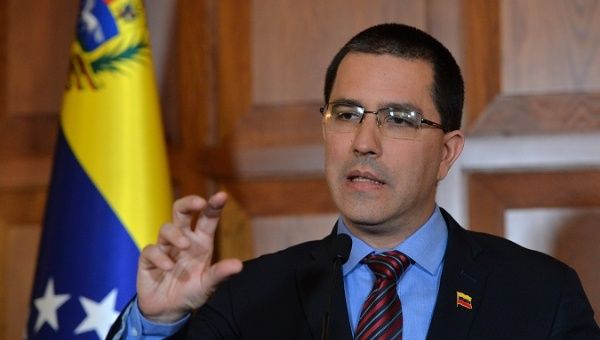 The sanctions, according to Washington, will be placed on 34 ships operated by Venezuela’s state-run oil company, Petroleos de Venezuela, S.A.

The government of Venezuela sternly rejected Friday the new sanctions against the Bolivarian Republic, announced by U.S. President Donald Trump’s administration, which targets the transportation of oil shipment between Venezuela and Cuba.

In a public statement, Venezuelan Foreign Minister Jorge Arreaza rubbished the sanctions, pointing out that “while the U.S. government boasts of defending economic and commercial principles, it announced sanctions today against Venezuelan vessels and transportation in order to affect the delivery of oil to its sister Republic of Cuba.”

The sanctions, according to Washington, will be placed on 34 ships operated by Venezuela’s state-run oil company, Petroleos de Venezuela, S.A. Two international companies that conduct shipment transport between the two countries will also have sanctions levied on them.

The U.S. government has, in the past, remarked that Cuba is too closely allied with the Nicolas Maduro-led government.

The United States has expressed the need to “recalibrate” Venezuela-Cuba relations. The new sanctions aim to punish the Caribbean country for longstanding support of the Bolivarian government.

The oil-targeting embargo will jeopardize partnerships for Venezuela and Cuba, as the U.S. aims to deter other countries from effecting collaborations by threatening sanctions.

“It makes Cuba and Venezuela even more radioactive,” Russ Dallen, a specialist in the Venezuelan oil industry, stated.

Arreaza calls the sanctions a violation of the country’s “most basic economic and commercial rights, and questions how “a member-country of the World Trade Organization” and so-called “defender of liberal principles” would impose such measures.

“[The sanctions] aim to do harm, not only to the countries of Venezuela and Cuba, but also the businesses and commercial associations that should instead benefit from international protection,” Arreaza added.

Arreaza also noted that, regardless of the continued efforts by Washington to disable Venezuela’s economy, “no act of imperialism will stop the cooperation between free and independent countries.”

The minister concluded the statement by warning the United States of Venezuela’s plan to respond to the sanctions “through the corresponding legal channels.”