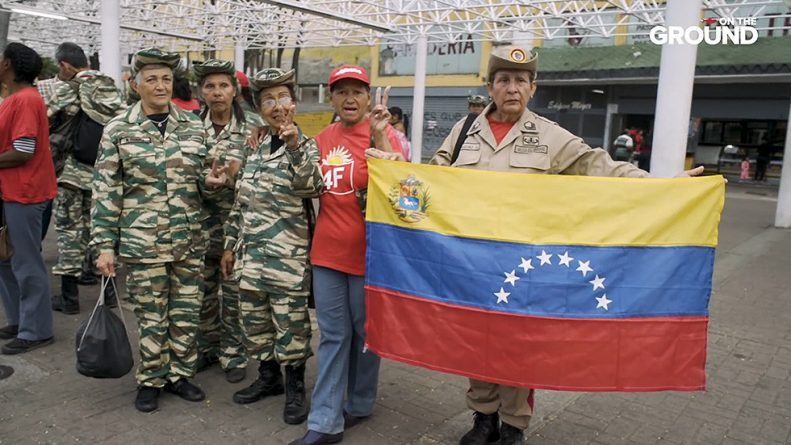 Ever since the US recognized Venezuela’s wannabe coup leader, pro-government activists have been bracing for possible military intervention. Western media have been for years portraying them as thugs of the dictatorship.

So-called ‘colectivos’ caught the eye of the Western mainstream media around 2011, depicted as government-sanctioned gangs who are allowed to commit crimes in their neighborhoods with impunity as long as they serve as vigilantes against the opposition.

The term comes from much earlier times in the 1960s, when it was used to describe self-organized local political action groups banding together for various causes. An indigenous tribe opposing logging on its ancestral land, a local volunteer radio station going on air to discuss local politics, or an ad hoc labor union negotiating better conditions are all examples of colectivos.

The government of Hugo Chavez found natural allies in colectivos stemming from poorer communities, which were the focus of various programs to eradicate poverty, provide basic education and healthcare. The groups, with their experience of collective action and networking, became part of Venezuelan society and served as volunteer organizers for elections. Today, the government claims that 1.6 million people, or one-in-20 Venezuelans, are members of colectivos.

Ruptly’s short documentary maker Redfish spoke to members of some of these groups, asking what made them join and what they gained from their decision. People spoke about empowerment, politics and, yes, violence. They are training to use arms and prepare for an insurgency, should the US deliver on its threat of military invasion.

“The militia is all of us. It’s the people,” one colectivo member said. “It shouldn’t be taboo to say this.”

Watch the report to learn more.