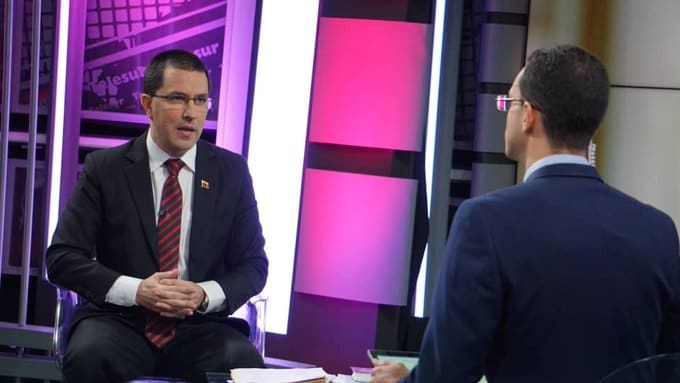 Venezuelan Foreign Minister Jorge Arreaza denounced the new blackmail of the United States (US) government and the “savagery” it uses against Venezuela in violation of International Law.

“Imperialism is in the worst of its facets, it violates the Venezuelan Magna Carta and the Charter of the United Nations,” Jorge Arreaza said after US President Donald Trump said Friday that he considered the possibility of imposing a quarantine or a blockade on Venezuela.

In an interview granted on Friday to the Caracas based network Telesur, Arreaza cataloged this measure as “crimes against humanity” because if implemented it would violate “the human rights of 30 million Venezuelans” and will have a great effect on the country’s economy.

He also attacked the US Administration for using “savagery” precisely when the Government and the opposition sectors are struggling to get points of possible agreement in the negotiations they have held in Barbados, under the mediation of Norway.

“They are making us all go hungry, suffering. They are attacking the stomach and the life of the people thinking that they will not resist, but the people trust in their government, in the State,” he emphasized while criticizing Washington’s sanctions against Caracas that according to a recent study prepared by economists Mark Weisbrot and Jeffrey Sachsen, have killed some 40,000 Venezuelans in the last two years.

In reaction to Trump’s new threats, Venezuelan President Nicolás Maduro called on the nation on Friday to prepare for battle and said his government will denounce the United Nations Security Council (UNSC) to the United States for its policy of threats and pressure.