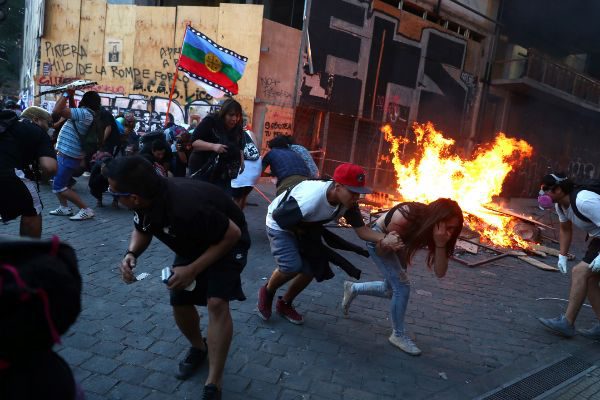 On Tuesday Chile experienced one of the most complex days since the beginning of the social outburst that began almost a month ago. The general strike called for this day included multiple incidents, repression, barricades and fires in different regions of the country, as well as another death to increase the list to 24 deaths in less than four weeks. Meanwhile the Chilean peso suffered a significant devaluation, the ghost of a slowdown in the economy was beginning to appear and the relationship between the government and opposition forces is straining in the face of a new National Constitution that Pinera is trying to create behind closed doors and away from the public.

As the strike unfolded, stock market operators and investors in Sanhattan, Santiago’s financial center, looked with astonishment at the indices that were plummeting on their screens. The dollar traded at 787 Chilean pesos, a devaluation of almost five percent from Monday; the Chilean currency has been falling to lows not known in two decades. Chile’s GDP, which has been growing steadily for 20 years, could contract this month, according to estimations by a group of experts convened by the Santiago Chamber of Commerce today. What may happen in 2020 is uncertain, they added.

Chile’s state of social upheaval began almost four weeks ago when a student protest over an increase in Santiago’s subway prices grew to unexpected levels. Much of the Chilean capital’s subway network was crippled, President Sebastián Piñera reacted by giving the military control of security and imposing a state of siege, and 1.2 million people demonstrated calling for change.

The balance so far is 24 dead, thousands injured and 201 people who lost all or part of their eyes due to the pellets used by the Carabineros, the country’s military police. There are also a large number of reports of human rights violations, ranging from physical abuse to sexual abuse, including murders attributed to the security forces.