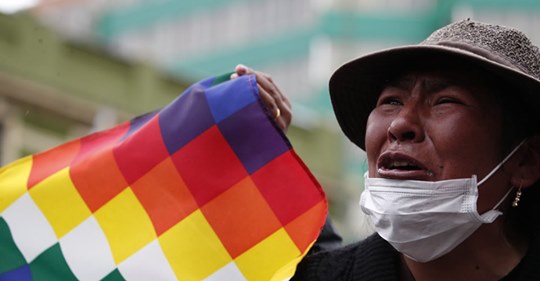 How could the political process in a country that ensured so much equality in Latin America and the Caribbean collapse?

Perhaps its answer lies in the question itself.

The local and international right never forgave Evo Morales, an Aymara native who became the peasant who faced off against neoliberalism’s destruction, for nationalizing Bolivia’s natural resources on May 1, 2006 – only three months after assuming the Presidency – and for convening a Constituent Assembly granting rights as never before to social majorities and especially to the native aboriginal peasantry.

The coup in Bolivia today marks a dividing line not only among anti-imperialist but democratic proponents, who are sheltering on the slightest mistakes committed by the Evo Morales Administration to justify or look away in the face of the coup against real democracy that was underway in the Andean-Amazon country.

A civic-police coup, in connivance with the armed forces and pushed by an unprecedented wave of violence that is burning the houses of the MAS party militants or kidnapping people, headed by a racist and reactionary Right, has to be called a coup d’état without any further euphemism.

And if Eduardo Galeano wrote that Latin America’s history is the history of the looting of its natural resources, it seems unnecessary to point out that it is also the history of the United States meddling in its backyard. Meddling through coup d’états but also through control mechanisms such as the Organization of American States (OAS). An OAS with direct responsibility in this coup not only by omission but by action. This agency manipulated the public opinion in Bolivia and abroad without a single shred of evidence that there was fraud, except for irregularities common in any electoral process which would never change its final result. Evo Morales’s and the Movement to Socialism victory was won by a ten percent difference victory over Carlos Mesa. In any election anywhere that difference is considered a decisive victory. Responsibilities should also be clarified about who pushed within the Bolivian Government to accept as binding the OAS and Almagro’s audit, which is the same as mentioning the U.S. Department of State, amidst a setback in Latin America’s political integration through which the U.S. lackeys have destroyed UNASUR and emptied CELAC.

There can be no doubt about the role played by the United States in the crisis following the electoral victory. Even though the U.S. Ambassador, the DEA, and the USAID were expelled from Bolivia, the CIA bureau inside the embassy in La Paz continued operating during the last years, dividing the social movements in several areas of the country.

It’s necessary here to acknowledge Evo Morales’ integrity and leadership, stopping a process that cost the life of so many people in El Alto and in Bolivia in general during the years prior to 2006. It is no coincidence that this political crisis is carried out with few deaths so far due to government repression; different to what happens in Chile, Ecuador, Honduras or Haiti – all these cases with the OAS as a silent accessory.

Evo preferred to seek shelter in Mexico instead of entrenching himself in his stronghold to lead a counteroffensive against a Bolivia without government; without quorum to appoint an interim president in the Pluri-national Legislative Assembly (MAS has 2/3 of the required seats to pass a vote); without a national opposition leadership beyond regional leaders; and where the resistance to the coup continues growing, especially in El Alto. Contradictions in the heterogeneous opposition bloc, the army, police, and economic elite will not last and soon the interests behind the coup will be unveiled.

There will be enough time to analyze the mistakes committed by the Evo Morales popular government in these times of post-truth, when a coup d’état is justified without anyone providing a single evidence of fraud – not even the OAS. But these are times of resistance now. Times of taking care of comrades persecuted for their political ideas and creating a global solidarity movement with Bolivia’s process of change and its indigenous, anti-imperialist, anti-capitalist and anti-colonial President. These are times for organizing a long-term local resistance.

Bolivia is not Venezuela, and its process of change is not the Bolivarian Revolution. But Evo is Hugo Chavez, he is Salvador Allende, he is Nelson Mandela, he is everyone and each of the people fighting for a better world with social and environmental justice.

We are all Evo.