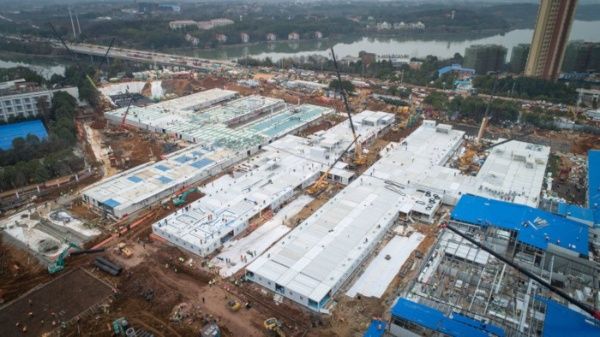 Chinese authorities finished a hospital in record time in Wuhan, the epicenter of the viral epidemic, which will treat patients who have been infected by the new coronavirus starting tomorrow (Monday February 3rd).

After the emergency that arose with the outbreak of the disease at the end of December, Wuhan, capital of central Hubei province, with more than 11 million inhabitants, is the scene where thousands of people have contracted the virus and hundreds have died.
The new facility, Wuhan Huoshenshan Hospital (Mountain of Fire God), built at the request of Chinese President Xi Jinping, covering an area of 25 thousand square meters, will have 1,400 army medical personnel treating patients.

The new hospital, which has 1,000 beds, is provisional and is being built in record time to treat patients infected with the new coronavirus, the Xinhua news agency reported.
The hospitals in Wuhan, a quarantined city, are overwhelmed by the flow of patients affected by pneumonia, or simply fearing contagion.
In addition to the hospital that will begin operations tomorrow, the Chinese authorities are building another facility, against the clock, in the city of Wuhan.

RELATED CONTENT: Venezuela and China Strengthen Bilateral Relations (Arreaza – Qishan Meeting)
Leishenshan Hospital (Mountain of the Thunder God), will have a capacity for 1,500 beds, and expects to receive patients starting February 6.
According to the government, the budget for construction and for the material of the two hospitals amounts to 300 million yuan (US$ 43 million).
The team assigned to the task is composed of 950 hospital professionals affiliated with the Joint Logistic Support Force of the People’s Liberation Army (EPL) and 450 medical universities of the army, the Navy and the EPL air force.
Several of the military medical professionals who will serve in the hospital participated in the fight against SARS (severe acute respiratory syndrome) in Beijing Xiaotangshan Hospital or in the mission against Ebola in Sierra Leone and Liberia, so they have rich experience in the treatment of infectious diseases.