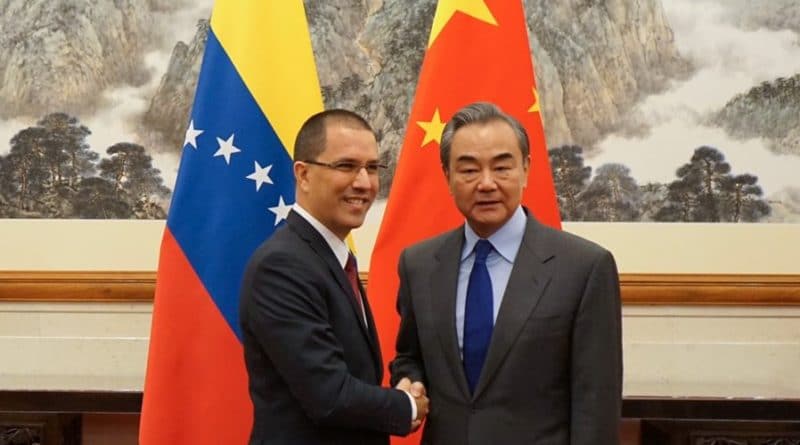 As part of the official and working visit to the People’s Republic of China, the Minister for Foreign Affairs, Jorge Arreaza, met with the Vice President of the Asian nation, Wang Qishan, the Minister of State and Minister of Foreign Relations, Wang Yi and the Minister of the International Department of the Central Committee of the Chinese Communist Party, Song Tao.

During the meetings, both parties discussed the progress and possible challenges of the Strategic Partnership between China and Venezuela, and also reviewed the bilateral relations held by their governments.

“The development of the relationship with Venezuela has been exponential since 2001, surpassing 500 joint projects, binational funds, energy production and in the most diverse areas of our economies, in addition we particularly want to thank the government of the People’s Republic of China for always being on the side of respect for the sovereignty of Venezuela (…) we always take as a reference the role of peace that it has in the world,” said the Venezuelan Foreign Minister.

The meeting allowed us to remember the historical origins of China and Venezuela and the ability of both nations to avoid foreign domination over the years.

During the meeting with Wang Yi, the representative of the Bolivarian peace diplomacy highlighted: “In 2019 Venezuela was at the epicenter of the events in Latin America, attacked by the United States, and we have had the solidarity and deepening of cooperation with the People’s Republic of China. ”

Therefore, he was emphatic in ensuring that “there is no force that can disturb our relationship and comprehensive strategic partnership.”

Similarly, the Minister for Foreign Relations recognized the role that China plays in diplomacy and peace geopolitics, it is fundamental in the world, in addition to being an example to follow from the economic point of view. “China is a great power that is about to become the first great economic power, and for Venezuela, for the construction of our socialism, it is a great reference.”

It should be noted that this is the first Venezuelan official visit that the Chinese government receives in the year 2020.