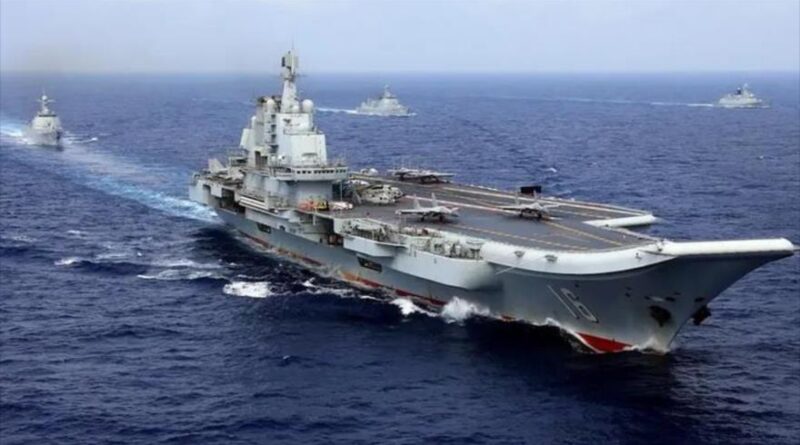 China has responded to US provocations in the Pacific by sailing its Liaoning aircraft carrier and five escort vessels near Japan.

The Joint Chiefs of Staff Office of the Japanese Ministry of Defense announced on Sunday that the Chinese aircraft carrier and its strike group were spotted around 8 a.m. local time on Saturday, approximately 470 kilometers southwest of the Danjo Islands of Nagasaki Prefecture, reported the Japanese newspaper Nikkei on Monday.

The Chinese fleet—composed, in addition to Liaoning, of a Renhai-class stealth guided-missile destroyer, two Luyang III-class guided-missile destroyers, a Jiangkai II multi-role frigate, and a Fuyu-class fast combat logistics support ship— then passed through the Straits of Miyako, the 250-kilometer wide waterway between Okinawa Island and Miyako Island.

The report also said that a Chinese Y-9 military transport plane flew over the Miyako Strait on Sunday, to which Japan responded by sending a military aircraft to intercept it.

Alarmed by the passage of the Chinese fleet near its waters, the Japanese Navy also sent the destroyer JS Suzutsuki, a P-1 maritime patrol plane and a P-3C anti-submarine warfare patrol plane to the area to collect information and monitor the movements of Chinese ships.

This is the first time since April 2020 that the Liaoning has passed through the Miyako Strait, and it comes just days after the US and Australian navies conducted joint military exercises in the eastern Pacific Ocean.

The moves come after the US stepped up cooperation with its partners, reinforcing the anti-China political-military alliance, called the Quadrilateral Security Dialogue forum, also known as the Quad, to counteract the Asian giant in the Pacific and Indian oceans. In addition to Washington the alliance includes Japan, Australia, and India.

Beijing, in turn, considers this alliance as a “small NATO” (North Atlantic Treaty Organization), destined to slow down its development, and accuses the US of destabilizing the Asia-Pacific region and creating tension between the countries in the area.